All Roads lead to Rum…

Mindelo is a must for all hikers attracted to the legendary beauty of the island of Santo Antão. This vast island, 300 square miles in size, is sparsely populated (just over 48 000 inhabitants) and the westernmost and largest of the Barlavento Islands of Cape Verde. Santo Antão is also the second largest Island in the archipelago after Santiago. The São Vincento channel separates Santo Antão from São Vincento, the nearest island to the Southeast. Santo Antão is magnificent and the marked hiking trails are getting gradually better. The trails are unforgettable for nature-lovers, and the horizons vast and wild. For Cape Verdeans, even non-natives or those who do not live there, it is a «beautiful island». It is an island of water, so precious in Cape Verde, with cultivated terraces on steep hillsides, the ever-present and invigorating perfume of “grogue,” and sometimes inaccessible green valleys… The hour-long ferry ride from Mindelo (São Vicente) to Porto Novo (Santo Antão) is enlivened by « Poss » or flying fish jumping out of the water and flying several hundred of feet, even bouncing from the crest of one wave crest to the next… Some may hum an adaptation of the song by Barbara of Black Eagle, “Lentement, les nageoires déployées / Lentement, je le vis tournoyer…” in English”Slowly with his fins [wings] spread / Slowly, I saw him spin…”

Topo de Coroa at 6,493 feet is the highest mountain on Santo Antão and the highest in Cape Verde after Fogo. Santo Antão, made entirely of basalt, is one of the most mountainous of the Cape Verde islands. A mountain range divides the island into North and South, creating an island of contrasts. The south slopes have an arid climate while the wet north supports plantations and crops. From Porto Novo, take an aluguer (taxi) towards the Estrada da Corda (road rope), a paved road from Porto Novo (Southeast) to Ribeira Grande (Northeast)… Its tightrope-like route is littered with countless curves and its shiny cobblestones, set by hand, of unequal size make it look like a paved mule trail,.. but today mules are watching the aluguers… First, we climb the southern slopes of the arid island. At the summit we have a breathtaking view of São Vicente and San Nicolau emerging from the mists, and vegetation begins to grow.

Santo Antao – The south slopes have an arid climate

We hike along the crater of Cova, a sleeping volcano crater lined by a checkerboard of vegetable crops. The place is also very ornate, with endemic plants such as the Linga of Vaca (cows’ tongue or viper because the leaves are like the rasping bovine tongue) or Jacaranda, also called “flamboyant blue” originating from South America (Paraguay, Uruguay, Southern Brazil and Argentina). We continue climbing into a pine and mimosa forest, and we pass narrow ridges on wet heights with the astonishing freshness of Delgadim. On the North side, the landscape is greener, crops cascading from terrace to terrace: sugar cane, cassava, yams, coffee, bananas… a green valley dotted with trails passes small hamlets.

First, we descend to Ribeira Grande in the Northeastern part of the island on the Atlantic and then continue to Ponta do Sol by the coast road, a steep hill road but ever so beautiful. Ponta do Sol is the Northmost town of the Island and located about 2 miles North of Ribeira Grande and about 15 miles from Porto Novo. The road that terminates in Ponta do Sol follows the sinuous outline of steep cliffs, some over 400 meters high, that plunge into the rough Ocean below. Suspended between sky and sea, we move forward to the sound of waves crashing against the cliffs. The ocean is omnipresent, yet unattainable… Along this rough side of the island there are no beaches for bathing, but there are saltwater swimming pools, in Sinagoga for example, where you can taste the joys of paddling (Beware the many urchins!). The water is crystal clear. Even from above, you can admire the fish. A real open-air aquarium! The fishing port of Ponta do Sol is dangerous for boats to enter because of the violence of the waves and the current. An esplanade with stone walls protects the port from the often tumultuous ocean forming the Boca da Pistola (gun mouth) that boats must cross to enter and leave the port. In the past, large ships anchored offshore and small row boats called Botes were used as commuters to load and unload people, animals, water, and goods. Today the port is only the starting point for subsistence fishing, with its ramp for pulling fishing boats from the water, its numerous traps, lines and nets… and its tasty fish as Serra or wahoo… Come on, everyone to the table!

The Paul Valley, pronounced “Paoul,” is probably the most attractive valley of the island, one where water flows and where crops cascade from terrace to terrace: sugar cane, cassava, coffee, yams (Tarot) and banana, breadfruit trees, and almond trees. Did you know for example that banana leaves are used by Cape Verdeans for decoction (boil the leaves in hot water) and to treat chicken pox. A dense network of levadas makes irrigation possible in this hilly terrain, and we can only admire the patchwork of crops at our feet thousands of different shades of green. We agree without any doubt with the title of the 1939-novel by the British author Richard Llewellyn, “How Green Was My Valley,” made into a classic Hollywood film staring John Ford in 1947. From the hiking trail, we can make out many fragmented plots, sometimes tiny, for growing vegetables… and yet the small fields of cabbages and sweet potatoes… are all along the way. In the hamlets there are traditional mud houses topped with thatched roofs and adorned with beautiful bougainvillea. There are also many fruit trees such as papaya, guava, huge mango, breadfruit, coconut, almond. And then there is the Dragon tree, a species endemic to Macaronesia, known for its tonic, astringent, and, allegedly aphrodisiac, proprieties (local myth or reality?). 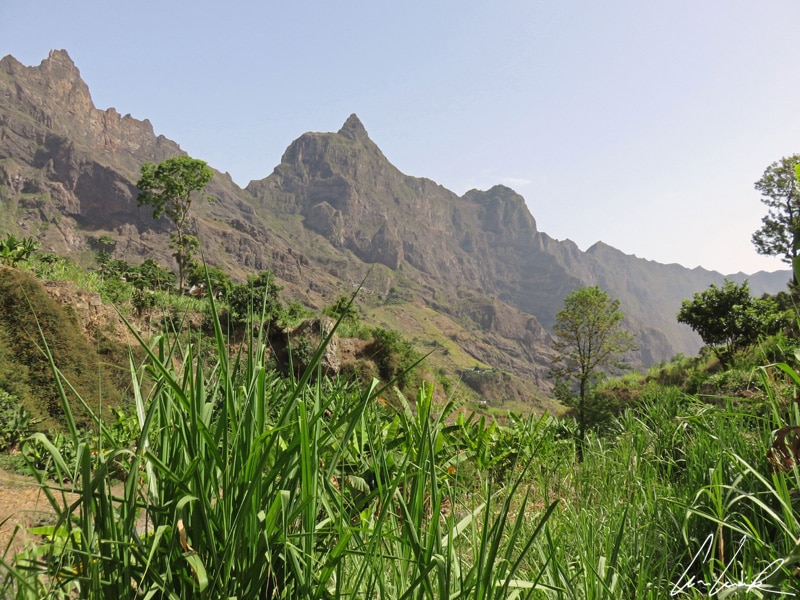 Sugar cane is used to make molasses and the local rum drink called “grogue,” which is very popular throughout the archipelago. Sugarcane was introduced to Cape Verde in the early 16th century from Madeira, another Portuguese territory, to produce sugar for Europe. Grogue production remains small and entirely artisanal, almost hidden among the cane fields. The cane juice is extracted through a press known as a trapiche, originally operated by oxen mechanized. The circular press turns cylinders to draw juice from the cane. The juice is then left to ferment for a few days before distillation. The alembic is cleaned with ashes and lemon and then rinsed and dried. In a dry stone oven a fire is fed with cane leaves. All the sugarcane is used in the production of the alcohol. The fermented cane syrup is then poured into the still to be heated, and the vapor is cooled by condensation in a pipe that runs through a fresh water basin. The island of Santo Antão is renowned for its grogue. The tradition is to allow the rum to age for several years in oak kegs to obtain vehla grogue (aged rum) recognizable by its amber color, and unlike the white-colored young grogue. For fans, one of the most famous rums comes from the Paul Valley ! Now, is time for grogue tasting… a choice of grogue with orange, coconut, or caïprinihia from passion fruit or pure rum, punch and other specialties. And as they say, Bastá bô t’ bibé, l’tá tro’b fom’ (Just drink and don’t feel hungry). 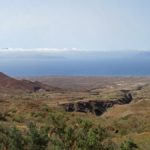 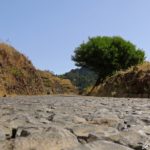 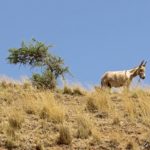 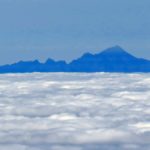 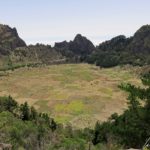 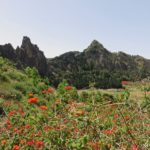 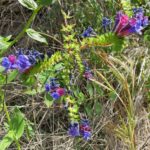 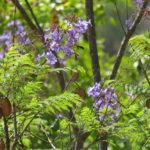 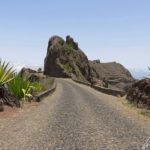 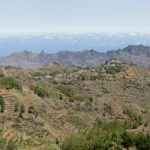 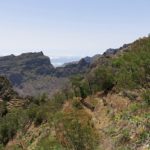 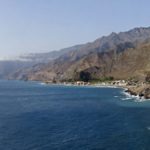 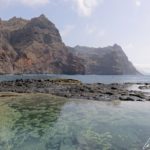 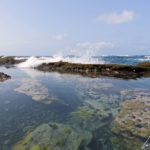 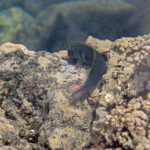 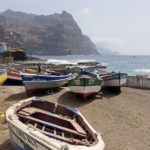 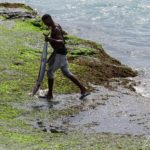 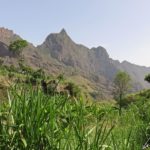 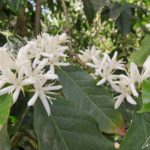 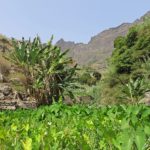 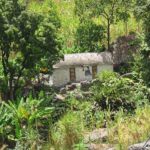 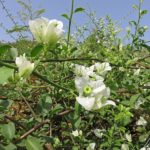 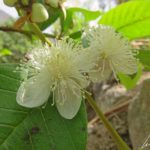 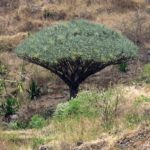 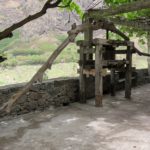 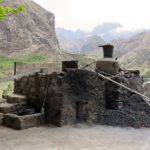 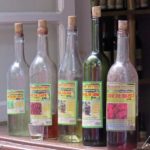 This looks amazing. Some quality photos!

What a beautiful place to visit. These pictures are so pretty. Thanks for sharing!

Cape Verde has become a popular package holiday destination for those seeking some winter sunshine, but there is so much more to the islands than just topping up your tan. Cape Verde has many more treasures 😉

That local rum drink sounds exactly like what I need right now. A couple please 😉 Amazing views, very informative post, thank you for sparking my wanderlust !

Most of the visitors come to Santo Antão to hike. Running along steep bluffs and cutting into deep valleys, hiking on the coast of Santo Antão will give you stormy beaches and quiet villages… And of course the local rum is tasty !

Your photos are stunning! This place looks fabulous. I’d love to explore it. I’d want to try that sugarcane.

Thanks a lot ! Santo Antão is a true hidden gem. And if you enjoy hiking in dazzling heights… and rum, this island is the place to be 😉

What amazing views! I’m a novice hiker myself, but that scenery is well worth it! Thank you for putting Santo Antao on my radar, I probably wouldn’t have heard about it otherwise and that would be such a shame.

Every morning I woke up full of joyful anticipation to discover new hiking trails through this imposant natural setting. And there are plenty of hikes to do !

Wow… what a magical place! I heard about the rum that get aged 🙂

Santo Antão is like a fresh breeze full of green oxygen ! The greatly contrasting landscapes triggered so many profound sensations that make it difficult for me to put them to paper. Yes, it’s a magic place and the grogue is very good 😉

I need that local rum drink especially that our weather is so gloomy and I guess we have a typhoon. It will help me to stay warm. 🙂

Oh my God ! For sure, you need a grogue. This strong rum-like drink made from sugar cane would definitively help 😉

This place is quite similar with my native place. No pollution no traffic … Every thing so natural.

Oh, yes… I nearly found a paradise ! A land full of tropical fruits, coffee and foreign vegetables. With people so easy-going that you think that you know them since forever. A land where hard physical work pays off and nobody will ask you for a handout 🙂

Rum + amazing landscape = the dream!! This post made me catch the travel bug again!

What is it that makes every visitor fall in love with Santo Antão ? Maybe the breathtaking views, the staggering hights, the infinite quantity of hiking and trekking trails, the kindness of its people, its large variety of fruits ? And of course the local rum…

I would have loved to go hiking here. The views are absolutely incredible. Then sip on some rum and grogue 🙂

Santo Antão is a cluster of high peaks cut by steep, lush valleys. Cobbled paths lead you up past sugar cane and banana plantations crowded on to narrow terraces, to the spectacular ridge tops. And you can’t leave Cape Verde without having tried its national drinks: Grogue and Ponche… All taste great !

Great post! I absolutely love the views, it reminds me of back home since we live in an island with mountains and hills near the coast. A local rum drink? Sounds like an adventure.