From Hell to Heaven…

Sta fish (Everything is fine) Although the official language of Cape Verde is Portuguese, it is only heard in government offices and on the radio or television. The actual spoken language is Creole or rather “Creoles,” since each island has its own variant or dialect. The nature of the archipelago, the chronology of its settlement and the different influences on ist development explain this diversity. If there were one word to describe Cape Verde, “diversity” would be it: diversity of nature and of encounters. There are so many contrasts between the islands and even on a single island that we change universe every time we change place! Welcome to Fogo one of the Sotavento islands of Cape Verde and neighboring the island of Santiago, both geographically and historically. Fogo is best known for its majestic towering volcano. Have you ever dreamed of being in the heart of a volcano that last erupted barely a year and a half ago ? From the end of November 2014 through January 2015 the stratovolcano Pico (9,281 feet) passed through a period of intense activity (the last previous eruption was in 1995). A river of lava flowed down its southern flank, covering two important hamlets of Chã das Caldeiras and depriving 1,500 people of their homes, schools, and some valuable farmland. Even if it is dangerous to live near an active volcano, the fact remains that the eruptions act as a true fertilizer “fallen from heaven.” The ashes are rich in minerals (iron, magnesium, calcium, phosphorus, selenium, potassium and sodium) and serve as food for plants that reappear at a faster rate than average.

In Fogo, everything seems dark: rocks, sand from the beach (as at Ponta das Salinas) where you meet strange bathers, the color of new and old lava… all this creates a unique environment! You are instantly caught up in this supernatural landscape, desolate landscape with a unique beauty. It feels like being on another planet! Even the local wildlife seems to adapt to the landscape. A nearby goat seems ready for the next Venetian Masquerade… Talking about animals, when we passed through the city of Mosteiros, a dog ran after our taxi and our guide said, “I give back your change.” Astonished by this anecdote, we asked for an explanation. What, you do not know the story of the goat, cow, and dog that stole a taxi? Just for you, here is the story: a goat, a cow, and a dog took a taxi. Once at the destination, the cow paid in exact change, the goat ran away without paying, and the dog had money but no small change. The driver took the money from the dog and said he would return the change… Therefore dogs run after taxis to get back their change, goats flee at the sight of taxis in fear of having to pay the fare, and cows watch them pass with indifference… 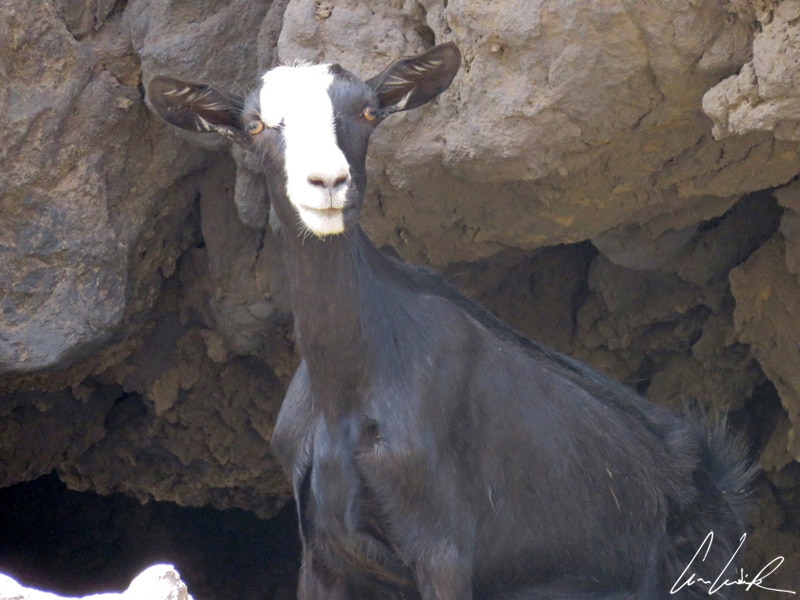 Fogo lives in the rhythm of the passage of the Cape Verdean emigrants to the United States. A long connection between the island with a volcano and the New World started at the time the islanders first boarded American whaling ships that came to recruit crew members. This marked the beginning of the Cape Verdean diaspora in the United States. Now the economy of the island is based on tourism, wine, and coffee, a product whose reputation extends well beyond the island. Fogo‘s coffee, a sweet and fragrant altitude arabica, was recently ranked the third best in the world. Fogo‘s vineyards runs freely along the ground and bear large grapes that produce a full-bodied, fruity red wine, the Manecom. There is also white wine produced from Muscatel grapes, like those in southern Italy. On the volcanic slopes of Pico do Fogo, locals grow cotton (a bit dry!), Pomegranates, quince, apples, ricin or the castor plant (Djag-Jag) used to produce a laxative oil. On the coast, there is the sorcerer tobacco (Tòbòk of fetçêra) or arbusif tobacco that is used for weaning smokers from the substance(it contains less nicotine,) and an endemic plant, Pelguêra, Jatropha curcas, whose seed are used to produce burning oil and soap. The oil yield is greater than that of rapeseed, and we can easily extract methyl esters, commonly known as biodiesel (this was my green minute!). In this landscape where every sound seems to be absorbed by the noise of the volcano, it is not uncommon to hear the singing of the beautiful Passarinha or grey-headed kingfisher. But beware… the time when you hear the bird singing could have a significant impact on the course of your day, according to folklore. If the Passarinha sings in front of your house before 12 am, expect good news. But f it sings after 12… expect bad news!

Contrast again and again… we go from black to white with a final stop… Um lugar P’ra the (Somewhere there.) A short final hop between the islands of Fogo and Maio. Here we are in Maio also one of the Sotavento islands. It is small and still unknown, tourism is slowly developing. The island was named after the date of its discovery, May 1, 1460. It is located South of Boa Vista and East of Santiago and has an area of 104 square miles. An ancient volcanic formation, the island suffered from wind and sea erosion that made it flat with vast, long sandy beaches, almost white like the Ponta das Salinas. The highest point, Maio, Monte Penoso, is situated on the East coast and rises 1,430 feet above sea level. What to do on the island of Maio? Follow the words of “La Baie des Fourmis”(Baie of Ants) by the French singers Alain Souchon and Laurent Voulzy: Watch the sea / Not envying others / Watch the sea / Let, let time go by / Let the red sails pass / the sea that moves / Over clear water / let the cares of life slip by (La baie des fourmis)… A little piece of heaven wouldn’t you say?

The island’s main town Vila do Maio was developed by the salt trade. Because the English were the primary customers, the city was also named Vila do Porto Inglês. Vila do Maio develops along one of the largest white sandy beaches of the archipelago of Cape Verde. It is characterized by its calm and colorful houses ornamented with flowers… The island has beautiful flamboyants! 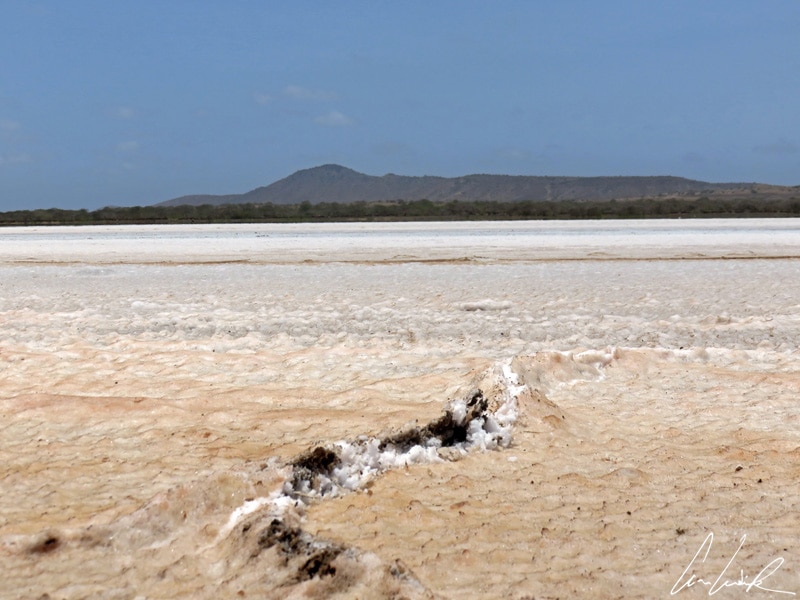 Walks along sandy beaches like Praia Preta, swimming and discovering the pleasure of diving in crystal clear turquoise waters, watching fishermen whose dogs are patiently waiting to taste the fish that will compete with the many small crabs that run on the white sands… Do not hesitate to taste the fish as we did the Moreia or Moray in many different preparations, specialties of the islands… the Garôpa or blue-spotted grouper is also a delight… Our discovery of Cape Verde on this picture postcard landscape. Time seems to stand still… just like a Sandpiper that has decided to give time to time… until sunset ! 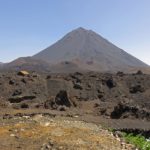 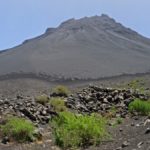 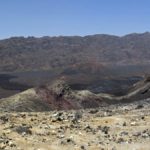 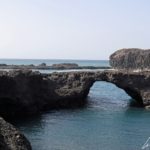 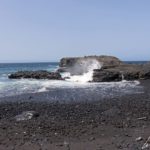 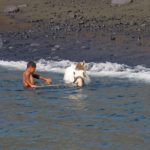 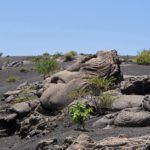 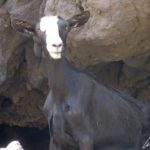 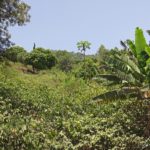 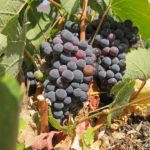 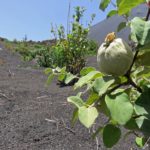 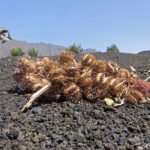 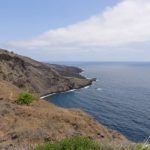 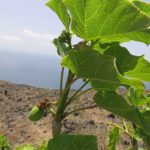 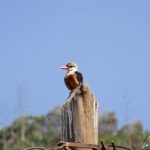 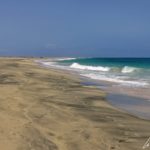 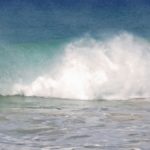 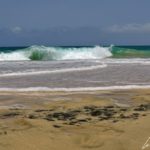 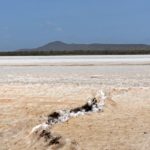 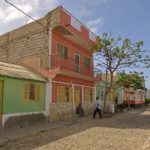 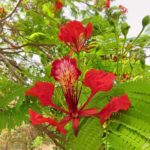 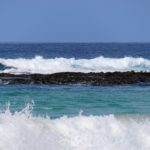 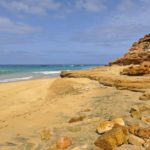 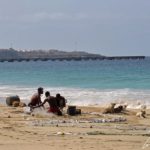 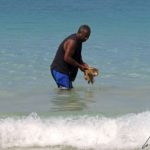 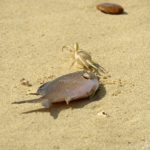 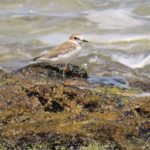 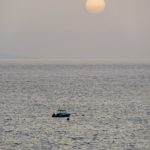 What a magical place! Cap Verde is really high on my travel bucket list! I hope I can go there soon

Cape Verde is a very exotic destination, rich in contrasts and diversity, allowing the traveler to experience several trips in one. Fogo rises sheer from the ocean to a height of 2,829 meters; a live volcano whose most recent eruption still smokes gently. Maio is a flat, desolate brown desert broken by unexpected patches of acacia forest, ringed by stunning beaches and beginning to wake up to the tourist trade…

I’m obsessed with all those pictures… absolutely stunning. What a cool adventure 🙂

Thank you 🙂 Cape Verde is a challenging place. But if you appreciate the sea, outstanding mountain landscapes with great hiking, and a convivial people with the time to strike up a mournful tune over a glass of thick red wine, then these barren lands pounded by a frothing white ocean are for you !

Wow. What an interesting place! So peaceful & relaxing

This stunning island chain has a captivating blend of mountains, beaches and peaceful seaside villages. With it’s unbelievably clear waters and breathtaking natural allures, Cape Verde should definitely be on your bucket list 🙂

I’ve never heard of this place before! Your pictures speak for itself how beautiful it is!

Cape Verde is really pretty, although it depends a lot on the island that you are planning to visit.

Beautiful place. I like places that have natural factors rather than artificial.

Every island in the archipelago boasts a distinct landscape and an individual experience. For a beach trip, head to Maio.On the other end of the spectrum is Fogo, a live volcano. Locals here live inside the crater. If you visit, you’re in for a memorable experience, whether you decide to go climbing, or head underground to explore the volcanic tunnels.

You’re perfectly right 😉 Every visit to a new island promises an entirely different holiday, so why not start your first adventure now ?

Cape Verde Definitely sounds like one interesting place to visit!!! Loved the photos!

Thank you 🙂 Every island in the archipelago boasts a distinct landscape and an individual experience.It’s a photographer’s paradise.

What a magical place! In love with all the pics, naturally so rich. Definitely, Cape Verde is one of the place I would love to visit.
XO
Shreya

In spite of its small size, this is a destination that promises diversity, with something to appeal to every kind of traveler. With it’s unbelievably breathtaking natural allures, Cape Verde should definitely be on your bucket list 😉

Such beautiful photos. I would love to plan a trip like this. Amazing

Fogo is way interesting. The north offers the fantastic volcano and the wide vineyard while the east has their green views with trees and plants, where coffee plantation will be found. South has the main town and colonial houses while the west shows how dry Africa looks like… And Maio is a beautiful desert island with lovely beaches fringed by turquoise seas 🙂