A Jurassic World: a stone forest and giant baobabs !

We are back in the morning on the unpaved road to reach the site of the Great Tsingys, 11 miles North of Bekopaka… just over an hour’s drive. The park covers 157,710 ha and is 62 miles from North to South and 6 to 25 miles from East to West. Our local guide, “Dipo,” gave us some hints and explained that it is fady (forbidden) to point to something with your index finger. Instead, bend the index finger and use the entire arm to point. We are all set for the visit: harness, lanyards, Carabiners… I forgot to warn you that a visit to the Park is a Via Ferrata! Besides “tsingy” is the Malagasy word meaning “walking on tiptoes.”

Quickly, we move through narrow canyons to the top of the famous gray, sharp-edged razor. Ladders like via Ferrata, metal ropes, and bridges mark the impressive karstic formation labyrinth. This site is one of the most extraordinary of all. The Tsingys are true cathedrals of limestone composed of a dense system of cracks, crevices, and blocks of limestone carved into blades and sharp needles. This karst stretches out of sight, a forest of peaks and spurs of rock that creates an impressive setting. Only a few green islands stick in some places in this mineral world. This massive Middle Jurassic rock rose from the seabed about 200 million years ago to create a plateau. Exposed to air for 5 million years, heavy rainfalls have eroded and sculpted the uplift into its present shape. 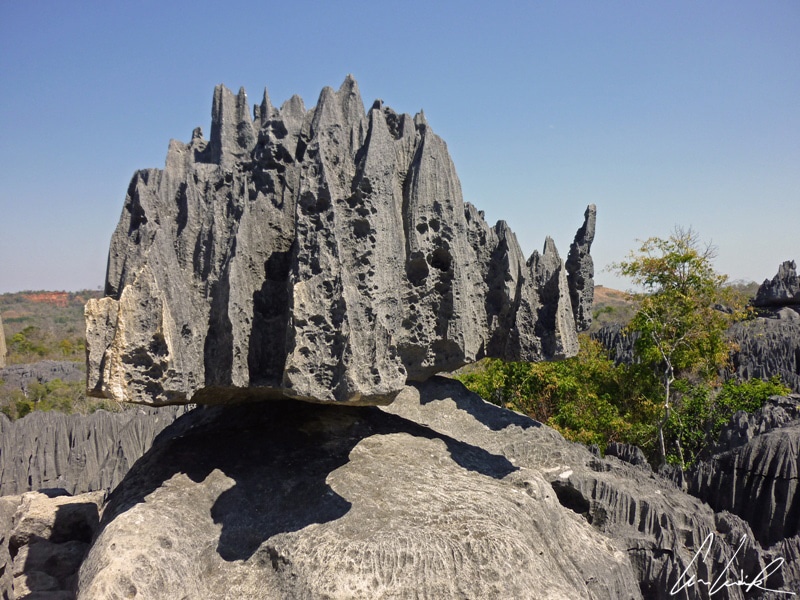 In this landscape worthy of the movie Jurassic Park, lemurs move with as much skill on the sharp stone blades as in the branches of the forest. There is no T-Rex in the mirror of our four-wheel-drive vehicle. We are in Madagascar, the kingdom of lemurs. It is in the dry forest of Antsingy that our path crosses the Lemur Sifaka (Propithecus verreauxi deckeni) – one of eleven species of lemurs in the Park – followed a few hundred yards away by a lemur Gidro (Eulemur fulvus rufus). After admiring the sunset… “The still glimmers of a day that ends,” by the Frenchman Jean Jacques Goldman Veiller tard,  Bekopaka passes into gradual darkness. Tonight we are going for a walk in search of nocturnal animals. We first come across the smallest lemur of the Big Island, the Mouse Lemur, Microcebus, a nocturnal lemur that is not larger than a mouse. The Microcebus is 11 inches long from head to tail and weighs about 30 grams. If in the night all cats are gray, however, it is quite easy to observe chameleons; they sleep hanging on tree branches of trees, and at night they abandon their “camouflage gear” and revert to their natural color… We pass several species of all colors and all sizes… absolutely amazing !

Early the following morning we leave Bekopaka, taking the sole unpaved road… no choice – we want to arrive for the sunset that sets the mythical Alley of the Baobabs on fire (in French Allée des Baobab).  Madagascar has no less than seven species of baobab while Africa has only one. The Baobab tree is known locally as renala, mother of the forest in Malagasy. On the road that leads to the famous Alley of the Baobabs, located on a dirt road  between Morondava and Belo-sur-Tsiribihina. We see other famous Baobab trees nearby. An impressive specimen, considered  sacred, stands alongside the RN 35. It is a place of worship where people come to honor ancestors by depositing shells, bottles and red and black fabrics in the crevices of its trunk. At a detour on an unpaved road, we are charmed by the loving baobab, two Adansonia za trees enlaced and growing together for centuries… It is said that loving baobabs bring luck to couples that come to them… Although ungrateful tourists mutilate their bark by sculpting a few love words. The legend does not say whether or not these magic trees can turn the luck of these undesirable tourists. Along the trail, we also cross “less famous” baobabs, but these are just as strangely shaped: the male baobab, baobab rasta, and of course the female baobab… Suddenly a thick cloud of smoke rises nearby: it is only one of the very frequent bush fires set by the Malagasy farmers who burn the bush to make pastures.

Alley of the Baobab

But it is time to get to the Alley of the Baobab; the sun is low on the horizon, a soft glowing light, smooth trunks reflect the orange rays. Baobabs become shadows accentuating their particular shape, the sun slips between these shadows and eventually disappears. The light remains magic even after the disappearance of the solar star. We took in an eyeful of this striking landscape under a generous sun ! 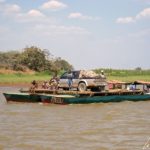 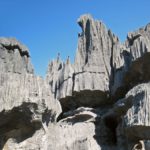 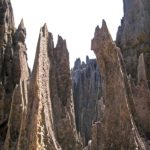 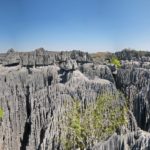 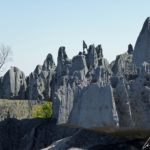 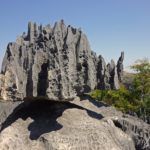 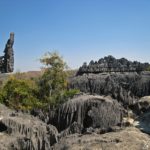 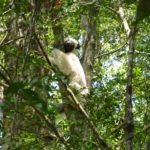 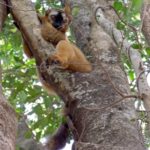 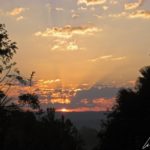 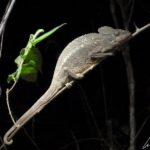 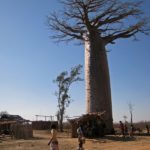 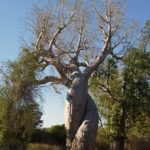 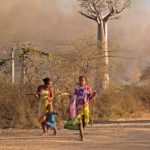 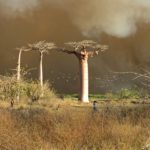 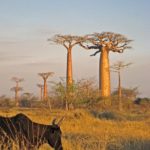 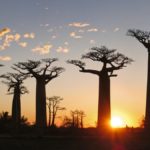 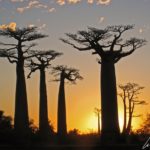 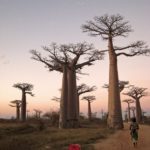 Wow, great photos! I would love to get to Madagascar one day to see the Lemurs. I would probably even put up with the long drive to see that brilliant sunset at the Alley of the Baobabs. Thank you for sharing.

The revered Avenue of the Baobabs, erupts in a medley of hulking trunks along the roadway to Belon’i Tsiribihina nearby – simply not to be missed !

Madagascar doesn’t only seem to have a unique wildlife but also unique landscapes, also recognized by the UNESCO. Your photos of the Baobab trees look pretty amazing. Very interesting and informative read.

Madagascar is unlike anywhere I have been to – fantastically beautiful, amazingly diverse for its size and still so unspoiled.

These giant baobabs look truly impressive. I haven’t had the chance to venture to Madagascar, but your article is one of those which really inspires me to plan for a trip there soon! Surely Tsingy of Bemaraha National Park will be on my bucket list then!

Thank you 🙂 The Tsingy de Bemaraha is one of Madagascar’s most curious natural treasures: a truly dramatic landscape of carved rocks and towering hoodoos, needle-like stone spires and colossal monoliths balanced tenuously atop cliffs !

Wow! This place looks amazing and its so close to me in South Africa, your pictures are amazing i cant wait to visit this part of the world.
Thank you for sharing.

It really is a destination that defies logic and herein lies its charm ! A land of colossal, bulbous baobab trees from centuries gone by, of bug-eyed lemurs and of swinging indri indris, it’s got all the elegance of a onetime French colony 😉

I had never heard of this – looks like a fantasy world!

Madagascar is a land of contrasts, of breathtaking beauty and surreal splendor !

Stunning pictures, it’s one of those places I know I’ll have to visit one day. Always been on my list but I get the impression there’s a lot more tourists visiting these days. Did you find it busy and overcrowded at all?

Madagascar is such a captivating travel destination ! Nosy Be or Tulear are very well visited beach places very accustomed to tourism… On the opposite, we were alone where we visited the Andringitra National Park & the Tsingys.

Madagascar sounds like another planet entirely! how lucky that you got to go there!

Madagascar is fascinating and beautiful country I’ve ever been to. It is a place that completely has its own vibe; it’s not African, or Asian or European but then, at the same time, it is all those things 🙂

Oh wow. I’ve seen quite a few documentaries on Madagascar, especially detailing the blocks of limestone. It’s awesome seeing pictures of something that seemed so far away.

You visit the Tsingy using walkways, bridges, ropes and climbing equipment. Everywhere around you see an endless sea of sharp, spiky rock formations that were formed by the awesome forces of the shifting sea bed so many years ago. A truly exceptional adventure experience and one not to be missed.

What a beautiful sight. This is one of those places that seem like they can only exisit in a dream! Absolutley stuning, much have been such a cool experience!

It was an amazing experience. Madagascar is such a captivating travel destination with stunning landscapes as the beautiful Tsingy de Bemaraha !