C-Ludik > Africa > Madagascar > The Andringitra, in love with trekking

The Andringitra, in love with trekking

Manao ahoana ianao ? (How are you ?) Ready to continue discovering the Big Island?

We continue our journey on the RN7 to Tana, the capital, by the RN7, passing some unusual vehicles. Isalo Park looks like the set for a western and also has an atmosphere right  out of “Gunfight at the O.K. Corral“. Indeed, near the entrance to Isalo National Park there is a small town called Ilakaka and also known as the “Sapphire Village.” In the early 1990s, the town had about 60 inhabitants, then in 1998 the world’s largest sapphire deposit was discovered nearby and after 2000 the population surged to 100,000. The landscape along the RN7 shows the results of this mining fever. A formerly quiet village was transformed into a Wild  West Town full of prospectors, whiskey, fights, and prostitutes… Trafficking and fraud are a daily reality for the region. Hundreds of kilograms of precious stones are exported illegally, theft of Madagascar’s resources… These resources are extraordinary. All kinds of precious stones, except diamonds, are found in Madagascar. Our tour guide told us that the same story is unfortunately repeated with precious wood, including rosewood, and ebony, in the North region of the Island–an ecological disaster under the guise of well-oiled and organized pillaging. It is another “dark side” of the Red Island, here blood red! 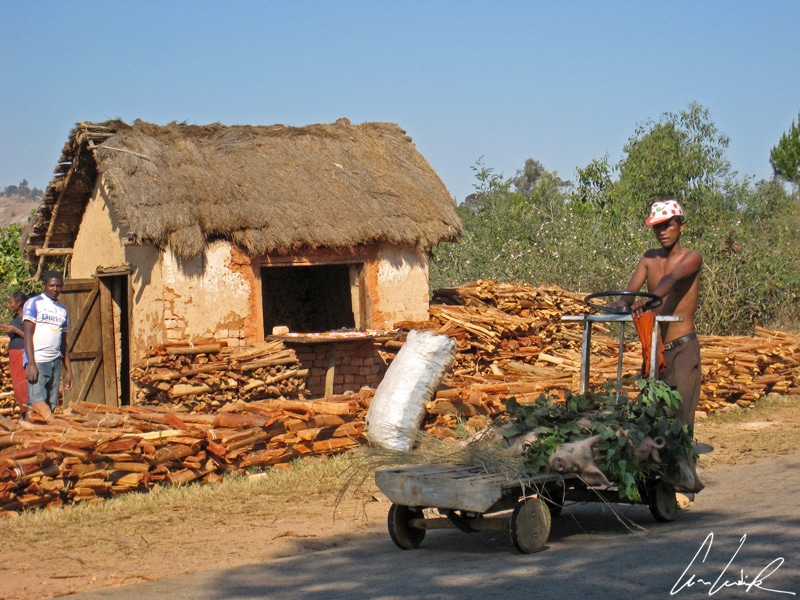 Let’s now leave cockfighting and the ring of Ilakaka behind us and revisit “Cinderella Man.” Before taking the 31-mile dirt road to the massif of Andringitra, let’s make a quick stop in Ambalavao. The village of Ambalavao is nestled in a valley surrounded by spectacular eroded granite cliffs dominated by the Andringitra massif and Pic Boby, at 8,720 feet the second highest mountain in Madagascar. A few kilometers south of the town, are three rocky spikes called the Gate to the South, Les Portes du Soleil. This is the boundary between the Highlands and Southern Madagascar. Ambalavao is also the site of the largest zebu markets in Madagascar as well as home to many handicrafts, including the renowned Antaimoro craft paper decorated with dried leaves and flowers and produced since the first Muslim immigration in the early 16th century and throughout the Island. The bark of the Avoha tree is used to produce the paper’s paste. The bark comes mainly from Fort Dauphin in the extreme Southeast of the island. The bark is first boiled for four hours and then good/bad fibers are sorted by hand. The good fibers are crushed to form a pulp used to make a ball of about one pound. The ball is then mixed with water and set in a cotton strainer on planks to dry. Before the sheets of paper are completely dry, they are decorated by hand with dried flowers and leaves according to the imagination of the craftsman or craftswomen. The sheets of paper are then left in the sun to dry for one day. Once totally dry, the paper is used for stationary, envelopes, albums or just display.

Another craft renowned in Ambalavao is the wild silk cocoon… It is also a long process to make a “simple” scarf. First collect seven moistened wild silkworm cocoons and then dry them in the sun. The cocoons are then boiled for three days, one hour with black soap, then cooled for 2 hours and then re-boiled and cooled again… At the end of this 3-day process, the cocoons are dried. The threads stand on their own, and the spinning process is done by hand (careful, don’t loose the thread!). The resultant threads are then stained with various natural dyes of plant origin, for examples black from river mud, gray from Waterlily root, ocher from cinnamon, orange from turmeric, green from passion fruit leaves. Finally, if you still follow the thread of the story, the threads are manually woven into the desired fabric. A silk scarf takes no less than three days. In short, if we count all the steps… it is a long, long, long process. It takes a lot of patience (Mora, Mora) even just to watch the “embroiderers” of Ambalavao who spend three days on one scarf. Each embroidery stitch is done with a single thread, which takes time and requires several skeins of silk. The women also practice weaving.

After these various lessons in patience, we head to the Andringitra National Park or “the field of spirits,” located in the Haute Matsiatra about 29 miles South of Ambalavao. The 29-mile trip on an unpaved road takes some time (I like to move it move it etc.). As we enter the Park, we find a new landscape characterized by high mountains, ridges, deep valleys, and hillside rice fields among granite massifs. In the rice fields, we see many red spots. These are small aquatic ferns that have a symbiotic relationship with the cyanobacterium, which release atmospheric nitrogen and rotting plants improve rice productivity. Um, um, are the Malagasy environmentalists ??

But we are not here to observe the small red ferns no matter how cute! Mountain hike lovers… Andringitra National Park is waiting for you! We start to climb the second highest mountain in  Madagascar (and the highest that can be scaled without rock-climbing) the Pic Boby or “Imarivolanitra” in Malagasy (the mountain that touches the sky) at 8,720 feet above sea level. Our “unbelievable team” for the ascent of Pic Body includes a local guide (named Fidelis) and his team of 10 porters (almost all barefoot… but all smiling)… and us! The ascent is made in 2-day of trekking. On the first day, we hike in rough terrain, majestic granite blocks in amazing colors, often covered with multi-colored lichens in surprising forms. The fauna (like the chameleon Fulcifer lateralis) and the flora constitute one of the most biodiverse and endemic places in Madagascar. Look at the plant with beautiful purple flowers, but be careful, it is used as natural explosive! And next to it is a small plant resembling blisters that is used for stomach pain. Again, a variety of Immortelle or Helychrisum mirabile… the massif of Andringitra gradually reveals its natural resources at the center of an amazing mineral environment… “A lost world” as we might imagine while reading Arthur Conan Doyle. We are struck by the beauty and serenity of the place, its geology, fauna, and flora… look on your right, the beautiful flower Pavenia !

The Massif Andringitra, a place of serenity

At the end of the first day we cross a lunar valley and move on to a plateau at about 6,700 feet. The tall grass and heather are crossed several rivers and home to birds and chameleons… just beautiful (the tour is called “Alien tour.”) We spend a cool night at 6,700 feets inside a tent and in our comfortable and cozy sleeping bags, but the rest of our team, including the local guide and porters, curl up on the rocks in their lamba next to the campfire.  They are all warmed by some—a lot?— of local rum, 70 or 80 proof! … This may seem strange or even shocking, but that is the way they live, and they seem happy.

On the second day, we depart at dawn with the first rays of sun and begin the ascent of Pic Boby. The height difference is not very significant (6,725 and  8,720 feets), but the slope is steep with high and low “steps,” a true one-leg balancing act!. The ascent takes about two or three hours. When we reach the Pic, we admire the breathtaking panorama of the entire region, including granite blocks and rice paddies. Before descending, we leave a note in the mailbox because we did not find the dog at the top. But why a dog? The Pic was named after a dog. It is said  that when the first climbers arrived at the summit, they couldn’t agree on a Christian name for it. Then they bet that the peak would take the name of the first to race to a particular point… and it was Boby, the French botanist’s dog that first crossed first the finish line… and they all exclaimed, “there’s Boby (at) the top.”

Wow – your photos are incredible. I especially love the paper making process. How much time did you spend in Madagascar? Really great, well-written post. I enjoyed it.

Boby! What a cute story! And a wounderful place!

What a great read. Sounds like you had a great time. Love the picture story to go with it.

I have been looking into visiting Madagascar for so long. Looks so beautiful and still so authentic. How is it to travel there? I mean the roads, safety, hotels, infrastructure in general? Thanks!

Madagascar sounds like such a dream trip! I bet the flights are a nightmare to get there, though. How long were you in transit?

After reading your blog I am feeling like visiting Madagascar once. I would love to know more about this place.

Nice article and feels like I have been there.

This looks incredible. I love people who travel off the beaten path. It is such a more rewarding experience. This place just looks stunning. Who knew Madagascar was a place to go trekking! You’ve now out an idea in my head 🙂

Such a different post, showcasing Madagascar! Loved the photos of silk scarf production!

Madagascar looks like complete serenity! Should add it to my bucket list immediately. Thanks for sharing! The pictures are beautiful 🙂

Three days to make one scarf? That’s incredible. Sounds like such a fascinating place, both naturally and culturally. I had no idea there was great trekking in Madagascar!

Madagascar makes me wonder about its beauty! It’s amazing to actually expereince trekking in this place! Your experience trying out and seeing those Antaimoro craft paper being done is already a treat for the eyes!

The scarf making sounds fascinating and the hiking sounds great! I love the photos too, really gets the feel of the place across.

Amazing post with some great photos keep it up!

I have no idea how interesting Madagascar is! Its amazing how much time and effort gets put into making those silk scarves! Where do they usually sell those handmade items they make?

What a lovely place. I love to trekking, and travelling as well. Thanks for the informative and interesting post.