Normandy, between “War and Peace”

Normandy is full of history in France, but also a haven of peace and relaxation at its famous seaside resorts such as Le Touquet, Cabourg, Deauville, Trouville, Fecamp, Etretat, Honfleur… It is a great natural environment for walking, cycling and horse-riding and features many local products… The Côte Fleurie stretches for about 25 miles from Cabourg to Honfleur in the east. The Côte Fleurie is eye-catching: posh, flowered seaside resorts, cozy countrysides, long sandy beaches and landscapes in gray and green… Who hasn’t heard of Deauville, well-known for its American film festival, its stars, the luxury of its palaces and the extravagance of its casinos? Located only at two hours drive or by train from Paris, the Côte Fleurie is an ideal gateway for the weekend and a landmark for Parisians on vacation…

The small maritime town of Honfleur in northwestern France is located to the east of the Côte Fleurie on the southern bank of the estuary of the Seine river. It has a rich historical, cultural and artistic heritage. The first written record of Honfleur is a reference by Richard III, Duke of Normandy, in 1027. Charles V strengthened the town’s fortifications—as well as those of the nearby port of Harfleur–to protect the estuary of the Seine from attacks by the English during the Hundred Years’ War. Honfleur is well-known for its Vieux Bassin, a picturesque harbor bordered by old, tall houses with slate-covered fronts that have been painted many times by artists including Gustave Courbet, Eugène Boudin, Claude Monet and Johan Barthold Jongkind. Together, these artists formed the “École de Honfleur,” which prepared the way for the Impressionist movement. The changing light in the sky that inspired these talented artists and so many others is particularly evident as the sun descends to the horizon. Honfleur is a bit like stepping into an old postcard. It transports you back several centuries and invites you to stroll around: cobbled alleys, half-timbered facades, tall narrow houses with protruding upper floors (some reaching seven stories, but with only two windows in front). A typical house is that of the Lieutenant of the king, the Lieutenancy building, which is also only significant remaining vestige of the fortifications built in the 18th century at the entrance of the old harbor… Another surviving section of the old ramparts of the city, the Porte de Caen, dates from the beginning of the 17th century. The Porte de Caen is surmounted by a niche containing a statue of the Virgin (Notre-Dame du Port) and flanked by two corbelled towers, each decorated with the arms of the city. 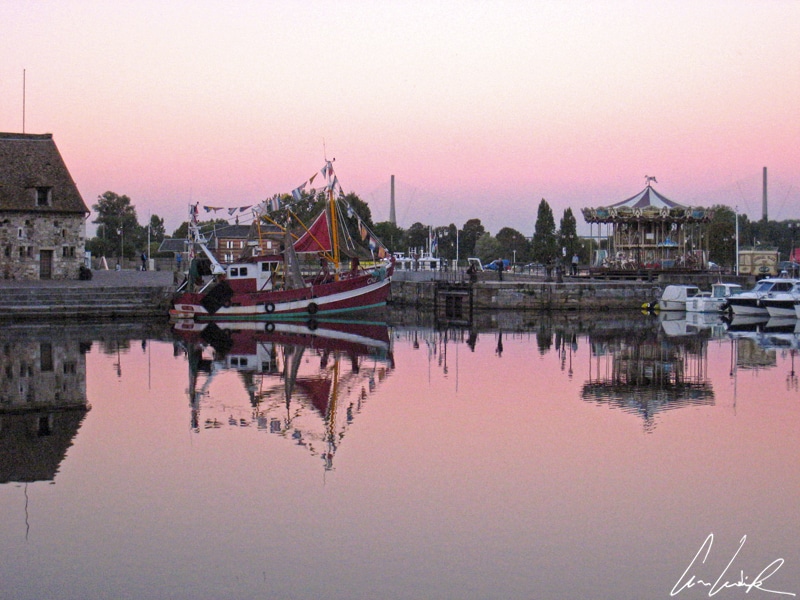 Honfleur, the changing light in the sky

The Vieux Bassin is full of history. Nowadays it is used as a fishing harbor, a trading port, and a marina. In 1608 Samuel de Champlain left from this harbor to explore the vast territory of Canada and to found Quebec City, the first Norman colony in Quebec. Less glamorous, the port was also the starting point for numerous French fleets that attacked the English coast. Among these was one in the 1450s which partially destroyed the town of Sandwich (County of Kent). On one of the quays stands Sainte-Catherine’s church, the largest wooden church in France. The first nave dates from the second half of the 15th century. The church has two particularities. First, it was built using naval construction techniques giving the impression of an upside-down ship hull, and second, the bell tower has been constructed away from the main building so that parishioners would be safe in case of fire. Finally, while strolling the streets, do not forget to sip a bowl of cider (don’t worry, you won’t get drunk) taste a Norman tart made with apples and cream, and drink some Calvados of course… some of the simple and enjoyable pleasures that old Honfleur offers. Don’t hesitate if you are offered a taste of teurgoule, a Norman specialty par excellence. This dessert consists of rice cooked in whole milk, sweetened with sugar, and flavored with cinnamon. It is baked in a dish at a low temperature for several hours. According to historical manuscripts, teurgoule originated in Honfleur, and according to popular memory, the inventor of the dessert was François Orceau de Fontette (1718-1794) who imported rice and spices into Normandy to avoid a shortage in the Pays d’Auge and to end the threat of a popular uprising. As for the origin of the name it came from the Norman language and means “twist the ghoul, the face.” Several explanations for this name exist, but I have a weakness for the following: eaten while hot, the teurgoule makes your face twist or perhaps that the taste of cinnamon, a spice new at the time, causes a grimace or “twists the ghoul” of the Norman ? 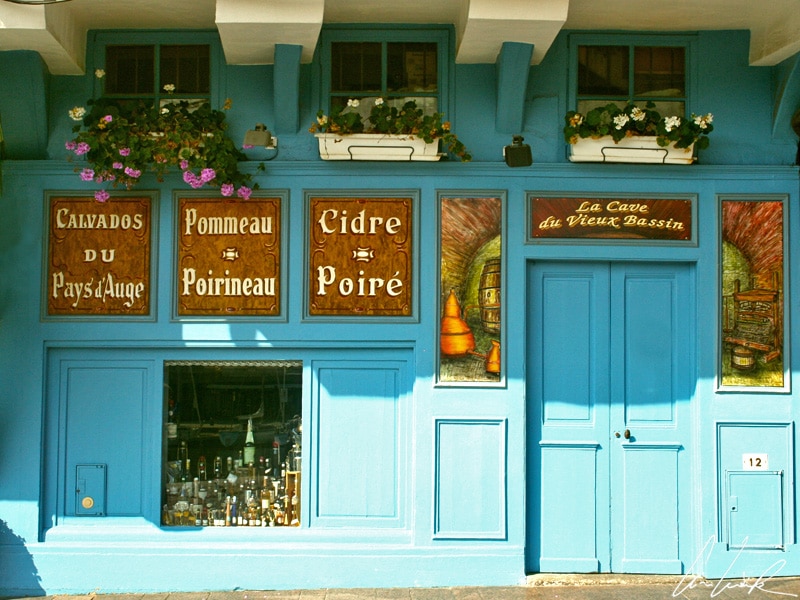 A bowl of cider ?

The Normandy Bridge, a cable-stayed road bridge officially inaugurated in January 1995 (after seven years of work), spans the river Seine joining Haute and Basse (high and low) Normandie. It is 7,032 feet in length—as long as the Champs Elysées–and connects Honfleur to Le Havre. “Atmosphere, atmosphere” as the French actress and singer Arletty would say. Everything is a matter of atmosphere, and here the bridge emphasizes the impressive structure of concrete and metal. On a stormy day, when the sun only briefly breaks through the low clouds, the two 705-foot tall concrete pylons appear as upside-down Ys like two giants rooted in the ground and watching the ocean. The Freyssinet cables (composed of 31 to 53 strands of steel) look like thin strings from a distance and resemble the ropes used to hoist the mainsail of a ship… Crossing the bridge, we find ourselves “on the other side of the water”… “To the advantage” (Goodbye) to the Côte Fleurie and “Boujou” (hello) to the Côte d’Albâtre… 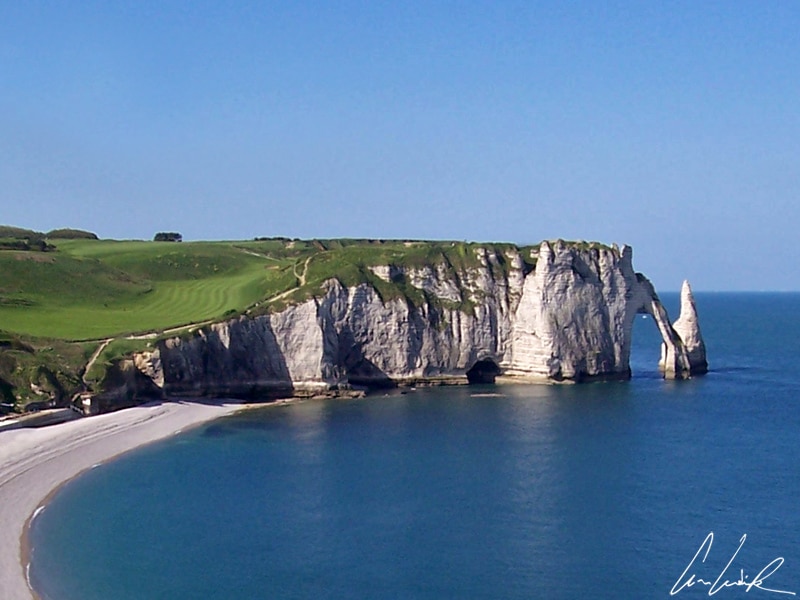 Moving on to the city of Le Havre, we discover, little by little, the gray stone-like color of the sky, the bright blue of the ocean and the milky white hue of the chalk cliffs of the Côte d’Albâtre (Alabaster Coast), the 87-mile-long sequence chalk cliffs extending from the estuary of the Seine to the river Somme. The Normandy cliffs seem to be snatching themselves up from the fury of the waves of the English Channel waves -indestructible ramparts facing the ocean, which attacks them with blows of salt and furious surf crashing onto the pebble beach. In this endless struggle, the ocean gains a little every day by patiently eating away caves, piercing high arches, and carving out isolated rocks. Etretat located about 20 miles northeast of Le Havre, is a cliff immortalized by the French writer Maurice Leblanc in his novel “The Hollow Needle” published in 1909 and most recently featured in the 2014 film Lucy, directed by Luc Besson. Etretat is undoubtedly the most famous stretch of chalk cliffs along the Côte d’Albâtre. The sheer chalk cliff is pierced by massive arches and a lone needle rock. The Hollow needle of Etretat, the white towers of the Abbey Notre-Dame de Jumièges, the old lighthouse of Tancarville, the sunken islands of the Seine… all mysterious places whose enigmas are unveiled by the fictional gentleman thief and master of disguise, Arsène Lupin ! Now we face the legendary cliff, Porte d’Aval with its seductive silhouette inspiring to so many artists including Claude Monet, Gustave Courbetou, and writers such as Maurice Leblanc and more recently Michel Bussi. Guy de Maupassant, who spent most of his childhood in Etretat, described the Porte d’Amont as “an elephant dipping its trunk into the sea”. With some imagination, it looks like that… As for Victor Hugo, he described the Porte d’Aval in “Une Lettre d’amour à Adèle”, as “Ce que j’ai vu à Etretat est admirable. La falaise est percée de distance en distance de grandes arches naturelles sous lesquelles la mer vient battre dans les marées. J’ai attendu que la marrée fut basse, et, à travers les goëmons, les flaques d’eau, les algues glissantes et les gros galets couverts d’herbes peignées par les flots qui sont comme des crânes avec des chevelures vertes, je suis arrivé jusqu’à la grande arche, que j’ai dessinée” (What I saw in Etretat is admirable. The cliff is pierced in some points by great natural arches under which the sea comes to crash at high tides. I waited till low tide, and through the goemons, puddles of water, slippery algae, and large pebbles covered with grasses combed by the waves which are like skulls with green hair, I arrived at the great ark, which I have drawn.) It is true that the impressive arch of Aval (about 263 feet high), sculpted by Mother Nature, offers a breathtaking panorama. And how can you not to succumb to the charm of the mysterious solitary needle rock standing 230 feet offshore and rising 167 feet into the sky ? Is it really hollow and does this hollow needle shelter the Treasure of the Kings of France as discovered by Arsène Lupine? It’s up to you…

Discover my others articles about France 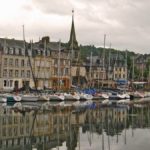 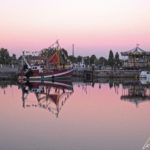 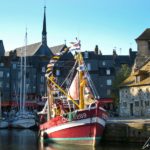 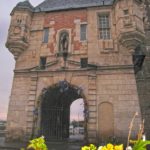 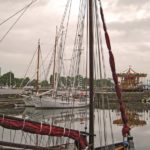 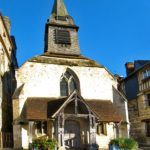 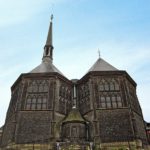 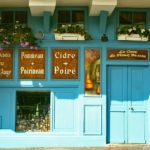 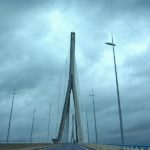 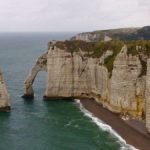 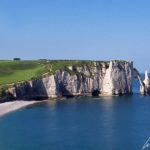 wow! it looks so beautiful here… it truly is picture perfect!

My first trip overseas was a school trip to Normandy at age 16. I stayed with a host family and visited Honfleur, Deauville, and Etretat, among other Normandy sites. So lovely to see them here — and your photos are beautiful. Thank you for bringing back great memories

Beautiful post. Loved the way you described, I also want to go next year 🙂 Thanks for sharing

This is such a great post! So much info and I love your pictures!

Your photos are great, especially the flat, calm water. You gave us a lot of history!

Many great facts about the area and lovely photos. It is on my list!

I’ve never been here! I never really knew if it would be a place I’d like to visit, but you described it so beautifully and I love the photos! It’s definitely on my list now!

I haven’t seen a blog that looks so stunning and your informative post makes it such a great experience! The pictures are breathtaking!

You had me at Norman tart made with apples and cream! How delicious, I have such a sweet tooth and this sounds incredible! I’ve never been to Normandy but now I want too 🙂

Lovely post about what looks like a great destination. It sounds like there’s a lot of history to soak up. And I love the needle rock shot, very picturesque.

Your pictures are so beautiful. I’ve been to most of these cities and towns when I was younger on school trips. I would like to go back again and visit, specially Honfleur. Thanks for sharing