Lapland: Northern lights like you’ve never seen them before!

Lapland offers an unparalleled spectacle during the Northern Lights season. Between fjords, tundra, steep cliffs and steep coasts, the region is known for its spectacular aurora borealis.

What are the Northern Lights ?

After touring Tromsø we turn to the beautiful spectacle of the Northern Lights, the Aurora Borealis, and move away from the city and its light pollution. The precise place of observation remains unknown for the moment… the weather conditions will lead us to the best observation sites. Indeed to observe this magical fairy, the sky must be clear, with little or no clouds. 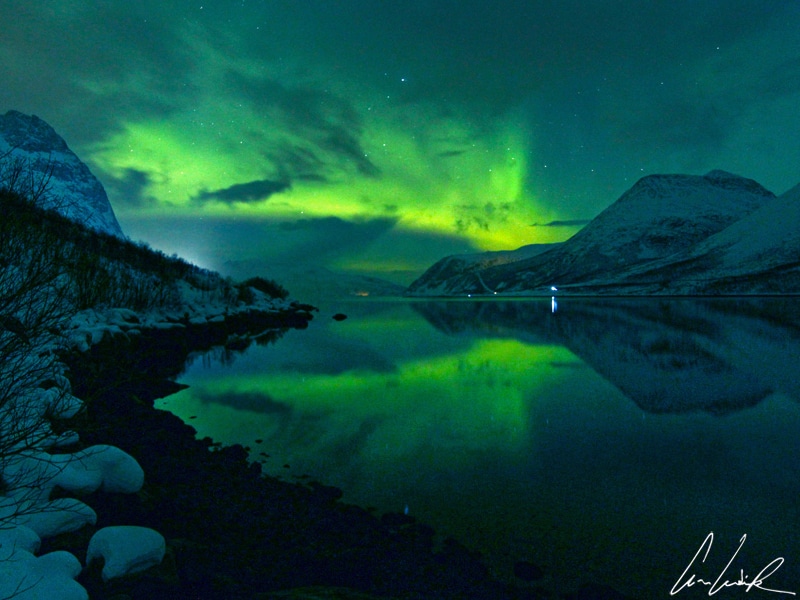 Like me, you may ask yourself what is the origin of the Aurora Borealis ? Although their manifestation seems pure magic – the Firefox moving fast over the Arctic mountains and stirring up the snow with his tail so that sparks to fly into the night sky – there should also be a scientific explanation. The lights are a natural phenomenon that occurs around the magnetic poles of the northern and southern hemisphere. Aurora Borealis or Northern Lights in the northern hemisphere and Auroras Australis or Southern Lights in the southern hemisphere. This incredible phenomenon is caused by electrically charged particles released by the sun that enter the Earth’s atmosphere and collide with atmospheric gases. The particles are released by solar explosions or solar flares–masses of gas charged with protons and electrons–which are then carried by solar wind 93 million miles to Earth. Because the Earth’s magnetic field is weaker at the poles, some particles enter the Earth’s atmosphere and collide with atoms and molecules of oxygen, nitrogen, hydrogen and other elements and become ionized. The ionization caused by these collisions produces the photons (particles of light) and thus gives birth to the Northern Lights. Each Aurora Borealis is different and can last from a few moments to several hours. Auroras can appear in many vivid colors, including green, red, blue, pink, purple, and yellow. The color depends on the gas particles as well as their density. Green is the most frequent color. Green Auroras are produced by oxygen molecules located about 60 miles above the Earth. The red Auroras are produced by higher altitude oxygen 200 miles above the Earth. Blue and purple Auroras are produced by nitrogen.

« The Northern Lights were born on the great ice floe over there to the east behind the mountains that close the entrance to the fjord. They grew across the sky, in ribbons and bangs, to the frozen desert over there to the west, beyond Nartidok. Alive like a cloth, alive like a flesh, the aurora borealis is the soul, the heart of the night. It beats, it quivers, it suffers, it cries, it laughs. Sometimes it sleeps, inert, and suddenly it wakes up, and its cheeks turn to pink. »
(Paul-Emile Victor – Boréal, 1938)

After this scientific lecture, let’s go back to our “Aurores hunt”… We are ready to go out, wearing superimposed thermal layers to face the harsh polar conditions of the Lapland! The search for the Northern Lights may take several hours and bring excitement and ecstasy, but often with little physical movement. It is important to stay warm in the cold, dark Arctic night.

How to see the Northern Lights ?

The Aurora phenomenon gives rise to legends. The Sámi give different names to the Aurora Borealis, among them Guovssahas, which means “the light which can be heard”, even if no scientist has ever produced a sound recording… The sound of the Aurora Borealis is not captured, only the show. Where to observe the Northern Lights in Lapland? Contrary to what one might think, the Northern Lights are very difficult to discern at first glance, especially for an untrained eye… The activity of an Aurora Borealis starts very discreetly and is often not visible to the naked eye. The proverb “All cats are gray in the dark” is true: at nightfall, our vision is not the same as in the daytime, and we tend to confuse colors which are distinct in daylight. So, if you see an arch or a band of white in the sky, it may be the beginning of an Aurora Borealis ! To confirm your perception, focus your camera on this “white trail”, and take a picture in a long exposure. This is a reliable technique because the sensor of the camera is more sensitive than the human eye, and the sensor can recognize the first hints of the celestial painting before it is noticeable to the naked eye. If the “white trail” appears green in the picture, it means that the dazzling phenomenon will soon begin.

In the dark sky is etched by green wisps of lights between the clouds which glide above the snow-covered mountains, as if to warn us that the show is about to begin. A dazzling display of lights adorns the sky, a bit like a curtain flapping in front of an open window… Suddenly, without warning, the sky presents a magical choreography. It looks like a fluorescent curtain falling from the sky, which fades into the darkness of the night. Then, as soon as the lights end and the sky had cleared up, a thick layer of threatening clouds reappears. Here, the show is already over, but our Northern Lights hunt just starting. We decide to change location, to go elsewhere to see if the universe is still in an artistic mood. We return to the beautiful Ersfjord because Auroras align with the fjord… You have to be patient! You are at the mercy of Mother Nature… The strong wind blows the clouds away, and we have a new spectacle that is reflected in the water. An ethereal vision, atmospheric “X-Files,” the show is breathtaking, even Fox Mulder or Dana Scully could not divert my attention from this cosmic ballet. Change of location again… watching the sky and still… A luminous snake begins to take shape over the bay, and immediately, the magic begins again

Fairy curtains of brightly colored lights dance for us in the sky to the rhythm of silent music. Auroras metamorphose little by little into a shimmering green arch over the earth from one end of the bay to the other. The Northern Lights illuminate the sky, dance lightly above our heads, full of magic and the mysteries of another world… Ainsi font, font, font / Trois p’tits tours et puis s’en vont… (That’s how they go, go, go, three laps around and they leave) that means that they do their show and go, almost as quickly as they appeared. Thank you, Mother Nature for the show ! 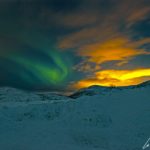 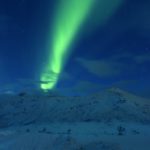 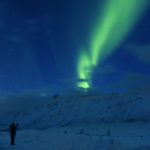 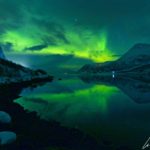 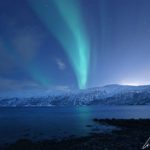 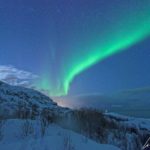 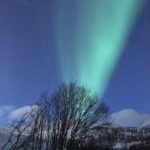 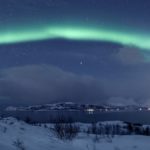