The state of Maine, « Vacation Land »  as it calls itself on vehicle license plates, is covered by vast forests and dotted with more than 6,000 lakes. It is the northernmost state in the northeastern of the United States and one of six states composing the « New England » region. Maine provides 90% of the U.S. lobster production. You’ll find lobster grilled, steamed, or au gratin, in court-bouillon, sandwiches and salads, and even in ice cream… if you dare ! For dessert, however, we prefer wild blueberries, another local specialty. Maine produces 99% of the wild blueberries in the United States. Try a local cocktail, the Blueberry Daiquiri. In addition to gastronomic interest, Maine is also known for its natural diversity: jagged rocky coastline, sparkling ponds, crystal-clear lakes, rocky beaches, and the opportunity to see many wild animals. On the Atlantic coast, Acadia National Park is one of the most beautiful natural areas on the North East American continent.

Acadia National Park is one of the oldest national parks and the only national park in the northeastern United States. The Park is about a three-hour drive from Boston and five hours from Quebec City. The area was once the fishing and hunting site of the Abenaki (or Wabanaki) Native American people. The name Abenaki comes from the terms « waban » (dawn) and « Aki » (land), meaning “people of the rising sun” or “people of the land of the dawn” in the Eastern Algonquian language. In the early 17th century, French settlers discovered the area, and during his exploration of the French province of Acadia in 1604 Samuel de Champlain gave the « l’île des Monts Déserts » (Mount Desert Island) ) its name. The park is the meeting point between the ocean and the glacial mountains. It includes Mount Desert Island, adjacent small islands off the Atlantic coast, and the Schoodic Peninsula on the coast of Maine. President Woodrow Wilson created the Park on July 8, 1916, under the name « Sieur de Monts National Monument » in honor of Pierre Dugua de Mons or Du Guast, Sieur de Monts, founder of Acadia and Canada. Congress renamed the Park three years later on February 26, 1919, as « Lafayette National Park » after the Marquis de Lafayette, a French supporter of and influential participant in the American Revolution. Congress changed the name of the Park again on January 19, 1929, to Acadia National Park in honor of the former French colony of Acadia. Ocean, beaches, mountains, and immense forests dotted with lakes and prairies make this national Park pure pleasure for the eyes.

« As long as I live, I’ll hear waterfalls, and birds and the wind singing. I’ll interpret the rocks, learn the language of flood, storm, and avalanche. I’ll acquaint myself with the glaciers and wild gardens, and get as near the heart of the world as I can ».
(John Muir – A Summer in the Sierra)

Acadia National Park is one of the smallest American national parks, yet it is among the 10 most popular. In addition to Mount Desert Island (47.2 sq. mi), the Park includes the Isle au Haut (4.5 sq. mi), and small islands southwest of Mount Desert Island (0.3 sq. mi.) To the east, on the mainland, the Schoodic Peninsula (3.7 sq. mi.) – south of Winter Harbor – is also included in the Park. The total area is 55.7 sq. mi, all managed by the National Park Service.

Beginning in the mid-1800s, the wealthy Rockefeller, Morgan, Ford, and Vanderbilt families spent their summers on Mount Desert Island. The Second World War and a large fire put an end to this custom, but the charm of New England and the shadow of philanthropist John D. Rockefeller Jr. still hover over the Park. This is due mainly to the famous « carriage roads », a 57-mile network of woodland roads for horse-drawn carriages financed by John D. Rockefeller Jr. between 1913 and 1940. It is easy to imagine ladies in elegant hats and moustachioed gentlemen in suits riding in horse-drawn carriages along roads protected by tall conifers. If you don’t like cycling or walking but are fond of old-fashioned customs you can also rent horses or carriages. You will love these roads winding through trees and passing, from time to time, over one of the 17 granite-covered reinforced concrete bridges that line the route. The roads wind their way through hillsides and lush valley bottoms, and offer the occasional ocean view and glimpses of tiny harbors that are home to lobster flotillas. Stops can be made to explore the many lakes such as Eagle Lake, the largest freshwater lakes in the Park. It covers an area of 436 acres and has a maximum depth of 110 feet and an average depth of 50 feet. It was initially called Great Pond or Young’s Pond, but was renamed Eagle Lake by landscape painter Frederic Edwin Church in the mid-1800s. His painting « Eagle Lake Viewed from Cadillac Mountain » is a beautiful depiction of the site. If you feel inspired, you can walk or ride your bike around the lake on a 6.1-mile section of the carriage road.

The 27-mile long Park Loop Road allows you to discover most of the Park and its different panoramas, the coast, forests, and mountains, by car. It connects all the Park’s highlights, allowing a quick and effortless visit to various viewpoints! But of course, only by hiking do you genuinely immerse yourself in the magic of the place. The Park has a network of more than 120 miles of mesmerizing hiking trails zigzagging along the coast and inland.

The summit of Cadillac Mountain, 1,529 feet above sea level, overlooks Acadia National Park. Originally called Green Mountain, it was renamed Cadillac Mountain in 1918 after the French explorer Antoine de la Mothe Cadillac. It is the highest mountain on the Atlantic shoreline of the United States. A rack railway, the Green Mountain Railway Company, was built for tourists in the 1880s. The train connects the shore of Eagle Lake to the summit of the then Green Mountain. Daring speculators, wanting to take advantage of the growing numbers of visitors, brought this curious attraction to life and allowed thousands of people to marvel at the panorama of Mount Desert Island. Unfortunately, its existence was relatively brief; its activity ceased in 1895. In 1931, a scenic Summit road opened. The 3.5-mile paved road meanders along the northern and eastern sides of Cadillac Mountain before reaching the summit. From the summit, there is a 360° view of mountains, the ocean, and the islands. It is particularly magical at dawn when the sun rises over Frenchman Bay.

Mont Cadillac is said to be, by virtue of its altitude and easterly position, the first place in the United States to see the sunrise. This, however, is only true for the six months from October through March. The rest of the year the angle of the earth allows the first rays of sunlight to fall on coastal cities to the north. Whether to catch the sunrise or not, the scenery and the superb view of the surroundings are worth an early start, even though just before dawn the drive up to Mount Cadillac can feel like rush hour ! Tourists, fearless hikers and photographers who are not afraid to wake up at 4 am can enjoy the great ritual of the Earth waking up above Frenchman Bay with a view of the Porcupine Islands in the distance: a sunrise in a landscape at the end of the world !

« Abigail awoke before dawn, and drove out to Cadillac Mountain and up the twisting access road to its pink granite summit. She jumped out of her car, the wind brisk at almost sixteen hundred feet, the sky awash in the lavenders, pinks, and oranges of the Maine sunrise. Below her, ocean bay and islands came into view, and she could hear murmurs of pleasure from other early risers ».
(Carla Neggers – The Widow)

Eroded granite ridges, U-shaped valleys, deep, narrow lakes, and ocean bays… The panorama from Mount Cadillac tells the geological story of the region, a landscape sculpted by glaciers. The islands you see in the distance are made of stronger rocks; the softer rocks around them have eroded. Mount Cadillac is the largest granitic outcropping on Mount Desert Island. This 400 million-year-old mass off pink granite has been altered by several waves of glaciers, causing the rock to fracture and form rectangular or square blocks.

The state of Maine is well-known for its lobsters, but also famed for its spectacular 65 operational lighthouses, which give the state the nickname of « Lighthouse State ». Maine lighthouses have stood for over two centuries along Maine’s rocky coastline and islets. Their lights guide and protect seafarers and vessels. The charm of these impressive buildings is difficult to resist. When they were built they stood facing the onslaught of the waves and guiding the brave ships facing the elements and carrying whale oil! Now the age of the whalers and Moby Dick is over, but these imposing citadels still have some charm and are very photogenic ! One of the most visited and photographed for its historical past is probably Portland Head Light on the south side of Portland harbor entrance on Cape Elizabeth. Portland Head Light was the first lighthouse commissioned by George Washington in 1791, and is still working today. Perhaps you think that Maine has the honor of having the most active lighthouses, but the state of Michigan takes the prize because of the maritime traffic on The Great Lakes.

At the southwestern end of Acadia National Park, Highway 102 runs through the village of Bass Harbor. Should we continue even further south on 102A just to see how far the road takes us ? Perhaps as far as Bass Harbor Head Lighthouse which has a reputation as the most photographed spot in Acadia National Park, if not New England. Bass Harbor Head lighthouse is breathtaking, sitting perched on the rocks above Acadia’s dramatic coastline near the town of Temont, nicknamed « the quiet side ». It is the only lighthouse on Mount Desert Island. The 26-foot white cylindrical tower was built in 1858. The black lantern at its top emits a red light visible for 13 nautical miles (about 15 miles). The lighthouse is still operational and manned by the Coast Guard. We can stroll the property freely, but the lighthouse itself is closed to the public.

The Ship Harbor nature trail provides access to the lighthouse. It is a 1.3 miles roundtrip offering beautiful coastline views. One crawls over the rocks and passes through spray from the sea. The ocean, the sound of the undertow, the water holes in the rocks filled with marine life, the sailboats passing in the distance… this place is just restful and authentic. 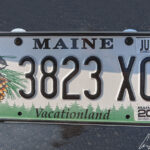 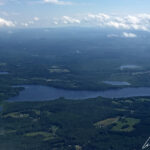 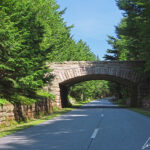 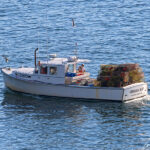 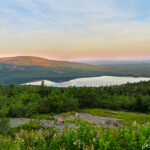 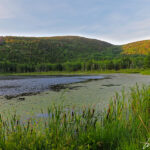 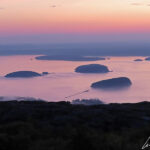 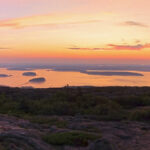 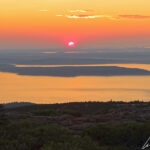 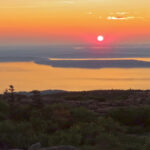 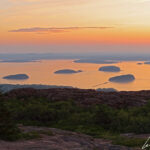 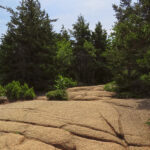 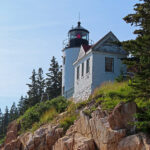 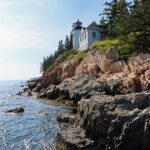 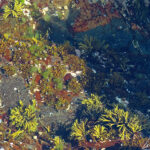 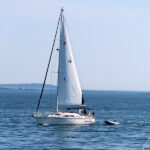