Acadia National Park: A Park where the Mountains meet the Sea

National parks are much more than preserved wilderness. They have the power to stimulate our senses and make us feel alive. Their beauty offers an escape from the hustle and bustle of the world and the opportunity to experience extraordinary moments. As John Muir, the pioneer wilderness preservationist wrote, « Who has not felt the urge to throw a loaf of bread and a pound of tea in an old sack and jump over the back fence ». Just grab our old backpack, put on our hiking boots, and jump exploring the Acadia National Park on the Atlantic coast of Maine. The Acadia National Park is where the sea meets the mountains, where the beauty of the North East American coastline meets with rugged, rocky landscapes and vast forests. In this wild and unspoiled expanse, visitors will enjoy wave-beaten beaches, spectacular rocky shores, coastal mountains, islands, peaceful lakes, and the whims of Atlantic winds…

Ocean path: a trail where the Mountain meet the Sea…

« Ocean path » is probably the most popular scenic walking trail in the Acadia National Park. The trail starts at the far end of the upper parking lot at Sand Beach and then meanders along the eastern shore of Mount Desert Island for about two miles to reach Otter Cliff. Set foot on this trail and breathe in the ocean air under the tall trees. All you can hear is the relaxing sound of ocean waves breaking on the rocks below. This hiking trail lets you discover the beautiful coastline with its jagged pink granite formations resisting the relentless onslaught of the ocean. Sand Beach is composed mainly of sand, pieces of shells, and other marine parts such as broken mussels and sea urchins. Only the most daring will go swimming in the icy waters, which, even in late summer, rarely exceed 55°F (about 13°C.) The climate here is subject to maritime influence: temperatures are lower than inland, and rainfall is more abundant. In winter, snowstorms are frequent even mid-spring; fog can occur at any time of the year !

«…There the sound of the waves and the agitation of the water laid my senses to rest, chasing all other agitations from my soul and plunging me into a delicious reverie, and the night often surprised me, coming without notice »
(Jean-Jacques Rousseau – Reveries of the Solitary Walker)

Along the coast, the Atlantic headlands are under the never-ending assault by wind and waves. The scream of the gulls punctuates the sound of waves. The aroma of the iodized air, the sight of the big blue sea, and a few dolphins swimming in the distance accompany us on this hike along the coast. Over centuries, this coastline has been continually sculpted by the ocean: large granite rocks tumble down, transforming many creeks into beautiful pebble beaches. The granite formations rise spectacularly above the water, like stone colossuses guarding the ocean. Sometimes these piles of stone delicately balanced as if nature were engaged in « stone stacking »  or « rock balancing » as popularized by the artists Michael Grab and Bill Dan. We’re new to stone balancing, so we just made a cairn on the beach…

The beaches, barely sheltered by rocky headlands, are made of large pebbles rolled and rounded by the waves. This is the case of the unofficially-named Boulder Beach, which is covered with thousands of sea-battered bowling ball-sized rocks. From Boulder Beach, you can see Otter cliff where granite formations rise dramatically above the water and are very popular with climbers. Past Otter cliffside, the trail meanders through a coniferous forest bordering the ocean. Along the way, we meet many interesting people: a grey squirrel enjoying a meal, a female red-winged blackbird (Agelaius phoeniceus), or a monarch butterfly (Danaus plexippus) hunting for food. The monarch butterfly’s wings feature a recognizable bright orange with black veins in the center and black borders with small white dots at the edge. Did you know that the monarch’s color says to predators: « Beware, don’t eat me, I’m poisonous ! ». The monarch butterfly gets its toxin from milkweed. The eggs and caterpillars of the monarch develop on the plant, which is their only source of food. The toxic latex from the milkweed gives the monarch its bad taste and discourages birds from eating it. But the most amazing thing about these monarch butterflies is that they are international travelers. Every autumn, as the cold weather approaches, millions leave Canada and the northern United States to spend the winter in Mexico, more than 2,000 miles away ! In the spring, their offspring return to the north.

Acadia Park from the inside: Jordan Pond and the Bubble Mountains

Inland, away from the cliffs and the dance of breaking waves, Acadia National Park shows its peaceful and bucolic side – a real haven of peace with immense forests, rivers and glistening lakes ! We can observe the traces of the Ice Age in U-shaped valleys where long lakes stretch and from which rounded mountains rise.

« JI am like an ocean transformed into a lake, nostalgic for its tides, waves, and storms ».
(Geneviève Dormann, French writer and journalist)

Situated near Northeast Harbor, Jordan Pond is a magnificent glacier-formed lake from the Ice Age. The view of Jordan Pond with the Bubble Mountains in the background reflecting in the surface of the Pond is breath taking. The Bubble Mountains are one of the icons of the park. The water of Jordan Pond is exceptionally clear, with an average visibility of 46 feet. Although this crystal water may be inviting, wading or swimming is not allowed as the Pond is the public water supply for Seal Harbor. As an alternative, you can visit « Petite Plaisance », home of the French novelist and member of the French Academy Marguerite Yourcenar, whose shadow lies over the area. She wrote Memoirs of Hadrian (1951) among many other distinguished works. Jordan pond can be reached via the Park Loop Road.

The dense forests that grow along the shores of Jordan Pond invite the visitor to take a stroll. The forest is home to an abundance of flora such as this Spiraea. More than 500 species of plants abound in the park, such as the Arctic rose or the Iris versicolor. A very easy 3.6 mile-loop runs around the lake. On the north side, the trail includes wooden bridges over two large creeks that flow into the lake. This is where you may get a chance to spot the common loon, also known as the great northern diver (Gavia immer.) The size of a goose, this bird is easily recognizable. The upper parts are blackish, and each feather has small white spots on it like a checkerboard. It has a black dagger-like bill evenly tapered that it uses to stab fish when diving. As its name, « diver », suggests this bird catches fishes underwater by diving as deep as 200 feet. Fish account for about 80% of its diet. The Common loon is also able to remain in apnea for three minutes. It is an aquatic bird that needs a lot of space, twenty to eighty hectares to be comfortable. That’s why there are usually only a handful of couples on a large lake. In addition to the common loon, the park is also the preferred refuge for more than 350 species of listed birds. Look out for the Downy Woodpecker (Dryobates pubescens,) Bald Eagle (Haliaeetus leucocephalus)and the Black-capped Chickadee (Poecile atricapillus), the state bird of Maine.

Consider taking the trail to the top of South Bubble for a hike a bit spicier than that around Jordan Pond. Your path may cross that of one of the 40 species of wildlife that inhabit the park: squirrel (grey and red), chipmunk, white-tailed deer (Odocoileus virginianus,) beaver, muskrat (Ondatra zibethicus,) North American porcupine (Erethizon dorsatum,) coyote (Canis latrans,) bobcat (Lynx,) fox, black bear (Ursus americanus,) to name a few. In the past, cougars (Puma concolor) and grey wolves (Canis lupus) could have been encountered. These latter predators, however, have entirely disappeared from the region.

Even if no animals cross your path, the reward at the end of the road is a stunning view of the lakes from the top of South Bubble Mountain, which rises to 766 feet above sea level. North Bubble has a higher elevation, 872 feet. South Bubble has another winning card up its Ice Age sleeve: Bubble Rock, aka Balanced Rock. This boulder, transported by glaciers and deposited in a precarious position at the edge of a cliff… seems to be on the verge of breaking away and hurtling down the mountainside. But have no fear: it has been in this position for several thousand years, but who knows !

After this ascent and all the excitement (will it fall or not ?), treat yourself to traditional tea-and-popovers at the Jordan Pond Restaurant. What, you don’t know about popovers? Don’t worry, neither did I before tasting this close relative of Yorkshire Pudding! It’s a light bun, hollow on the inside like puff pastry and crispy and golden brown on the outside. Eat them without moderation just out of the oven and topped with blueberry jam (I remind you that we are in the State of Maine). 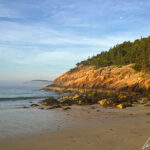 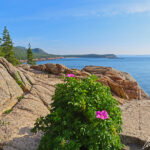 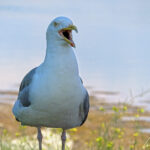 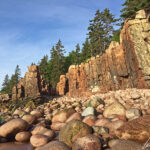 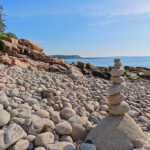 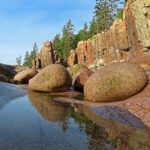 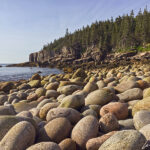 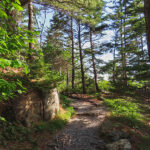 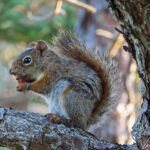 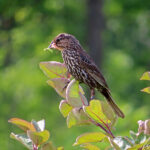 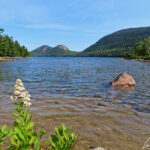 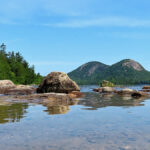 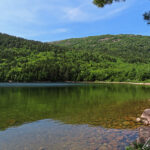 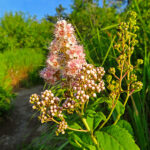 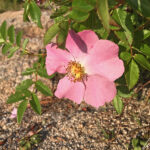 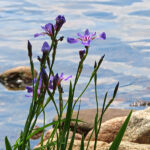 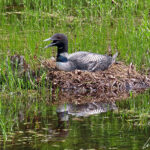 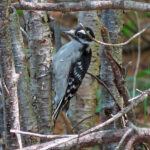 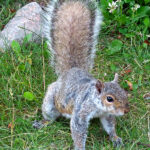 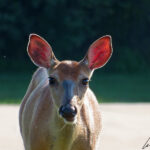 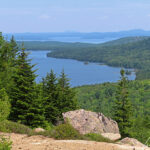 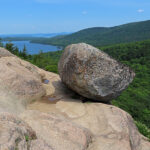