The Streets of San Francisco

San Francisco in Northern California, commonly abbreviated SF or more colloquially Frisco, is one of the most beautiful cities on the West Coast of the United States. Go, relax, close your eyes and imagine yourself for ten minutes at the wheel of a Ford Mustang Fastback…Or rather for exactly 10 minutes and 53 seconds, the length of the car chase in the 1968 movie Bullitt through the hilly streets of San Francisco with Steve McQueen at the wheel of a 1968 Ford Mustang Fastback. The scene starts at Fisherman’s Wharf, where you can laze in the sun like the many sea lions while taking deep breaths of the sea air and watching the maneuvers of fishing boats entering or leaving the harbor. Fisherman’s Wharf, originally a fishing pier and market, is today the most famous tourist attraction in San Francisco. The area features many seafood restaurants, including Bubba Gump (Run Forrest run !), shopping centers such as Pier 39, which was built with the materials from several abandoned docks, and gift and craft stores.

Our route crosses the historic streetcar line F. Starting on Market Street, the line connects Fisherman’s Warf to Castro via Embarcadero, a street along the water. The streetcars come from all over the United States—from San Francisco, Los Angeles, New York, Chicago, Kansas City, Cincinnati, Louisville, Boston etc. For special events more exotic cars from Italy, Japan or Australia are put into service. Only the machinery and axles were adapted to their new location. The rest—the colors of the cars, advertising posters, old wooden seats–is original… Look, there is a green streetcar and the next to it a polished steel car… Just behind, in the distance, an orange one…The idea of ​​this line using historical cars was born in 1983 when the city of San Francisco decided to organize a summer “trolley festival,” to which many US cities have contributed. The festival was so successful that it was repeated the following year, and so on until 1987 when the summer exhibition turned into permanent use… But in our Mustang every second counts tic… tac 7 minutes 42 seconds… We head back at high speed toward downtown where the streets go up and downhill, some, such as Lombard Street, at more than 30% grade. This latter has become a symbol of the city. Lombard Street runs through the Russian Hill neighborhood, one of the forty hills of San Francisco. In fact, although it is about three miles long, it is most famous for a steep 600-foot-long winding section of eight hairpin turns on a 28% grade slope just 412.5 feet in a straight line. The street is very flowery. Massive plots and pots have adorned it since the 1920s. 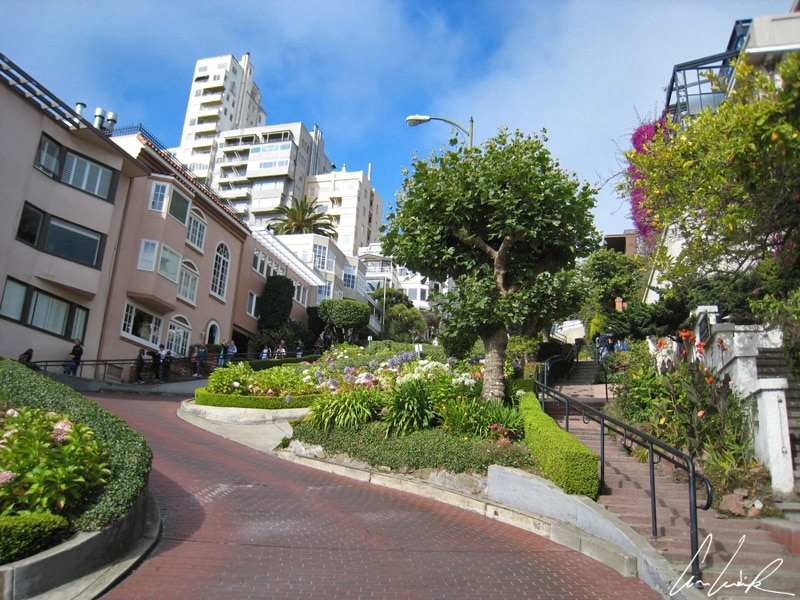 Familiar landscapes unfold in the background at incredible speed: Alcatraz Island, silhouetted against San Francisco Bay, and Coit Tower–the Lilian Coit Memorial Tower, to be exact, 210-feet tall at the top of Telegraph Hill. This cylindrical tower was inaugurated in 1933 in honor of the firefighters of San Francisco. Coit Tower was built with a bequest from Lillie Hitchcock Coit for the beautification of the city. Lillie Coit was the widow of a wealthy banker and fervent admirer of the city’s firefighters. Looking at the tower, we can see a resemblance to the nozzle of a fire hose, and many claim that the tower was intentionally so designed… despite denials from the architect. The statue in the foreground is dedicated to Christopher Columbus. From Telegraph Hill, we have a beautiful view of the city: the Golden Gate Bridge, Alcatraz Island, the Bay Bridge, Russian Hill and the Financial District.

Vroom, vroom … Ready to continue the chase? But is your courage flagging ?… Since you are not racers, let’s continue by public transportation, but not just any public transportation! Have you ever traveled on a “national landmark” ? No ? So it is time to board a San Francisco Icon, the cable cars, pulled by a cable running below the street at a constant speed of 9.3 miles per hour. These museum icons were listed on the National Register of Historic Places in 1964. Out of twenty-three lines built between 1873 and 1890, three remain in service: Powell-Hyde, Powell-Mason and California Street. The cable car has no reverse, it must be turned by hand at the end of the line. Since August 2, 1873, when Andrew S. Hallidie operated the first cable-car on Clay Street, the cars have worked perfectly. 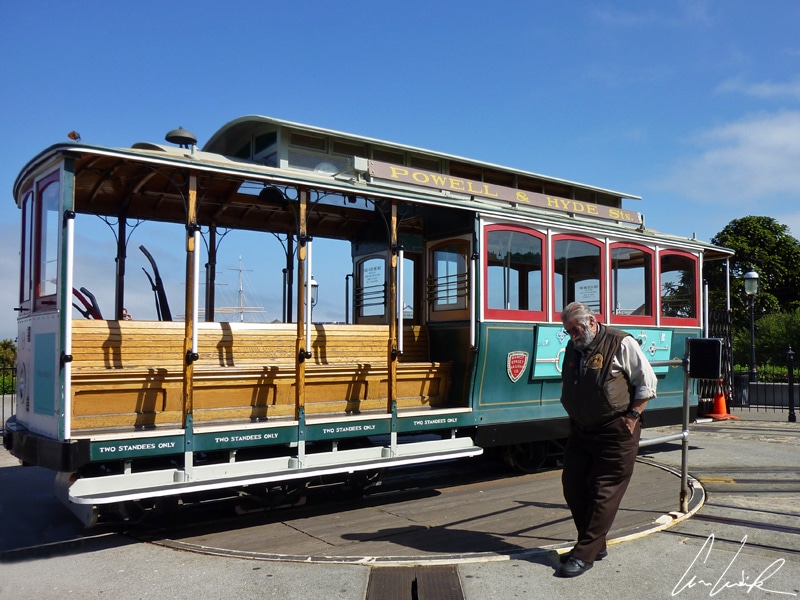 The Golden Gate Bridge, a symbol and one of the most popular landmarks of San Francisco, was named after the gold that was found in the area around 1850. The following “gold rush” contributed greatly to the development of San Francisco in the 19th Century. Formerly named the “impossible bridge to build,” the Golden Gate Bridge was inaugurated on May 27, 1937 after four years of construction and a bitter struggle against the elements: strong, violent, almost incessant winds, swirling tides and currents, and blinding fog. It is easily recognizable by its orange vermillion color, “international orange,” a color chosen for its resistance to sunlight, weathering and for visibility in fog. Each week, a team of painters touches up the paintwork using about 2 tons of paint. This unique suspension bridge—the main span is 4,200 feet long and the entire bridge 8,981 feet–links the city of San Francisco to Marin County, and is anchored by two massive towers rising 746 feet above the water of the Strait. The Golden Gate Bridge is one of the wonders of the modern world.

Leaving behind the misty atmosphere of the Golden Gate Bridge, we encounter another symbol of the city of San Francisco: the Transamerica Pyramid, the tallest skyscraper in the city skyline. Located in the business district at the intersection of Columbus and Montgomery Streets, this pyramidal tower in a futuristic shape is 853 feet in height with 50 floors, and, including the antenna, about 1,100 feet tall. The Transamerica Pyramid was built by William Pereira in the years 1969-1972. Of course, only its pyramidal shape links it to the Pyramids of Gizeh. Its pointy hat… turlututu… illuminates the night: San Francisco s’embrume / Quand San Francisco s’allume / San Francisco, où êtes-vous / Lizard et Luc, Psylvia, attendez moi… lyrics by the French singer Maxime Le Forestier translated as, When San Francisco gets foggy / When San Francisco lights up / San Francisco, where are you / Lizard and Luc, Psylvia, wait for me… (San Francisco – Maxime Le Forestier). But, where is the famous blue house of the song ? Is it hidden among the famous Painted Ladies on Alamo Square Park at 710-720 Steiner Street ? This line of Victorian homes built between 1892 and 1896 by Matthew Kavanaugh is painted in three or more colors to enhance and embellish the architectural details and is known as “postcard row.” The block is one of the most photographed sites in San Francisco… so take time to admire the magnificent row of seven houses and wander in the area, full of colorful houses and remarkable architecture. Have you noticed the windows ? They often extend from the facade in bays. This brings more light into the rooms and brightens the dark redwood interiors.

Another area interesting for its architecture is the Civic Center, site of legal and cultural institutions. The largest is the magnificent City Hall. Its impressive golden dome, at 307.5 feet taller than that of the Unites States Capital by 19, has a diameter of 112 feet. The monument is inspired by the Basilica of St. Peter in Rome. The construction of the present building started in 1913 to replace the earlier City Hall destroyed in the 1906 earthquake. It opened in 1915. The back of the building faces Van Ness Avenue, the front opens onto a small square surrounded by many lovely buildings: Symphony Hall, the Herbst Theater, library, a museum… But our tour is approaching its end… If the San Francisco’s historic financial district and downtown offers the panorama of hilly streets that have become well-known through many soap operas and colorful houses of remarkable architecture, we cannot leave the city without visiting the Mission district. The Mission district, commonly called “The Mission” is the oldest district of San Francisco and one of its most exotic and colorful neighborhoods. Spanish missionaries settled here in the late 18th century founding the Mission San Francisco de Assisi. Thus was born today’s metropolis… In this colorful district it is impossible to miss Balmy Alley, a small alley where containing the greatest concentration of murals in San Francisco. There are so many murals in this small street that it is difficult to know where to look. The themes of these “Street Arts” are varied and include Indian resistance, AIDS victims, Mexican cinema, Japanese manga comics… there is a mural for everyone. A little further away, a garage door looks great. This colorful neighborhood, artistic, vibrant and always on the move, offers frescoes on every corner… The Women’s Building is a must-see. It is a three story building representing women worldwide (goddesses, maternity, portraits etc.). In your search for “Street Art” do not hesitate to stop in one of the many taquerias. Finally to end the suspense of Maxime Le Forestier’s song, San Francisco, it is in this neighborhood that the famous blue house is located. It was recently repainted blue, a plaque was placed on the façade. Finally we could not possibly leave San Francisco without visiting its oldest surviving building, the Mission Dolores. It was on this location that on June 9, 1776, that two Franciscan Fathers,Palou and Cambon, from Mexico celebrated Mass in front of a small log cabin, the Mission Dolores. This was five days before the Declaration of Independence was signed. The church received the name San Francis in honor of St. Francis of Assisi, founder of the Franciscan order. The 40 inch thick adobe walls have allowed this building to survive the 1906 earthquake. The redwood beams that support the roof are original and are held in place by leather straps. The ceiling is decorated with Ohlone motifs and columns that seem to be made of marble, are actually made of wood. The neighboring basilica, to the right of Mission Dolores, looks like a Mexican church with its baroque ornamentation. The building had been destroyed in the 1906 earthquake and was rebuilt in 1918. 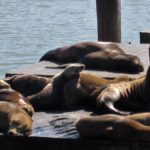 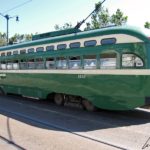 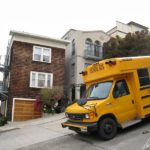 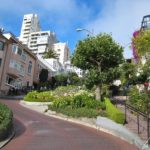 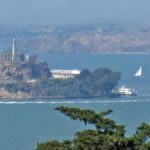 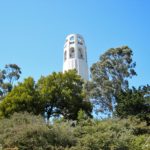 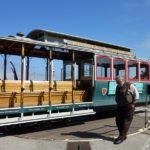 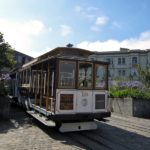 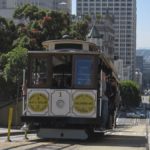 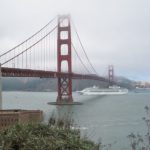 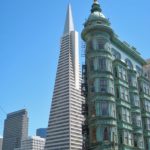 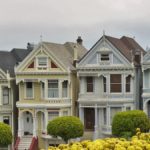 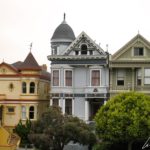 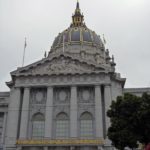 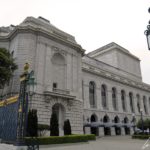 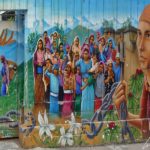 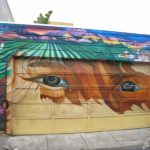 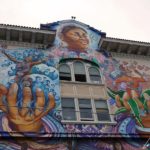 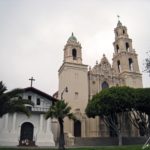 I love San Francisco and have visited the city thrice already. Love the pictures you took of this amazing city! And the drive to LA via Highway 1 is the best road trip.

Thanks. I really enjoy the visit of San Francisco too. And I fully agree with you: the roadtrip on the Highway 1 is just AMAZING… the Pacific Coast is so beautiful !

Lovely post! San Francisco is my home, so I’m always happy to see it from the perspective of travelers. Hope you had a great time!