N as in… Nature

Here we go again… “We dreamed about another land/ that remains a mystery” (Téléphone – Je rêvais d’un autre monde, again)… this time, I think we landed in the right place! As Albert Einstein said, “Look deep, deep into nature and then you will understand everything better“. We followed dear Albert’s advice to experience total solitude in a remote site in full “Wildernes…” The Blue Canyon, located inside the Hopi nation and surrounded by Navajo territory, is completely untouched by tourism. The thousands of people constituting the Hopi ethnic group have their own culture, language, religion, and habitat and are totally different from their neighbors. This Native-American reserve in Western USA is inhabited by the Navajo nation, but not all of it. A small enclave, the indominable Hopi, still resists to the invader (like Asterix the gaul). Given the difficult access to the site through hidden and unmaintained roads (Ah, soft sand what a pleasure), the visitor must have a 4-wheel drive vehicle (thank you Evelyne from the Coyotes’ clan, our Hopi guide for the day)… The unpaved and cracked dirt road leading to Blue Canyon begins on your right at mile marker 256 on AZ 264, if you are coming from Gallup or on the the left if you are coming from Tuba City. It is an unmarked road and easy to miss. In other words, as you can see, it is a godforsaken place without hiking trails, a site to explore on your own and where you can be in full communion with the soul of this strange and fascinating land !

Approaching the site, the long line of two-tone red and white rocks that seem huddled one against the other is stunning. We can let our imagination go and enjoy the sight of these red rocks stripped with white, rocks weathered in to soft, round shapes by millions of years. Look! Imagine that the multitude of small rocks that form a band of merry men and then the rock representing the singer Renaud looks deeply dissatisfied , “for a slightly cracked headlight or for a finger stuck in the air“. But, we must “go, go somewhere else”. Ah, put Julien Clerc (a french singer) on mute. Do you want to leave this place ? Just a short distance from Blue Canyon, Coal Mine Canyon is one of those rare gems that receive little attention. Coal Mine Canyon is first sighted about 15 miles from Tuba City, and the usual viewing area is reached by a half mile drive along a dirt track – narrow and bumpy…

Approaching the site, the flat, thin-layered rocks have a range of contrasting colors and textures; individual strata are white, black, red, yellow and many other shades, and along the canyon edges have eroded into cliffs, mounds, slot-like gullies and tall spires. The erosional forms are similar to many other Southwest parks (such as Bryce Canyon or Cedar Breaks) but none of these can match the variety of both color and form on show at Coal Mine Canyon.

Back to civilization … It is almost the Paris subway during rush hour… tourists of all nationalities gather at the South and North Rim of the Grand Canyon National Park in the State of Arizona. The Park was established on February 26, 1919. The first words coming to mind while standing and facing to a such wonder are naturally “immense” and “gigantic”. The Grand Canyon is 277 miles (446 km) long between Lake Powell and Lake Mead, with a width varying between 3.5 miles (5.5 km) and 29 miles (30 km). The maximum depth is 6,093 feet (1,857 meters) (gigas abysmal!). It was formed about 6 million years ago by the 1,450-mile Colorado River (2,330 km) which begins at La Poudre Pass in the Southern Rocky Mountains of Colorado and flows to the Gulf of California between Baja California and Sonora, Mexico (what a distance!). The same geological forces still continue to shape the Grand Canyon. The river digs up the bottom and erosion attacks the sides: yes, it’s alive! The canyon is beautiful and just to have it for ourself would be a true privilege… But, it is no good dreaming, to paraphrase Philip Gougler…

If you are looking for “wilderness”, go off the beaten paths and dive into the heart of Grand Staircase-Escalante National Monument. Our entry point to nature is Lake Powell, named after Major John Wesley Powell, the first man to explore the Colorado River in 1869. Lake Powell is one of the largest reservoirs in the world and part of the Glen Canyon National Recreation Area, established in 1972, which extends from Page in southern Arizona to Canyonlands National Park in the North over 250 km away. Glen Canyon is easily recognizable by its 3,200 kms of shoreline colored walls of sandstone tinted white, red and orange in striking contrast to the blue of Lake Powell! The area abounds with canyons such as Cathedral Wash, which is initially quite wide, but as you hike deeper into it, it narrows into a wash ressembling a slot canyon with high cliffs on both sides. Just outside the Wash, the Colorado River offers stunning beauty, and gives immense pleasure. This is one of very few places where you can admire the river alone, apart from a few rafters who may go by in the front of your eyes.

Wiregrass Canyon is another canyon that leads not into the Colorado River but into Lake Powell. This canyon offers magnificent cliffs sculpted by water and hoodoos (fairy chimneys), as well as other evocative shapes such as the Spartan warrior who is watching us from the corner of his eye as we progress into the canyon. For fans of hoodoos, the Southern part of Grand Staircase-Escalante Monument is a dream place full of numerous strange rock formations and multicolored shapes: white, red or brown.There is no trail to follow; we can explore the area on our own. Some hoodoos are really impressive (over 7 meters high), others have photogenic forms: look at this one, we expect it to come alive and speaks to us !

I think we will stay a while in this world that stimulates our imagination … We are becoming downright “Stone” ! 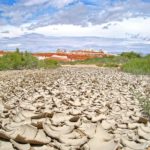 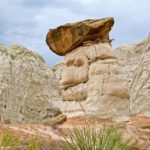 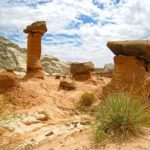 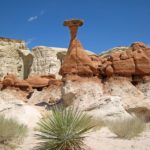 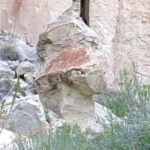 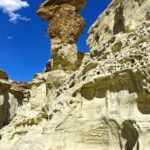 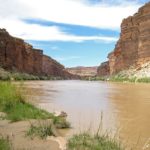 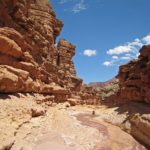 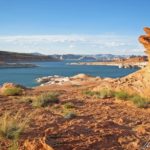 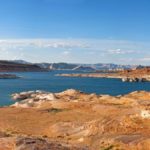 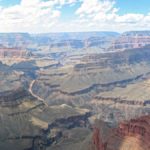 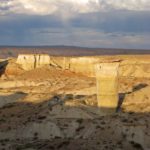 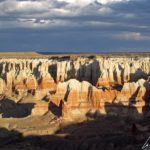 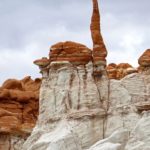 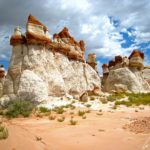 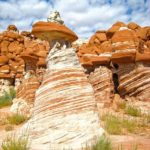 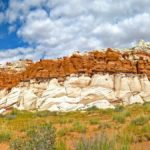 These images are stunning! I haven’t visited the west but I’d love to mainly because of the mountains and gorgeous canyons. Your pictures capture exactly my imagination of what venturing the western wilderness would look like.

Pictures of the Blue Canyon are mesmerising, just started googling about this place. 😛

Gorgeous pics and great description of a landscape that is so special. I haven’t made it there yet, but I sure would love to!

Whenever I look at balancing stones like that I’m in awe. My husband tells me that they’ve remained poised like that for millennia. I always respond asking him what if I’m the unlucky one who stood below or above one at that very second when it comes down. Some how the more I looked at your post the more I knew that it was a conversation we would definitely have on the trail. Lol. I love your pictures and I would definitely love to see the national parks in US some day.

Such a gorgeous part of the US – I need to go on a road trip to explore it more! Love your photos!

Love the beautiful scenery and any place that is off the beaten path. I really hate crowds but think this is such a unique experince and love the amazing two tone scenery and would enjoy learning about hopi culture. Thank you!!

Wonderful post! I actually just came back from a trip through western America and what stood out to me was a guy working at Grand Canyon tells me someone falls into the canyon at least once a month?!?! Your photos are beautiful x

Wow! This looks amazing! The South West of the United States is one of my favorite areas. While I’ve been to Lake Powell I would love to explore more of the Blue Canyon and the Hopi area. Sounds like you learned a lot about their culture and life.

Those red and white rocks look amazing. I have been wanting to go to Colorado for some time. This just makes me want to go even more.

This landscape reminds me so much of Cappadocia, Turkey, which is one of my favourite places. I’m sure I would love exploring this region of the US too! Lake Powell looks amazing.

It looks like a lot of amazing landscapes to see. It’s a stunning part of the country. It seems you have been to places not everyone can access. Thanks for sharing.

What incredible photographs and what beautifully written post! Must be amazing to visit such spectacular natural wonders without any crowds around you.

Before I say anything else. I would like to appreciate your photographs! I loved the way you have captured through your lens. also It is so amazing to know that you experienced these places without any crowed around you. which Indeed helps to experience the place more nicely 🙂