Lake Powell has many more treasures, some of them easily accessible. Horseshoe Bend is a beautiful horseshoe-shaped meander of the Colorado River. The contrast between the emerald green of the Colorado River, which flows 340 meters below, and orange cliffs above is magnificent. The site is accessible from U.S. Route 89 via a 1.5-mile hike round trip. Rainbow Bridge National Monument is another natural wonder in Southern Utah, a State of Western USA. It is also easily accessible from Page, Arizona via a boat ride and a short walk. Rainbow Bridge is described as the world’s highest natural bridge. The explorer John Wetherill discovered this natural wonder in 1909. The span of the bridge is usually given as 275 feet, but recently, using new technology, the span was measured at 234 feet, 42 feet thick and a width of 33 feet at the top. It is a sacred site for the Navajo Indians calling the bridge “Nonezoshe” or rainbow turned to stone; therefore, it is forbidden to walk under the bridge…

Finally, the overview would be incomplete without a visit to the White House… Was the White House relocated from Washington D.C. to Northern Arizona ? Have we slipped into a new dimension thanks to Mr. Quinn Mallory ? No, of course not, the White House is a campground located in Paria Canyon/Vermillion Cliffs Wilderness situated 30 miles West of Page, Arizona, on Highway 89. The waves of rock in red and white, or rather white and red are amazing. The rock formation has soft curves, rounded shapes, forming domes reminiscent of the shape of the Capitol. These white, pink and red waves evoke a figurative composition with harmony in color. Around the corner, before reaching the river bed–almost dry at this time of the year–we recognize a familiar face carved in stone. The mountain trails offer a magnificent spectrum of red, pink, salmon, orange, and white. We are continually tempted to take a photograph to immortalize the scenery surrounding us.

We could not leave Lake Powell and its surroundings without experiencing a “slide” into one of the most best-known slot canyons: Antelope Canyon on Navajo land, East of Page. A practical exercise before exploring Antelope Canyon is to place a ribbon on a table and, holding each end flat, and enter the strip through the middle and twist it a quarter turn. Then you have a fairly accurate picture of the bottom of Antelope Creek. The Arroyo, a tributary to the South Shore of Lake Powell and dry most of the year, dug two narrow, separate slot canyons, Upper Antelope Canyon or the Crack and, further north, Lower Antelope Canyon or the corkscrew. The Navajo named Upper Antelope Canyon Tsé bighánílíní, which means the place where water runs through rocks, and Lower Canyon Hazdistazí or Spiral rock arches. Upper Canyon is more visited than the lower canyon because it is easily accessible. Upper Antelope Canyon is certainly a fascinating slot canyon even if it is neither the narrowest, the longest nor the most deepest. The latter, however, is the only slot canyon into which at midday (in summer) a thin beam of sunlight penetrates to the bottom, transforming it into a true art gallery… “Shadow or light / Which one of the two will enlighten us ?” (Calogero – L’ombre et la lumière).

The rock walls have been sculpted by water into surprising shapes. Beams of sunlight radiating down from the openings higher up, revealing a beautiful palette of colors gold, orange, red, gray and white. Unfortunately, the crowd is dense and at peak hours, we need to be patient and wait for the previous tour to exist. After entering the narrow canyon at ground level, the canyon is about 400 meters long and quickly saturated by the groups that come and go. Despite the unpleasant number of visitors, after entering the canyon, we walk with our eyes constantly moving in search of a particular light, a specific angle for a perfect shot, without really knowing how the photo will turn out. We go through rocks with different tones of pink, red, ocher, brown, almost black-blue. We want to linger in front of such beauty and regret going so fast, but being part of a group we cannot linger.

Are all slot canyons are similar ? No offense to Mr. Capello, emcee of a French TV show from 1976 to 1987, I would say “Ni oui, ni Non” (neither yes nor no). To see for yourself go to another stunning slot canyon, Canyon X, located on Navajo land about 40 minutes from Page, Arizona. Canyon X can only be visited through a travel agency. It is on private land and not listed on any maps. Unlike Antilope Canyon, there are no crowds in Canyon X, and you can take your time visiting the Upper and Lower Canyons. Lower Canyon X is very narrow with narrow beams of sunlight, which give the rock a “blue-gray”. Upper Canyon X is larger, which means that daylight is ever present, and the colors of rocks are change through tones of pink, purple, ocher, brown or blue depending on the time of day.

Total change of scenery: on the road taking us back to Phoenix the Wupatki National Monument, established in 1924 in North-Central Arizona, lies hidden away about a 1-hour drive from Flagstaff. This place, a combination of wilderness and Native American ruins, is what we imagine Arizona to be. Many settlement sites scattered throughout the park were built by the Ancient Pueblo Indians, especially Cohonina, Kayenta Anasazi, and Sinagua Indians. Legend says that the Indians settled to Wupatki after the eruption of Sunset Crater Volcano in the eleventh century. The blanket of ash improved the soil’s ability to retain water and consequently increased agricultural productivity of corn and squash. Near The Wuputki National Monument is the Sunset Crater Volcano National Monument, established in 1930 by President Herbert Hoover. Sunset Crater is primarily black sand and lava flows alongside the volcanic crater. The Lava Flow Trail runs through the middle of the lava providing a gorgeous view of the cone rising 1,120 feet. It is always impressive to wander through a sea of lava (solidified since the last eruption in about A.D. 1080). Near the edge, where vegetation slowly returns, there are funny forms of solidified lava.

Last and final leg of the wide open spaces of Arizona… But why do I have an irresistible urge to hum, “I’m a poor lonesome cowboy / But it doesn’t bother me / Cause this poor lonesome cowboy / Prefers a horse for company” ? Maybe because we feel we are in a middle of a western movie set and at the end of the film: Lucky Luke, in the sunlight, moves away between two candelabra cactus. Thanks to Morris and Goscinny, everyone knows Saguaros cactus ! Saguaro is native to the Sonoran desert around Phoenix. All these imposing Saguaro, which you dreamt of as a child while flipping pages of your Lucky Luke comics, surround you. Some look down on you from a height of over 70 feet. They weigh between 8 and 10 tons. The saguaro has a long lifespan. Some specimens are 150 years old, maybe more. They may grow their first branch only at 75 years of age, and some never grow any arm at all. These are called spears.

In this comic book setting, we walk in the footsteps of the first explorers of Lost Dutchman State Park, located in the Sonora desert 40 miles east of Phoenix. Instead of finding gold, prohibited since 1984, we just enjoy the beautiful landscapes – all kinds of cactus and always the Superstition Mountains in the background. The Saguaro forests are particularly photogenic in the late afternoon just before sunset when the sunlight is softer. You are surrounded by saguaros, right, left, and in front of you. As Jacques Dutronc sang in The Cactus, “the entire world is a cactus / It’s impossible to sit down / in life, cactus are all there is knowing it stings me / Ow, ow, ow, ouch, ow, ow ow” (Jacques Dutronc – Les cactus). But one question nags me: who is this lost Dutchman ? In fact, slang gives us the answer. He was not Dutch, but German. In the 19th century “Dutchman” was slang for German. Thus, Jacob Waltz, who gave the park its name, was a German immigrant. In the 1870s, he supposedly discovered a fabulous mother lode of gold in the heart of the Superstition Mountains, but never revealed the exact location. For 100 years after his death in 1891, many explorers sought the legendary gold mine, but never found it… The legend of the Lost Dutchman’s gold mine is a source for many books, more or less romantic and more or less historical, and a recent series on the History TV Channel, perpetuating the myth of the lost mine. If you think you have the soul of a prospector and an irresistible gold fever, you can satisfy your addiction while sitting quietly on your couch at home… I am not kidding! With friends, you can play “The Lost Dutchman,” a treasure hunter game… As for us, it is time to “slider” on to a new destination. As Georges Brassens, French songwriter and singer, sings so well, “To stay is to exist, but to travel is to live.” (Texts by Gustave Nadaud, a 19th Century songwriter) 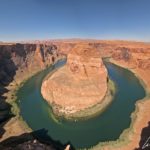 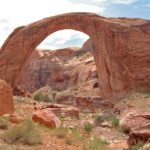 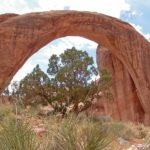 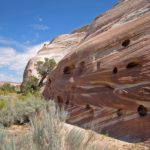 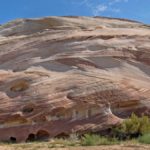 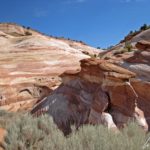 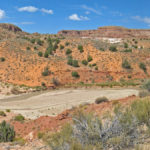 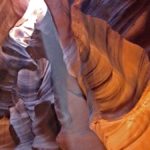 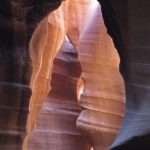 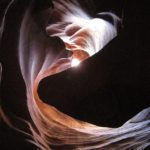 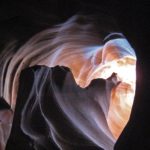 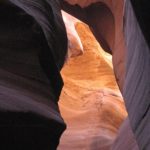 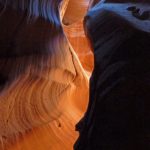 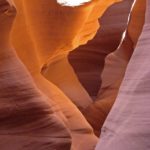 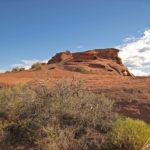 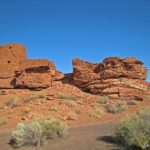 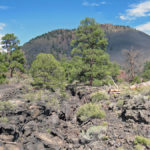 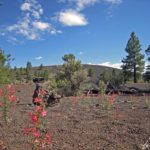 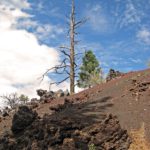 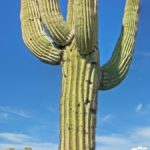 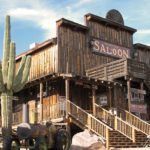 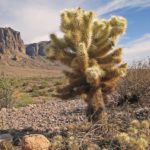 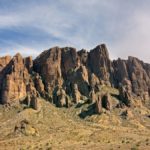