We cannot leave this charming corner of Utah without a visit to Bryce Canyon National Park in Southwestern Utah (a State of Western USA). Bryce Canyon was named for Ebenezer Bryce, who settled below the Bryce Canyon Antitheater. He built a road to the plateau in the pink cliffs in order to carry firewood and timber and also a canal to irrigate his crops (in 1875). Bryce was a Cattle Breeder and insensitive to the beauty of the area. He made the following comment about the canyon, “helluva place to lose a cow.” The canyon kept his name even after he moved to Arizona in 1880. Go figure! Despite its name, Bryce Canyon National Park is not a canyon, but a collection of natural Antiphiteaters 12 miles long, 3 miles wide and 800 feet deep. The colorful pinnacles, hoodoos, are the geological structures of Bryce, colorful silhouettes looking like an army parading in dress uniforms. This National Park, established in 1928, covers 35,835 acres. The park rises to an altitude of between 8,000 and 9,000 feet. From November to May, snow may fall at any time! A beautiful white coat adds charming beauty to the red, orange, and white colors of the rock formations. We could simply rest on the heights of the plateau and enjoy the spectacular view of the constantly changing colors throughout the day, but the picture would be incomplete.

You can feel the magic of Bryce as you move inside the pink or red-orange hoodoos and discover the massive limestone blocks crushed, broken, and carved by time and the extreme climatic conditions of the region. Each fairy chimney with its colors and forms is a work of art. The patterns are never exactly alike… As soon as a wall becomes accessible, each freeze erodes the rock wherever it finds a crack. Water erodes slowly but surely. A fragment breaks off and then another one a little further in… creating columns, needles pointing to the sky, Gothic caves, arches, and the Natural Bridge. For those who have a wandering mind, a Paiute legend says that hoodoos were once living beings, capable of taking human form… but these human beings were so bad that a god or divine essence named Coyote (since reincarnated as Wile E. Coyote in a popular cartoon) petrified them… The non-scientific explanation is more convincing when we examine some rock formations or rather the reverse: who observes who, who knows?

Between Bryce Canyon and Lake Powell, the Cottonwood Canyon Road, Route 400, is an alternative to U. S. Highway 89. This 47-mile dirt road connecting U. S. Highway 89 with Utah S. R. 42 is particularly scenic. It is also one of the few unpaved road crossing part of the Grand Staircase-Escalante National Monument, one of the last wild areas of Utah. This alternate road offers a unique view of the heart of the monument. This is the kind of place we like – off the beaten path – but also a place where patient drivers are rewarded. Cottonwood Canyon Road is very popular with tourists who use it as a shortcut, unaware of the wonders along the way, the endless colorful scenery…

Located about 9 miles southeast of Kodachrome Basin State Park, Grosvenor Arch, rising 150 feet above the ground, is one of the few examples of a sandstone double arch. The largest arch is nearly 100 feet in diameter. The arch is accessed from the North or South via Route 400. It is named in honor of Gilbert Hovey Grosvenor (1875-1966), a president of the National Geographic Society. Grosvenor developed the National Geographic magazine to become one of the world’s best-known scientific publications. Cottonwood Canyon Road is a delight for the eyes as the road offers colorful, constantly changing landscapes: cliffs, badlands, and even a section of peculiar bright-colored forms called Candyland… You feel as if you are suddenly in the online game “Back to Candyland.” But, there is no time to play the world’s sweetest and tastest game. Instead, we stretch our legs and spend the calories accumulated in the game by playing in the Hackberry Canyon… with a walk on dry ground in the middle of bright sandstone cliffs.

After this little taste, it is time to tackle the ascent of Yellow Rock. The short description for the hiker provided by the Bureau of Land Management helps us find a path through debris and rubble… with a steep slope (GPS survey: 112 vertical meters in 368 meters traveled, a 30% slope)! At the pass, the summit is a few hundred meters further on and appears as a massive flat, elongated dome consisting of swirling, multicolored sandstone without vegetation. Yellow Rock contains an incredible diversity of colors and textures. Colors vary from yellow, the main hue, to wavy bands in many shades of white, red, and orange, like an impressionist painting. A painter’s brush strokes have run amok (also called erosion) to create fine multicolored strata. The dome, at 5,500 feet, offers a magnificent panorama of the surroundings. We could spend hours exploring and photographing this amazing dome… but we have another rendezvous with fairies in the equally magical Grand Staircase National Monument. Ah, if only we had, as in Charles Perrault’s fairytale, boots that could cover seven leagues in a single step… Then it would take only a few steps to visit the “White Ghosts” or Wahweap Hoodoos, a collection of white rock spires, and the most visually interesting Tower of Silence. On this site, we wander in silence, like Little Poucet, discovering one by one the various alcoves that house these ghostly hoodoos… These fairy chimneys, wearing crowns of white Entrada sandstone, are very fragile and topped with reddish-brown capstones. The place is quite remote and to access the site, without seven-league boots, you have to walk 9 miles round trip through the treeless Wahweap Wash… We warned you: the Grand Staircase National Monument is packed with places we love, and your effort is rewarded!

After all these adventures, it is time to return to the U.S. Highway 89 and the shores of Lake Powell, where on a beautiful beach we can relax our feet in the water while admiring Lone Rock. To complete this beautiful day, the sun provides us with a final sparkling display: the sky gradually changes color, oranges, purples and pink blend in a perfect symphony and in a few minutes, white clouds turn to rose. In a final burst, the sky seems for the last time to flare a thousand fires before Darkness… “Friends of poetry, good evening” to quote Jean-Pierre Rosnay ! 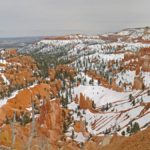 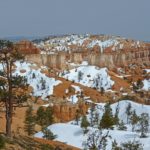 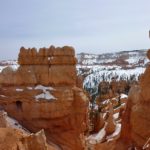 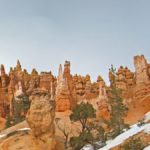 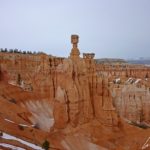 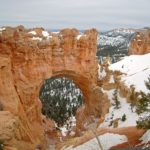 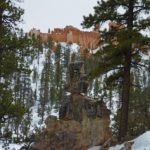 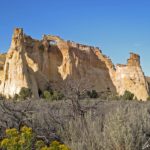 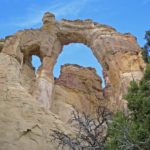 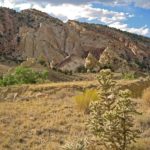 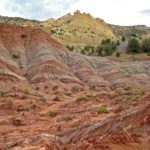 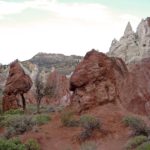 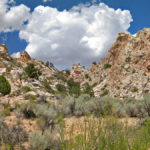 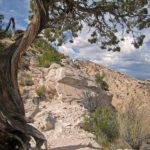 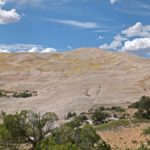 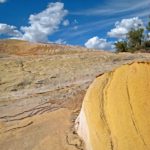 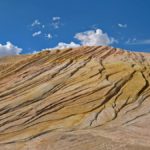 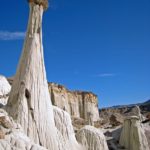 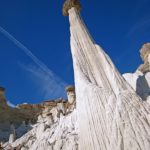 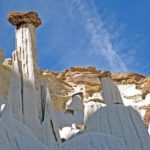 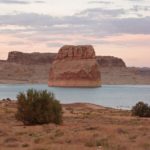 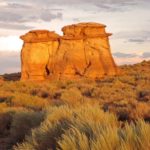 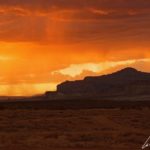 These are some absolutely gorgeous photos. I’ll need to plan a visit now!

Thank you 🙂 There’s a lot to do in and around Bryce Canyon National Park !

I have never heard of Bryce Canyon national park before but it looks amazing! I will definitely come back to this post if I ever travel to Utah 🙂

Bryce Canyon National Park is one of the most unique parks in the US, because it’s home to a large concentration of colorful hoodoos . The park itself is relatively small so you can see a lot in one day, but there’s enough to do if you want stay and explore for 2-3 days too 😉 !

WOW! I’m immediately got amazed by your photos! Definitely, a must-see when in Utah!

Bryce Canyon National Park awes visitors with spectacular geological formations and brilliant colors. However, there’s a lot to see and to do around this park !

I wish I had found this post last summer! We visited Bryce and drove through this area but didn’t have as much time to explore near by. That sunset over Lake Powell looks incredible!

Thank you ! Utah is a stunning state and there’s a lot to do. It gives you an excuse for a return visit 😉

Surreal pictures! I love the ones with the contrast of the snow on the orange rocks.

Bryce Canyon is even more beautiful in the wintertime! For the casual visitor, it might be thrilling enough to hop in and out of the warm car at the various overlooks to see the striking contrast of white snow, red rock, and blue sky 🙂

You had me at the mention of candy land haha. I definitely need to see more of the United States. I’ll definitely have to check out this place when I do.

The Western United States is stunning ! From the staggering wind-hewn canyons of Utah and Arizona, to the dramatic slopes of the lower Rockies, this is and always will be the truest Wild West, every inch, foot and square mile of which seems to have been created only for breathtaking postcards 😉

Utah is such a treasure trove for outdoor lovers and man what a place!!! This has such an interesting history! Those photographs were well timed to match the mood of the place. I thoroughly enjoyed reading about it.. i am hoping to explore this on my own some day❤️

Utah is one of the nation’s great outdoor states, with incredible national and state parks, and natural wonders like you won’t find anywhere else. Welcome to nature’s most perfect playground 😉

Thank you 🙂 There is no place in the USA quite like Bryce Canyon National Park ! The delicately carved multi-hued spires and pink cliffs create the park’s one-of-a-kind landscape.

your photos are stunning. I grew up relatively close and have not been there. I need a trip!

All travel and exploration is amazing. International travel is good. Local road trips are good, too. There is so much beauty to be discovered in our own backyard !

Utah is one of the ONLY states I haven’t been to, and it’s been on my list for years! All the photos I see are so lovely <3

Utah has thrilling adventures for everyone ! It should definitely be on your bucket list. If it’s not, it soon will be…

Such beautiful, well captured photographs! Looks like you had a fantastic trip, I’d love to visit one day

From red-rock mesas to skinny slot canyons, powder-bound slopes and slick rock trails, Utah’s diverse terrain will stun you. It should definitely be on your travel bucket list