N as in… Navajo

Here, I do not thank Quinn Mallory who did not respect the time limits.. Now, we are in a parallel world where language and culture are totally foreign to us…

My name is Yazzie, James Yazzie… and I am your guide in the heart of the Navajo Nation…

We started our adventure at Canyon de Chelly National Monument (pronounced Canyon di ché), one of the most beautiful sites in northeastern Arizona (a State of Western USA). Less touristy than its big brother (Grand Canyon), the Canyon of Chelly is the gateway to the Diné culture as the Navajo call themselves. This 374 km² park was named a National Monument in 1931. The park includes the canyons de Chelly and del Muerto and was continuously inhabited by the Anasazi, an ancient Pueblo people, from the beginning of the Christian era until about 1300.

Canyon de Chelly is not as spectacular as other parks in Arizona or Utah with their vast expanse, but it offers magnificient forms and landscapes. The river running on the valley floor irrigates a green, fertile field year around, which contrasts sharply with the color of the rock, and sustains a living community. The canyon consists of two faults (an impressive Y-shaped cut), each with a width of one kilometer and 30 km in length, carved into a vaste ocre plateau with a maximum depth of 300 meters. Most of the visit is on the rim of the plateau… “Up” of the cliff we are back in our childhood as little boy or girl, dreaming of being an explorer like the famous Charles Muntz… the view is breathtaking. The highlight is undoubtedly Spider Rock, a sandstone spire that rises 750 feet (229 meters) from the canyon floor to the sky: it is simply Nizhoni! This masterpiece of nature is also a sacred site in the Diné culture. According to legend Spider Rock recalls the “Spider Woman”, one of the most important goddesses in Navajo mythology who taught Navaho women to weave. From the canyon floor, the canyon walls are impressive for their height, colors and patterns. Well-preserved ancient troglodyte ruins are visible on the rock walls of the canyon where the Anasazi civilization lived prior to the Navajos about one thousand years ago.

Just a short distance from Canyon de Chelly, the area offers other magnificent monuments shaped by the caprices of the elements over thousands of years. It is magical to visit places where the beauty of nature makes sense. The Ventana Mesa is one of these hidden places. Hope Arch literally bewitches anyone with its gorgeous structure featuring a span of 65 feet and a vertical opening of 70 feet. I forgot to tell you in this world, it feels like being on the island of Lilliput, a country invented by Jonathan Swift in his 1726 novel Gulliver’s Travels: true Lilliputians !

These sites, natural arches and natural bridges, monumental or smaller dimensions are an irresistible attraction for human eyes. These wonderful and graceful bridges keep a fragile and improbable balance, suspended mysteriously as time goes by.  The Natural Bridges National Monument is also within the Navajo territory offers nice surprises for visitors. This remote and little-visited site is located in southwest Utah and access requires determination. This natural area of 31 km² contains three of the five largest natural bridges in the world, each sculpted by small desert rivers called washes. The water has cut fragile faults out of the solid rock of White and Armstrong Canyons. Flowing in the stream bed of the canyon water has forcefully cut the rock to create three natural bridges. In 1883 the prospector Cass Hite, who wandered through the region in search of gold, was the first white man to discover these bridges. In 1904, National Geographic magazine published an article about this wonder, bringing awareness of the area to a wider public. Only four years later in 1908 President Theodore Roosevelt established the Natural Bridges National Monument.

The Hopi nation living in southern Utah gives natural names for these three bridges: Sipapu, Kachima, and Owachomo. Sipapu Bridge, the second largest natural bridge in the world is  67 meters high and 82 meters wide. Its name means “place of emergence”, an entryway through which the Hopi believe their ancestors entered into this world. Kachima is named for rock of art. Owachomo Bridge, the newest of the three natural bridges, means “rocky mound”.

You feel like a six-inch high Lilliputian when you gaze at the spectacular view across the deep meanders (300 meters in depth) of the San Juan River. These meanders live up to their name, Gooseneck, for a total length of 5 miles, but all within only one linear mile !

The entire Navajo Reservation serves as a symbol of the entire Wild American West offering scenes of “cowboys and Native-Americans” built into the collective imagination by Lucky Luke, Marlboro’s adverizing, and western movies starring John Wayne. The Navajo called the site “Tsé Bii ‘Ndzisgaii“, meaning “Valley of the Rocks”. We all admire this panorama of  vivid red  sandstone buttes rising in the middle of the desert in movies. Who does not dream of riding at dusk through this breathtaking scenery ? Stagecoach features four scenes shot in Monument Valley and one of the scene shows West and East Mitten. In tribute to a scene from the movie The Searchers, a place in Monument Valley is named John Ford’s Point. Today, the Navajos replay the scene… We can almost imagine a “western” remake of Groundhog Day !

Monument Valley, or “little Monument Valley”, is  also called the Valley of the Gods and is the result of a long process of soil movement and erosion. Several million of years ago, the area was a vast, flat plain. A large quantity of sediment was generated by the erosion of the Rockies, located to the West, deposited here, and transformed over time into rock. The land rose due to a period of uplift transforming the plain and the Colorado plateau. Water and wind began their work of erosion and sculpted mounds and other rocks characteristic of the region. Nature is an artist!

But it is now time for us Lilliputians to move forward and to discover another world. “We were dreaming of another Land / that remains a mystery / a land less down to earth” (Téléphone, a famous French rock band)… without getting crushed while leaving Navajo territory by the Elephant’s Feet. 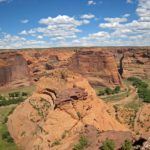 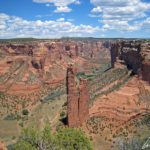 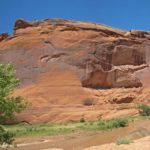 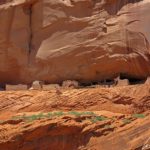 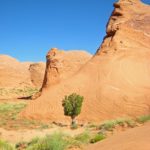 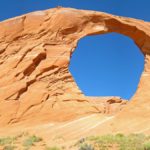 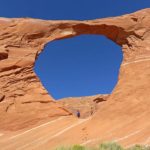 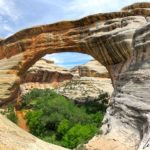 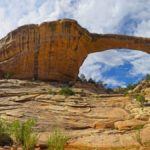 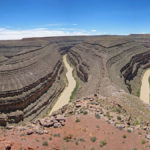 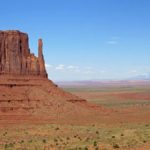 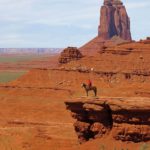 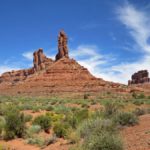 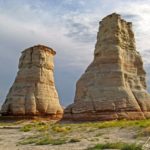