And no-one goes outback that’s that

Our discovery of the Kimberley region ends at Kununurra in far Northern Western Australia about 1,380 miles from Perth. Kununurra is a quiet town nestled in the heart of an oasis of tropical fruit plantations where wallabies wander and surrounded by prosperous farms that benefit from the irrigation system of the Ord River. The Mirima National Park, also known as Hidden Valley National Park, is located near the town and features eroded gorges, which give it the name Hidden Valley. The Park covers an area of 8 square miles and was established in 1982. This charming Park with its sandstone formations bears a slight resemblance to the Bungle Bungles with its orange and anthracite stripes… The park is home to abundant wildlife especially visible in the early morning or at dusk. But what is this masked bird straight out of the Commedia dell’arte? Could it be the famous drop bear ?… disguised as the Masked Avenger or simply a Masked Lapwing with an all white neck and large yellow wattles ?

A little further North is the vast Lake Argyle offering the breathtaking sight of the red cliffs plunging into blue waters. Lake Argyle is the second-largest Australian freshwater man-made lake, 386 square miles. Construction was completed in 1971, and the Ord River Dam officially opened in 1972. It makes me think of another artificial lake in the western United States… I am sure you will tell me exactly which. Lake Powell, of course ! Water from Lake Argyle irrigates downstream farmland all year round, including 58 square miles around Kununurra. The lake has a rich eco-system and is home to a variety of wildlife, including an estimated 35,000 freshwater crocodiles.

It is done, we crossed the line and lost 1:30 hour in so doing… all for a brief incursion into the Northern Territory. Nitmiluk National Park, also known as Katherine Gorge National Park, is the gem of the Katherine region and situated about 150 miles Southeast of Darwin. Here we find a landscape of rugged sandstone cliffs, bubbling waterfalls (Edith Falls) and lush rainforest… and a lady kangaroo ! Katherine Gorge is an impressive row of up of thirteen Gorges carved in sandstone by the Katherine River over thousands of years. But what is Christian Bale doing at Nitmiluk in his Batman costume ? We thought the Dark Knight Trilogy over… perhaps a secret shoting of a fourth film ? No, it is an imposter… cunning this flying fox ! This is an amusing association of ideas, and I wondered how Jean de la Fontaine would have written his fable “The Crow and the Fox” on the Australian continent; The Crow and the Flying Fox. Perhaps the result would have been something similar to:
“Master crow sat on a tree,
Holding a cheese in his beak,
Master Fox was attracted by the smell,
And tried to attract him thus:… ” 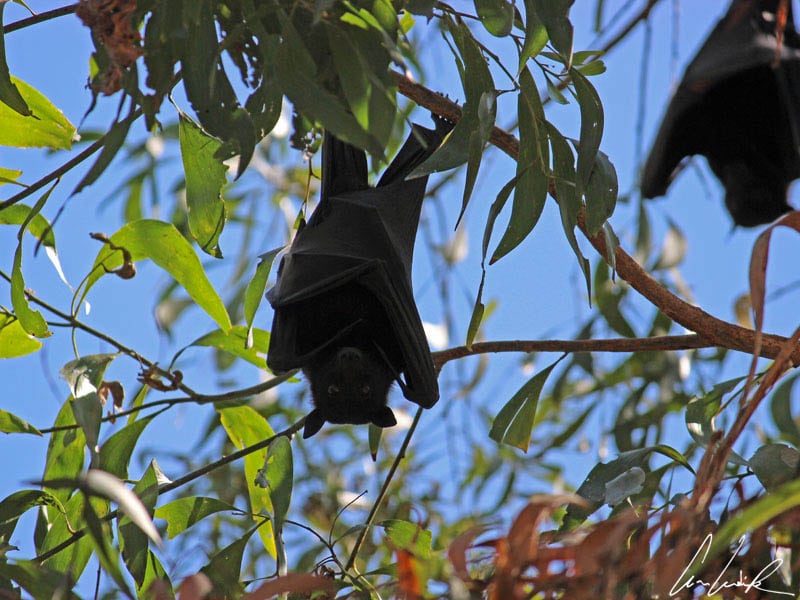 OK, let’s be serious, before heading to Darwin the capital city of the Northern Territory we still have one more Park to visit. Darwin is located on the Timor Sea and is a link between Australia and South East Asia. Since, we are talking about Darwin, Litchfield National Park with its lush woodlands, spectacular waterfalls, natural pools, and tall termite mounds is an increasingly popular destination and located just 62 miles from Darwin. The Park attracts a massive crowded on the weekend ! A few miles from the park entrance, you cross a surreal field of giant termite mounds (the one on the photo is over 13 feet high). A little further on arise magnetic termite mounds, tombstone-like; whose tip is a burial point for termites. The king and queen are installed at the base, and the workers rush to the base and the top. Armies of millions of tiny termites have built the mound aligned in a north-south direction and designed to keep a stable temperature by capturing the morning sun and avoiding the heat of the afternoon. We can only admire the intelligent conception of these buildings, many of which exceed 6 feet in height! From here waterfalls, at regular intervals, attract you off the paved road. You are spoiled by an embarrassment of choices… only 135 steps down and you find yourself swimming in a beautiful pool. The monsoon rainforest thrives along the bottom surrounded by the cliffs Deep Purple from where the Florence Falls descend from an elevation of 210 feet above sea level via a series of segmented tiers between 32 and49 feet in height.

Darwin, North Territory, 90 ° F… Adelaide, South Territory, 50 ° F… Frankly what a strange idea, spending summer in winter! Soon we are back in the South with fleece and long pants ready to begin the journey to the North again. It is like Sisyphus with his rock… almost at the goal and then all over again ? Temperature change and a total change of scenery; we cross the Clare Valley, known for its outstanding Riesling and Shiraz (not liking the wine, I trust the reviews). The first vines were planted by the Jesuits in Sevenhill in 1851, just 15 years after the first Europeans arrived in South Australia. The Australian writer James Halliday (no relation to Johnny Halliday !) said, “Unlocking the secrets of the Clare Valley is a pastime open to all who visit this most beautiful part of Australia.” Dinky-di this writer, surely fond of fine wine, had indeed taken the time to admire the landscape of vineyards, rounded hills, vast eucalyptus groves, undulating fields of rape in the wind, but with a merino sweater on legs (it must be the shock of the temperature !) and the antiquated villages. All mixed in among tours of the vineyards… but we already have all this in the Swiss Valais, claro !

After this bucolic walk amid grassy meadows, vineyards, and sheep, it is time to head towards the Southern Outback. Peter Garrett of the Midnight Oil group sang, “And no-one goes outback that’s That.” Indeed, for many Australians it is a legendary place populated by tourists and Aborigines and a destination too difficult to imagine: it is too hot; there is too much sand, too many flies… about flies, it is true that it feels a bit like the skin of Troll Hébus (Trolleybus !) except that we do not give them the sweet name of Fifine for example. For those who do not know the Troll Hébus or Puitépée Troll or Haïwépa Troll or Profy Troll, all from Phalompe, a small village of Souardie on the planet Troy, feel free to flip through the French comics Lanfeust or Trolls of Troy :-).

Welcome to the South Australian Outback ! Before continuing our journey to the Flinders Ranges at Quorn, let’s make a quick stop at a small town in the North of South Australia, a town with more crows than people and with the atmosphere of the Wild West. The street named “Railway Tce” is a history lesson and featured in many Australian films made between 1950 and 1987 such as Sunday Too Far Away (1975), Gallipoli (1980), The Last Frontier (1985)… I assure you, I have not seen any of these movies either.

A day starts at Wilpena Pound, surrounded by the Flinders Range’s natural amphitheater of mountains and perfect for exploring the timeless charm of the Outback Mountains. Wilpena Pound is located 267 miles North of Adelaide. It is a fortress like with a palette of Ocher rock contrasts against the blue sky, a link in a long chain of breathtaking natural walls that glow in the morning sun. The wall of mountains almost entirely encircles a slightly wooded valley. It is hard to imagine a natural elliptical basin of 31 square miles composed of rocky ridges before seeing it! The Flinders chains, the largest in the State of South Australia, are made up of quartzite and sandstone conferring an ocher and brown color on the landscape. Brachina Gorge, a succession of sedimentary layers covering a period of 120 million of years of the Earth’s history, is just amazing.

Rivers are usually dry, like Bunyeroo Gorge, and trees thirsty, but the scenery is gorgeous ! While strolling through the gently sloping plains of the park, we discover its abundant wildlife such as an emu yawning at the crows, a succession of small groups of wallabies, nose in the air and ears on alert. The shadow of a bird of prey making circles in the warm air currents moves across the jagged walls of the Gorges. Among them is the wedge-tailed eagle the largest bird of prey in Austalia with a wingspan up to 9 feet 4 inches and a length up to 3 feet 6 inches.

Men, also live in Flinders, starting with the “Adnyamathanha aboriginals,” also named ” rock people.” Traditional inhabitants of these isolated and inhospitable lands for thousands of years, the “Adnyamathanha” include five indigenous groups, native to the Northern Flinders Ranges in the area around Lake Torrens and sharing a common identity, culture, and language. Unfortunately, in this remote region history repeats itself. In the 19th century, the settlement of the first Europeans on Adnyamathanha land led to conflicts and killings, stolen land, and bloodshed. These first Europeans pushed the rock people off their land to establish sheep farms and mines. Recently more than 16,000 square miles of land were officially returned to the “Adnyamathanha.” Many of whom still live in the area with cliffs and caves covered with the engravings and paintings of their ancestors.

Our journey continues northward toward the Gammon National Park, featuring deep Gorges, dramatic steep mountains, rivers lined with eucalyptus and Sturt’s Desert Pea. A totally remote wildness where we can come face to snout with a kangaroo on a hiking trail ! And at dusk, the sunset is breathtaking.

“The ancient aura of the Flinders invites all travelers to visit. As you drive past Rawnsley Bluff and Wilpena Pound you’d be forgiven for thinking that it can’t get better than this. But of course it can”

So, catch ya later 🙂 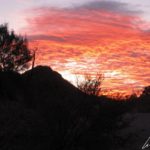 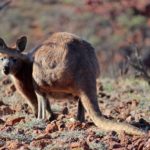 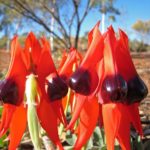 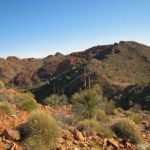 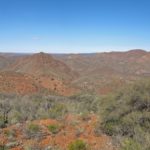 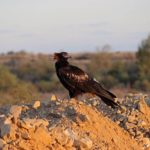 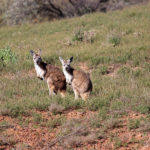 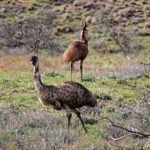 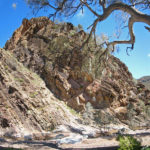 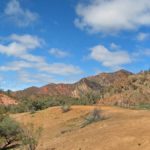 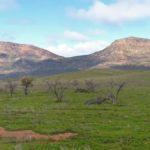 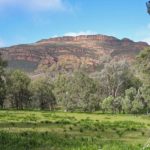 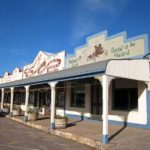 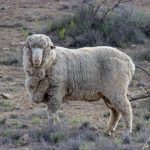 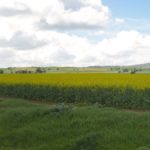 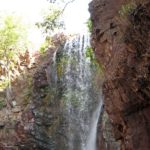 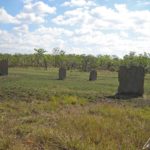 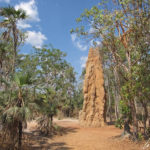 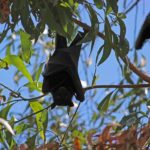 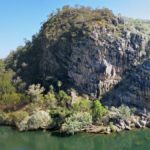 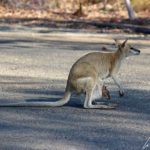 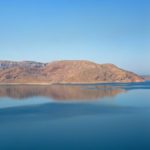 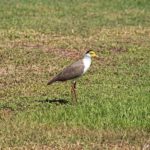 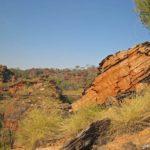