Mmmmmmm … (etc) / In noreni per ipe / in noreni Cora / tira mine per ito / ne domina, with the music of Vangelis in mind I step into the New World ! Here I am in the footsteps of Christopher Columbus, on my way to The Conquest of Paradise. But am I already there? The surrounding subtropical forest, permanent rainbows formed by water droplets in suspension in the atmosphere give a magical halo the fabulous spectacle of the Cataratas del Iguazú (Spanish) or Cataratas do Iguaçu (Portuguese). Welcome to the Iguazú National Park on the border between Brazil, Argentina and Paraguay, in South America. Iguazú National Park was created on January 10, 1939, and became a UNESCO World Heritage Site in 1986. The park is one of the largest forest reserves in South America. Álvar Núñez Cabeza de Vaca, a Spanish navigator, and explorer discovered these famous waterfalls on January 31, 1542, while sailing down the river to find an easy route to Asuncion in Paraguay. Apparently, he just had time to shout “Santa Maria !“, when seeing the first of the many falls. With luck (he had certainly a four-leaf clover, a rabbit’s foot and a horseshoe in his bag!) and ability (and a precursor of an F1 powerboat ?), he avoided the perils of the river and entered the history books by uttering this sentence.

Wooden or iron walkways on both sides of the waterfalls lead visitors safely to the heart of the water and Steam curtains while powerful motor boats come as close to the cataracts as possible. If you plan, brave visitors that you are, to experience the falls by boat, make sure you bring a raincoat. The pilots are not shy about making a detour… under the downpour of the falls. But, this approach, the closest possible, makes you realize the power, violence, and beauty of the falls ! 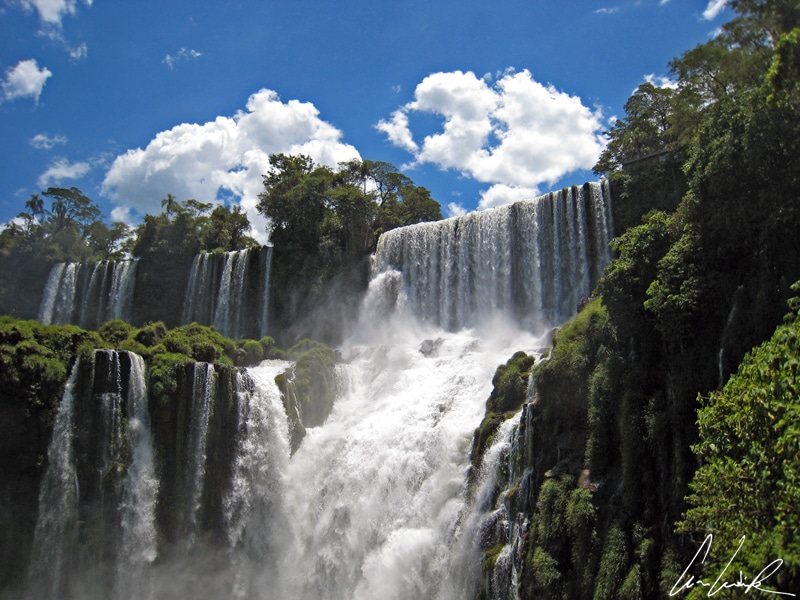 Parc National d’Iguazú, the spirit of the forest

Iguaçu means “big water” in Tupi-Guarani, and we witness a striking display of mountains of water rising from the jungle. We can literally “feel” the spirit of the forest: the moisture, sounds, aromas, and penetrating steam, which fill the surrounding space! In fact, it is not a single waterfall, but a collection of 275 falls extending over 1.7 miles with an average height of 269 feet and an average flow rate of 62,010 cu ft/s. Compared with other notable Falls, Iguazú is wider than Victoria Falls, higher than Niagara Falls, and more beautiful than both. The Iguaçú Falls are the world’s largest and most impressive waterfalls. Winston Churchill, himself, said that Niagara and Victoria were “Cataracts of bathtub” compared to Iguazú. 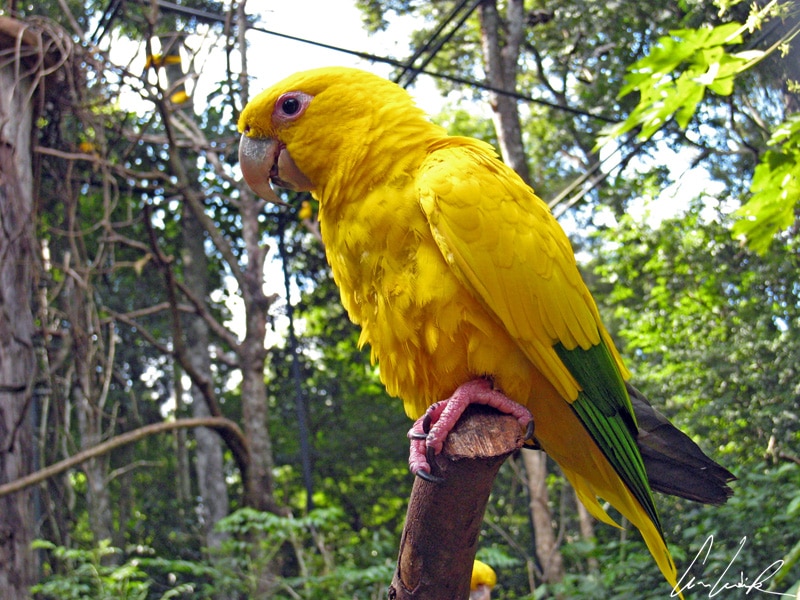 But besides all these stories of O, this national park offers the greatest sanctuary of biodiversity in Argentina. No other region has a comparable number of wild species: over 200 vascular plants, 420 species of birds including the Toco Toucan, the symbol of the park. The Toco Toucan’s most noticeable feature is its huge yellow-orange bill measuring between 6 and 9 inches in length giving the bird its weird look. But contrary to what we might think, the bill is relatively light for its size because the inside is mostly hollow. The Toco Toucan also has striking plumage in a range of colors, a black body with a white throat, chest and upper tail and some blue around the eyes. At the bend of a path, you may also have the chance to encounter another famous bird, the Aratinga Guarouba… or Golden Conure. The plumage is the colors of its country, yellow with green remiges (Brasil Parra Pa Pa Pa Pa…) and of a football team that has set many dreaming, but whose nemesis is a rooster…. just laughing, we all take off into flights of fantasy. The park is also home to more than 80 species of mammals, including the Coatis, friendly small creature, and mascots of the National Park. Coatis means “long nose” in Tupi-Guarani, an evocative name when you see their long snout ending in a mobile proboscis. They have a thin body covered with a thick gray-brown fur. They measure between 33 and 44 inches, half of which is their tail, and weigh about 8 pounds. Their legs end with long claws allowing them to dig holes. They live both on the ground and in trees. The Corti is a good daytime climber, going down the trees upside down. They are omnivorous and delight in turtle eggs, insects, mushrooms, berries and sometimes even mice and lizards. They live in small groups of five to eight, including females and young males.

But continuing our Mission, like that of Indiana Jones in version 4 or OSS 117 and traveling incognito from Rio (What else?) in movies that made Iguaçu Falls famous worldwide. When you feel you are in paradise, hell is never far away… in the direction to the Garganta del Diablo, known in English as the Devil’s Throat. From the Gorge Station, a 1,3-mile long walkway (round trip) allows visitors a panoramic view of the imposing, impetuous and incomparable chasm called Devil’s Throat, the most impressive of all cataracts. The route crosses several islands of Misiones forest, and in the calm of countless streams “yacarés” (caimans) and “herons” feed on small fish. Then, after the silence comes the big jump. From three major platforms, we can watch the show of the Iguazú River. Approximately half of the river’s flow falls into this long and narrow gap, the Garganta del Diablo, and into the riverbed 269 feet below. The Devil’s Throat is a horseshoe fault measuring about 492 feet wide and 2,297 feet long that creates a powerful waterfall. The waterfalls produce dense clouds of steam that wet all the lush vegetation around and gives a misty touch to the landscape. The roar is deafening and the view magnificent! This mist creates a sort of permanent light rain that, when it meets a sunbeam, creates stunning rainbows. An invitation to sing Hallelujah ! 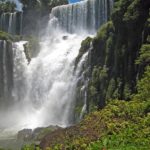 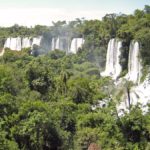 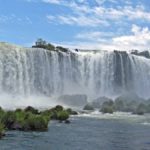 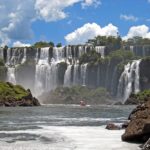 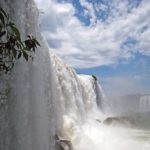 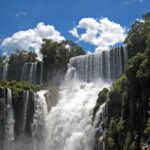 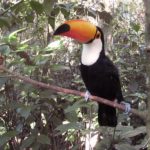 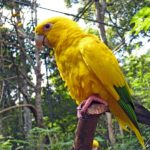 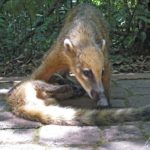 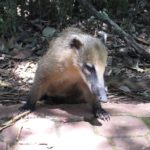 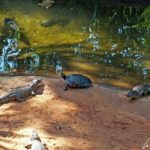 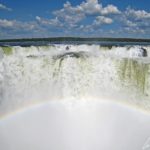 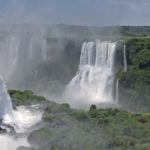 Your pictures are fantastic. Those waterfalls don’t even seem real. I was so impressed that I called my husband from the other room to have a look at your pictures. We are in love with Argentina and want to visit just to see those incredible natural wonders. wow, just WOW!

Thank you 🙂 The visit of the Cataratas del Iguazú is magic ! You can literally feel the spirit of these amazing waterfalls: moisture, sounds, aromas and penetrating steam fill the surrounding space… If you are in love with Argentina, do not miss the coming articles on Patagonia 😉

Your pictures are so amazing! This takes waterfalls to a whole new level :D. It really would make you feel like you were back in time to before everything was so accessible and discovered.

Thank you ! The Cataratas del Iguazú is such a wonderful place :-). And you are right, it is like being an explorer in an unknown land, walking in the footsteps of the spanish navigator Álvar Núñez Cabeza de Vaca !!

Not an area I looked at traveling, but the photos are breathtaking and makes me put this on my bucket list. Love the look of Toucan’s as we don’t get them in Australia. It’s great they set up walkways to see the beauty first hand. Thanks for sharing.

The Iguaçu Falls are phenomenal, and you cannot visit Argentina without travelling to these incredible waterfalls ! The noise that the falls produces is incredible and will take your breath away. As the water hurtles down to the pool below, the spray will refresh you before you descend 🙂

Those water falls look incredible!!!! I’ve never been to this part of South America but it’s on my list!

The Iguazú Falls and the lush subtropical rainforest that surrounds it, is a stunning natural wonder with much to be explore !

Just wow. Great pictures and I did not realize that The Iguaçú Falls is a collection of 275 falls ! I have had the opportunity to visit Niagra falls (from the US side) and this does seem bigger. Do they have a “Maid of the Mist” equivalent ?

I visited Niagara falls as well (from the Us and Canadian sides)… Niagara Falls is about as commercial as it gets, it could easily be labeled a tourist trap. The Iguazu Falls, on the other hand, is a more genuine experience with nature and animals ! You should also know that after you visit Iguazu you won’t be impressed with Niagara 🙂 To put that in perspective, Iguazu Falls is nearly twice as tall as Niagara Falls and rivaled only by Zambia and Zimbabwe’s Victoria Falls, which is taller at 108 meters.

This is incredible! Lately I’ve become more and more curious about South America and that curiosity transformed so fast into desire to see everything with my own eyes. You post is just strengthening my belief that I have to get there in the near future. Thank you for the inspiration!

One of the planet’s most awe-inspiring sights, the Iguazú Falls are simply astounding. A visit is a jaw-dropping, visceral experience, and the power and noise of the cascades live forever in the memory 🙂

Amazing pictures of my country!! I trully enjoyed reading your experience and having a closer look at the Cataratas. You won’t believe it but being an argentinian photographer, I haven’t been to the cataratas yet, I will hopefully on my next trip! 🙂

I’m happy you enjoy the photos ! Really, you haven’t been to the cataratas yet ? You’re right, it’s hard to believe 😉 This place is a paradise for photographers… these falls are so amazing ! I hope to see your pictures pretty soon 🙂

It’s an remarkable post in support of all the web visitors; they will take benefit from it I am sure.

Way cool! Some extremely valid points! I appreciate you penning
this post and the rest of the site is really good.

I have to thank you for the efforts you have put in penning this blog.
I am hoping to check out the same high-grade content by you later on as
well. In fact, your creative writing abilities has motivated me to get my
very own blog now 😉

Thank you 🙂 I’m just happy if I inspire you all using my words and cute photos.