C-Ludik > South America > Bolivia > I dreamed of another world…

I dreamed of another world…

A last glance at the Laguna Colorada in the early morning: this shallow salty lake has regained its serenity and lost its intense red color, but still offers striking reflections. We head toward the desert of Siloli in Southwestern Bolivia, a desert dominated by magnificent ocher colors and surrealist landscape. The Siloli desert features unusual natural sculptures. The most stunning rock formation is the must see Arbol del Piedra known as the stone tree. A fragile-looking geomorphological rock formation, it is an impressive 16 feet high. It marks the entrance to the Eduardo Avaroa Andean Fauna National Reserve established in 1953 in Sur Lipez Province in the far Southwestern region of Bolivia. From there we begin our journey along the “Ruta de Las Joyas,” crossing successively several lagoons: Honda, Chiar Kota, Hedionda, and Cañapa.

In a landscape surrounded by volcanoes in the distance, Laguna Honda, whose name means “deep lake”, is in fact only 2 inches deep. But this shallow lagoon is particularly calm, and the bright blue sky is reflected in this true natural mirror. Laguna Cañapa is an endorheic salt lake with a surface area of 1.4 km2 is also surrounded by volcanoes and home to significant wildlife such as flamingos. It is a breathtaking sight, especially when the colonies of pink flamingos take flight… Two flamingos (speaking Walloon together), dress in pink, gently shake a leg and hobble in steps hushed by the water of the lagoon. They peck at salt larva, then evaporate in a few strokes of feathers… magical!

Following the Las Joyas road, we reach the Salar de Chiguana (415 km2), at over 11,810 feet above sea level. The railway line connecting Uyuni to the Chilean coast crosses the Salar de Chiguana. After the War of the Pacific in 1884 with Chile, Bolivia lost the Atacama Desert, thereby becoming a landlocked country. Under the peace treaty of 1904, Chile guaranteed freedom of transit for Bolivian commerce to the ports of Angofasta and built the Arica-La Paz Railroad, connecting the Bolivian capital to the coast. In the Salar de Chiguana there are small boron mineral deposits that were mined in the early 1990s and exported to Europe. This amazing landscape of salt stretches endlessly to the horizon with the giant volcano Ollagüe looming in the background. The volcano is situated at the border between Chile and Bolivia (height 19,252 feet). It is one of the most active volcanoes in the entire Cordillera Occidental. Although the landscape recalls the Southwestern of the United States, the Salar de Chiguana has a strange omnipresent succulent, the Yareta, which resembles moss stuck on large stones. In fact, the plant is as hard as a rock and grows concentrically extremely slowly for centuries. Locals in remote villages of the Altiplano used this succulent, full of resin, to heat their homes.

Turning to the villages, we arrive at San Juan Rosarion, usually called San Juan, a tiny place, but a semblance of a return to civilization where travelers can spend the night in hotels or, more commonly, shelters built entirely of salt. Walls are made of salt bricks as are tables, chairs, and beds. The floors are grains of salt.

Up very early for another highlight of the trip: the sunrise over the Salar de Uyuni. The “White Ténéré” at 4,086 square miles is the world’s largest salt flat and lies near the crest of the Andes at 11,995 feet. “I dreamed of another world / Who remain a mystery / A landless mundane / Yes, I wanted to jump into the air” (Free translation of the lyrics by the French singer Téléphone – Je rêvais d’un autre monde). All limits fall away in this other world of extreme climatic conditions. It is a timeless and spaceless journey to discover the Salar de Uyuni. As Alphonse Lamartine wrote, “O time Suspend your flight, and you, propitious hours, suspend your course: Let us savor the fleeting delights / The most beautiful today!” The desert plains, desperately flat and blindingly white, stretches out as far as our eyes can see. The Salar de Uyuni is a unique show, a landscape both lunar and solar, cold and sparkling. Only passengers on the space shuttles can see the whole desert.

This natural marvel of the end of the world is, like Titicaca, one of the remains of a vast inland sea that stretched between two mountain ranges and then evaporated. A brief geological history of the Salar tells us that tens of thousand years ago Lake Minchin covered the area. Instead, now we have a desert of salt composed of billions of salt crystals. But there is another version of the story, a charming local legend about the formation of the Salar de Uyuni is linked to the dormant Tunupa Volcano on the Northern side of the Salar de Uyuni rising to 17,457 feet above sea level. Legend says that the Altiplano’s volcanoes could speak and move. Only Tunupa was female. One day Tunupa became pregnant, but the child’s father was unknown. Male volcanoes talked all night and took the decision to remove the small volcano from his mother. This decision infuriated the gods, and they withdrew the right to move, talk and meet from the volcanoes. Tunupa volcano wept so much that her tears mixed with her milk spread on the dry ground; thus was born the Salar de Uyuni.

Amid this white area stands the Isla Incahuasi Quechua “the Inca house.” It is also called “Isla de los Pescadores” in reference to the neighboring island “Isla del Pescado” featuring giant cacti on an area of 61 acres and forming a hilly and rocky projection in the middle of the Salar – salt flat. There are walking trails allowing tourists to hike easily to the summit for a superb view of the vast white Salar with Tunapa in the distance. In addition to cactus in bloom, the island is also inhabited by the Bolivian vizcacha, Andean rabbits of the Chinchillidae family.

The Salar is composed of 10,000 billion tons of salt of which more than 25,000 tons are extracted annually. It is also rich in minerals, and its crust covers a pool of brine, exceptionally rich in lithium, an estimated 140 million tons and a large part of the world’s reserve. The depth of this salt flat is 460 feet. It consists of 11 distinct layers of salt whose thicknesses varies between 2 and 10 meters. To be in the middle of the Salar is like being in the midst of an infinite mirror; visual perceptions will surprise you. Fresh and salt water rivers underlie the surface of the Salar. This water, which passes under the salt crust, carries with it air that will find a way out. Ojos de Agua are round holes forming small eyes in the heart of the Salar where air and water well up from under the salt crust.

The train graveyard, the “cimenterio de los trenes“, Uyuni, is the last stop on this Bolivian journey. It is located 2 miles outside the city of Ulyni. A legacy of the age of steam, dozens of old steam locomotives from the early years of the last century peacefully end their lives in the middle of the Salar. From the late 19th century to Mid-twenty century, Bolivia knew a golden age as a result of silver mining. When the silver era dried up, there was no need for a train network. Uyuni, in Southwestern Bolivia, was a transportation hub for trains carrying silver and other minerals from the surrounding mines to the Pacific Ocean. Another early departure at dawn to enjoy a Bolivian landscape like no other ! 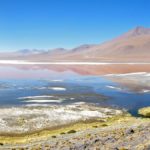 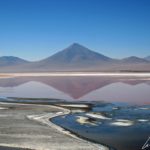 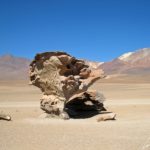 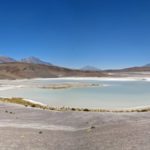 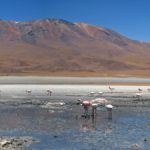 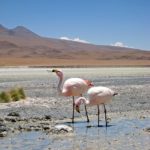 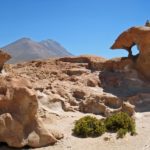 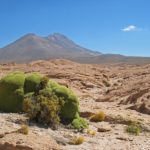 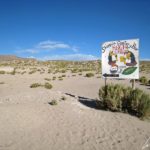 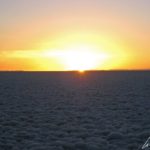 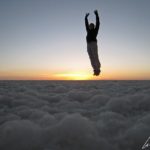 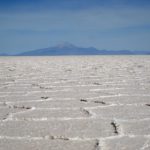 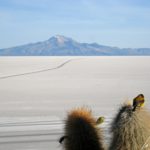 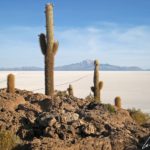 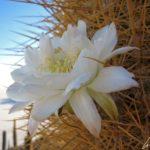 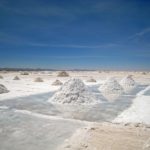 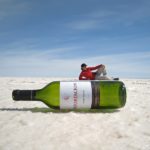 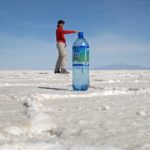 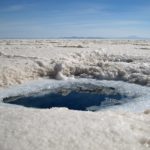 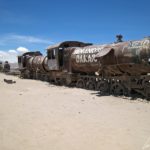 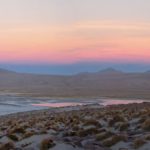 I am in love with your pictures. Such a soft glow – they are fabulous.

Thanks 😉 With endless mountain vistas, white and turquoise salt lakes, vivid blue skies, and some of the most isolated, barren, and stunning landscape in the world, the Altiplano of Bolivia is a fascinating place in which to travel.

Your photos and descriptions are absolutely stunning. You can almost feel like you are there! And I can absolutely see why the sun rising over the salt flats would have been among the highlights of your trip. The rock formations and vast spaces almost remind me of the Mojave here! Thanks for sharing!

Thank you 🙂 Bolivia is a fabulous and fascinating country to visit, and a beautiful country in which to travel with endless photographic opportunities to capture those memories of your holiday forever.

Wow, this is an absolutely must go place for me. Looks stunning, especially that sunrise. Well done for making the effort to wake up early for it. Definately worth it I believe! 🙂

During a visit it is worth making the effort to observe the sunrise and sunset, an experience that will leave you with incredible memories of the staggering beauty of this region of Bolivia !

Wow! What an incredible destination! I haven’t been to Bolivia yet, but when I do, this will be on my list!

Bolivia’s Altiplano is one of the most dramatic landscapes on the planet. They call it “The place where Heaven meets the earth” !

What an exotic destination! You don’t hear too much about Bolivia. I would love to see photos of these buildings made of salt, sounds interesting!

Within these buildings everything from the walls and floors to the beds and tables have been carved out of salt taken from the Salar de Uyuni salt flat 🙂 It is amazing !

Nina | Nina Near and Far

I love all the visual perception photos from places like this haha. What a neat destination!

Céline C-Ludik
Author
Reply to  Nina | Nina Near and Far

The beauty of this thick and hard crust of salt and the snow capped mountains on the horizon make it to one of South America’s most awe-inspiring landscapes ! This place is a paradise for photographers, for the visual effects that can be achieved 😉

The sunsets you can view around there should be put on post cards! So amazing 🙂

It is worth making the effort to observe the sunsets, an experience that will leave you with incredible memories !

A photographers paradise. Amazing pictures and a beautifully written experience. I’m quite impressed with Bolivia’s antiplano…hope to visit it for myself someday soon!!

I fully agree: the Altiplano is a vast expanse of breathtaking scenery !