What is the flag of Lapland or the Sámi flag ?


The Lapland or Sámi flag is recognizable by its ring and “gákti” (traditional Sami clothing) colors: blue, red, green, and yellow. This flag is common to the four countries of Lapland: Norway, Sweden, Finland, and Russia. 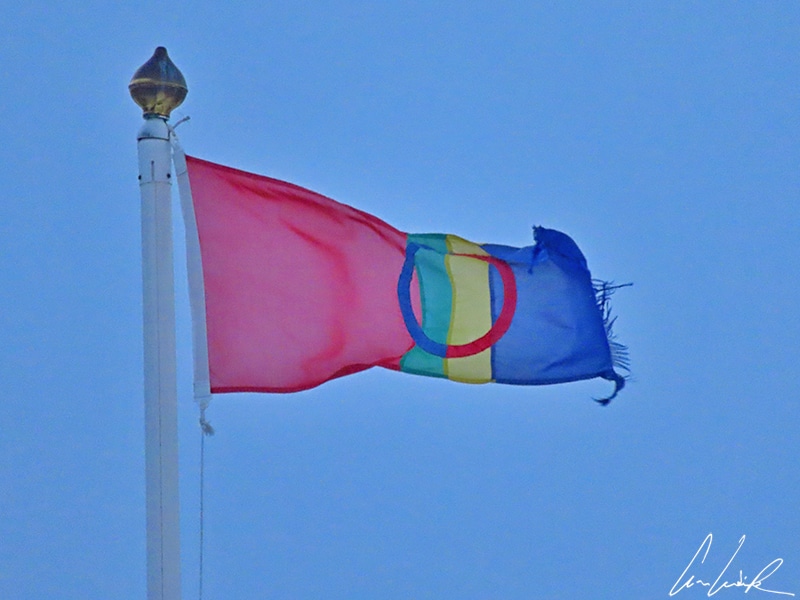 The flag of Lapland or Sámi flag flying in the wind.

The first unofficial Sámi flag was designed by a Sámi politician and activist from Kárašjohka, Máret Stueng in 1962, and used red, yellow, and blue colors. It is visually reminiscent of the gáktis, the traditional Sami costume. The design was used locally as a flag and for various Sámi publications and demonstrations in the late 1960s. However, Norwegian Sámi artist Synnøve Persen is most often credited with creating the first unofficial Sámi flag. In 1977, during the protests in Alta over a dam, Persen, as a student project at the Academy of Fine Arts in Norway, made the artwork “Forslag til Samisk Flagg” (Proposal for a Sami flag). Born from her own inspiration or simply an act of plagiarism, this tricolor flag was adopted as a symbol by protesters across Norway, becoming the first, albeit unofficial, Sámi flag.

The final version and the official Sámi flag was recognized on August 15, 1986, by the 13th Sámi people’s conference in Åre, Sweden. The flag resulted from a competition sponsored by the newspaper “Sámi  Áigi.” Norwegian Sami artist Astrid Båhl won the competition, beating more than 70 other candidates. According to the artist, the flag was inspired by the poem “Päiven Pārne” (Sons of the Sun) written by Sámi Protestant priest Anders Fjellner in the mid-1800s. The basic structure of the unofficial flag was retained. Båhl added the green color found on many southern Sámi “gáktis.” She also added a ring representing the sun/moon symbol that appears on many Shaman drums.

The symbolism of the Sámi flag

The four colors, blue, red, green, and yellow, are known today as the “Saami (national) colors”. The green color represents nature, the blue part the water, the yellow symbolizes the sun, and the red warmth and love. The width of the bands is proportional to the Sámi population in the four countries that make up Lapland: red for Sweden, green for Finland, yellow for Russia, and blue for Norway, the country with the largest Sami population. The central ring represents, in a stylized way, the sun/moon symbol of the Shaman’s drum. While the drawings on the Shaman’s drums are made only in red (using an extract of the sacred alder tree), the motif on the Sámi flag has both blue and red: the blue circle represents the moon and the red circle the sun.