C-Ludik > Asia and Middle East > China > On your feet or on your Chi(k)nees ?

On your feet or on your Chi(k)nees ?

The continuation and end of our discovery of the Fujian Province in Southeastern China. The small town of Gutian, located in the Northeastern part of the Fujian Province is a historic place for the Chinese. Indeed, it is in Gutian that Mao Zedong, Zhu De, and Chen Yi held a meeting known as the “Gutian Conference” in December 1929. It was not a major meeting, a conference, or a meeting of the Central Committee of Chinese Communist Party, but merely the “ninth meeting” of the Communist Party of China for the 4th Army of the Chinese Workers and Peasant’s Red Army, better known as the Red Army which had been founded on May 25, 1928. This meeting, however, allowed Mao Zedong to propose and receive approval for the Gutian Congress Resolution entitled “On Correcting Mistaken Ideas in the Party” — henceforth Mistaken Ideas. And what a resolution it was! Mistaken Ideas was later applied to all People’s Liberation Army (PLA) units. The meeting was held in a building built in 1848 (late Qing dynasty) and arranged around a traditional siheyuan (courtyard). A tour takes the visitor through the meeting rooms, Mao’s office, and his bedroom. It was also in Gutian that Mao Zedong wrote the famous line, “A single spark can start a prairie fire”. 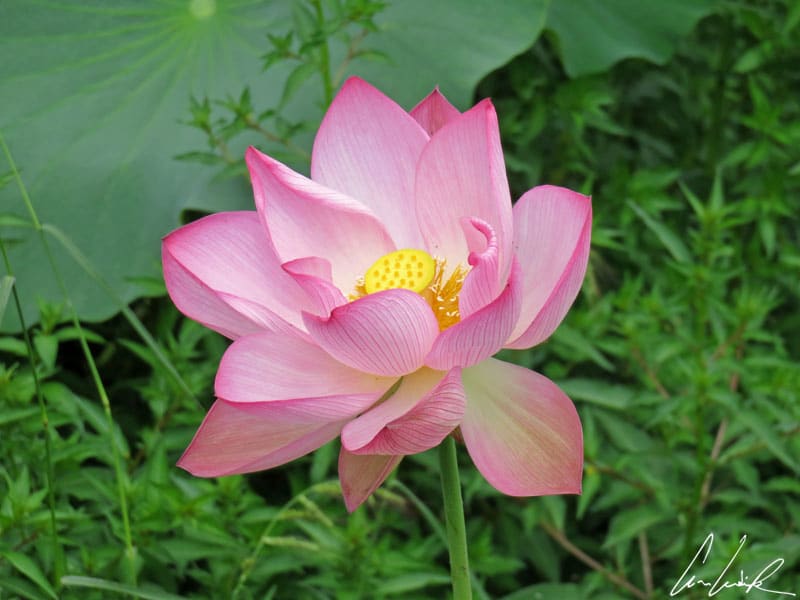 At this time of year, the building is surrounded by fields of large beautiful Lotus flowers. On the large leaves waving in the wind, we can follow drops of water run slowly from one leaf to the other as the leaves move in the wind. Thee Lotus is emblematic of Asia. Its seeds, flowers, rhizomes and young leaves are all edible. The large leaves are sometimes used as a wrap for food. The lotus seed is creamy and quite rubbery — a true treat for Asians ! Vendors offer tastes of this small snack. The flavor is fresh and slightly nutty !

But enough of history. Let’s dive into nature in the surrounding Guanzhai mountains about 168 miles from Xiamen and covering 48 square miles. The Guanzhai Mountains are renowned for their beauty and majestic landscape. They are one of the top scenic locations in the province of Fujian. While traveling through them, you not only enjoy the spectacular mountains but also the rich collection of peculiar rock and stone formations of all shapes and sizes, with various evocative names such as monkey head. Further, you can go boating on the calm and emerald Shimen lake covered in mist. Surrounding the lake we admire the lush vegetation, waterfalls and strange rock formations along the countless meanders of the lake. The only inhabitants that disturb this tranquility are birds and fish, in this case, black swans. 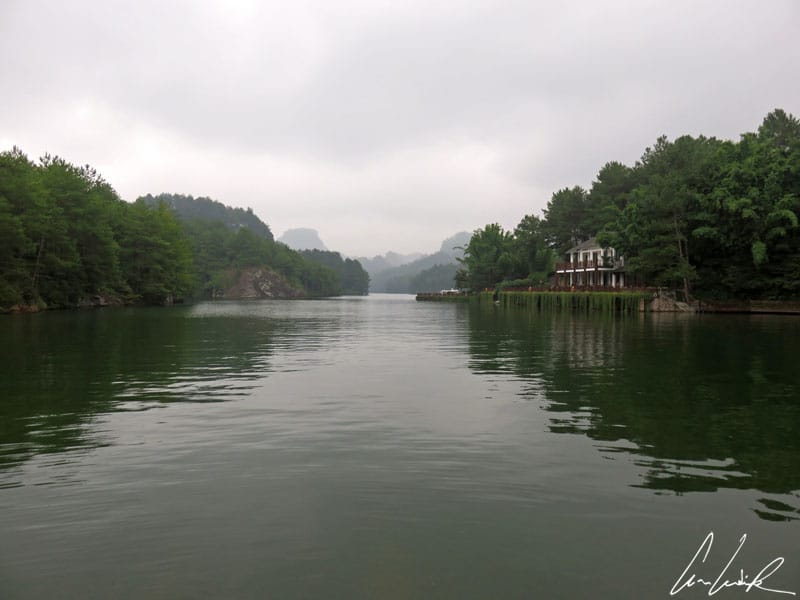 There is nothing better than a real ascent to feel invigorated and to admire the narrow crevices, deep valleys, and pavilions near the summits. And when the fog finally lifts unveiling a striking beauty, the panorama from the major peak, 2,168 feet high, leaves you speechless, especially at sunset when the sun lights up the orange hue of the rocks ! 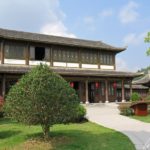 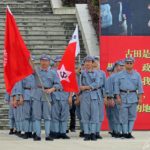 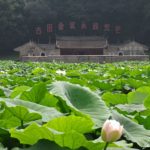 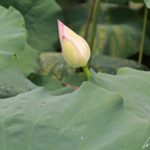 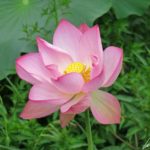 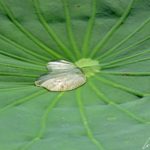 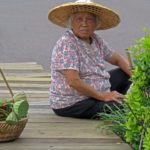 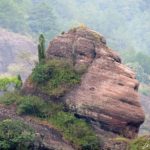 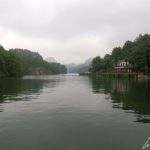 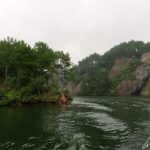 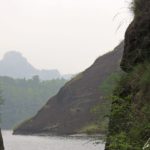 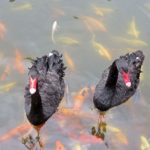 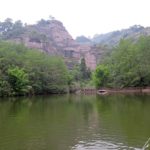 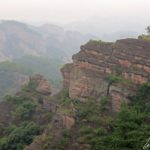 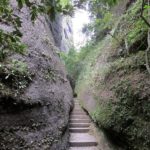 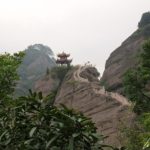 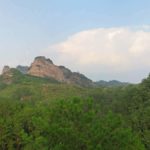 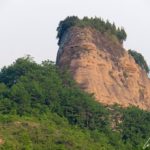 I have actually been to this place and where they have the things celebrating the life of Mao. What I do remember the most is the beautiful people and the amazing landscapes that they have there. It’s just unlike anything else I had ever seen.

China is an amazing country, one that should be on every traveler’s must visit list. This large country has incredibly diverse landscapes ! Virtually whatever scenery you find most beautiful, you will find it in China 🙂 Chinese people generally love Westerners, so most are quite friendly. Everywhere we go, people want to stop and chat and take pictures with you. You can meet some amazing people and hear many intriguing life stories…

Looks so peaceful and tranquil.

In addition to places of historical interest, this area also abounds in natural beauties including various mountains, river valleys and basins… It’s so relaxing and peaceful 😉

The Guanzhai Mountains look beautiful and the Lotus flowers are so pretty! I’ve never been to China but I’d like to go one day.

Fujian is blessed with a rich history, famous historical sites and beautiful natural landscapes. The beauty of the mountain and the emerald Shimen lake are worth to see !

The lakes and the lotuses look so pretty. I have never been here but the nature and beauty seems unmatched.

Fujian is a southeastern Chinese province known for its mountains and coastal cities. It brings together the culture, art, architecture and history landscapes ! In Fujian, you can enjoy lots of beautiful scenery, but also all aspects of China 😉

Oh wow, I have never heard of this place before. It’s amazing how many beautiful places there are in China. I would love to go visit one day.

“The Refreshing State” is how the tourist board want Fujian Province to be remembered. After a few days travelling through this mountainous region on China’s southeast coast, I think that’s a pretty good description 🙂

This sounds like a real adventure! The place looks amazing

The area is famous for tea and everywhere you look you’ll see rows of tea plantations. The Guanzhai Mountain is a beautiful natural area. During my visit, the mist and fog only added to the mysterious air: an experience that will live long in the memory !

This looks like yall had a great adventure. The picture looks amazing. Thanks for sharing.

One of the most amazing things about China is the variety of experience that can be enjoyed in one place. Old and new, sweet and spicy, rough and smooth, all combine into a rich cultural tapestry 🙂

That is such a different experience that I didn’t realise was in China! You’ve taken some beautiful photos.

Thank you 😉 China has a lot to offer whether you love big cities or tucked away villages, mountain hikes or temple hopping, history or modernisation.

Wow! The nature there is just magnificant! I have enjoyed reading your post. Thanks!

China is a very big country and one may have different experiences in different parts of the country. I mainly concentrated on the Fujian region, where glorious sunshine beats down on paddy fields and picturesque villages set within a wall of magnificent mountain ranges and where traditional towns suck you in to their winding streets and everyday burst of activity 🙂

Omg what an adventure!!!! I would love to visit china one day!!! Hopefully my travels take me there

China is a very big country and one may have different experiences in different parts of the country. It should definitely be on your bucket list. If it’s not, it soon will be… 😉

Such amazing landscapes that every nature lover or traveller would really love to see. Though cities are very famous, I still opt to visit such kind of places. I hope soon I can visit this too.

With this size, and depth, and variety, in China you can see more in one place ! As far as natural beauty goes, China goes bigger and more-varied and spectacular than any country in Asia 😉

Those nature shots look gorgeous! I’ve never been to that area before but I’ve learnt a lot from this post 🙂

Thank you 🙂 The surrounding countryside is tranquil and beautiful, with boats floating along the river, and farmers working in fertile fields bordered by towering karst peaks.

It was an amazing journey ! One of the world’s largest and oldest civilizations, it’s no surprise that China is filled with countless lesser-known gems and hidden attractions waiting to be discovered 🙂

These pictures are incredible! I really want to visit China one day! So much history and culture, absolutely breath taking!

China is a fascinating and rapidly changing country. Old customs and habits hang on as modern skyscrapers go up every second ! This diverse country’s astounding man-made attractions are rivaled by its remarkable natural wonders 😉

I miss China and it’s natural beauty. Specially the south part of China. I can’t wait to explore more, thanks for adding to my intrigue.

China is an enormous country that boasts some of the world’s most densely populated cities, unique tribal subcultures and breathtaking landforms ! There is so much to explore 🙂