Tea for two and too much tea

Fujian Province abbreviated “Min“, is located in Southeast China, bordering, along the East China Sea, the South China Sea, and the Taiwan Strait. The island of Taiwan itself is further off to the Southeast. While Fujian is resolutely turned towards the sea and serves as a hub of communication in East and South China Seas, it also offers undulating mountains, interweaving rivers, and fascinating historic monuments. So, ready for the trip ? 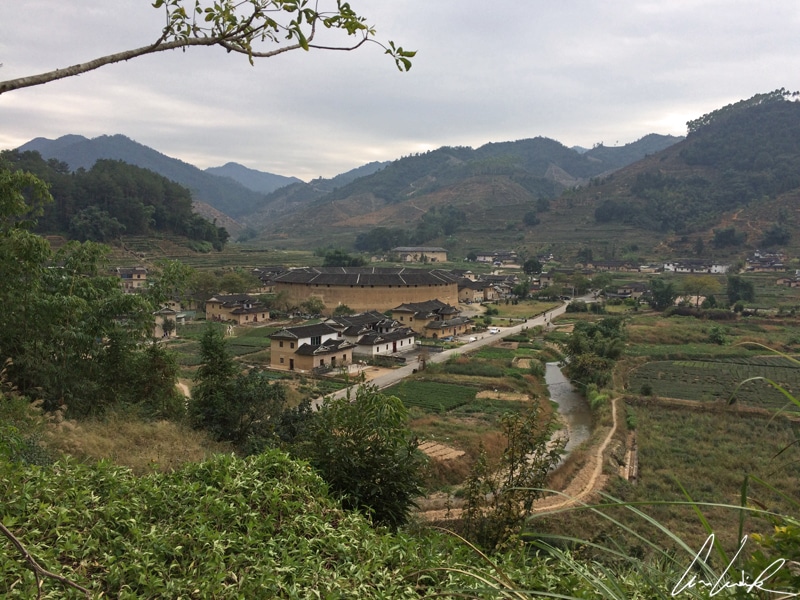 Let’s start with a riddle. The American satellites took us for nuclear silos, but CIA spies dispatched to the scene found that we were innocent mud houses. We were built by the Hakka ethnic minority when they settled in Fujian region. The oldest of us are over 1,200 years old! We are made of mud, stone, bamboo, and wood, are either circular or rectangular in configuration, and house more than 600 people in one single building. Who are we ? We are…, come on, a little effort – we are the most amazing Fujian tulous (土楼; pinyin: tǔlóu, literally “Fujian earthen buildings”), a UNESCO World Heritage site in 2008. The most extraordinary thing about the Hakka’s houses is their simplicity, essentially of clay, mostly circular—the symbol of heaven–but with a concern of harmony that we also find rectangular houses, the symbol of the earth. The Hakka, a long-oppressed minority in China, built their houses and villages as fortresses, easily self-protective. The ground floor has no window only a single front door (overlooking a river) allowing them to fight against external aggressions. Each house is a closed universe. By standing at the center of the Tulou, you feel like you are in the heart of the main square of a village. Each floor serves a different function. The first or ground floor with no window is the kitchen and houses animals, redheads and plump hens run between my legs. The second floor, still without windows serves as a storage area. The third and fourth floors, which are accessed by wooden stairs, are the living area, including bedrooms with balconies where clothes dry in the sun. The temple where the divinity rests and where we come to burn incense sticks is also used to store bikes and strollers. And when night comes, traditional lanterns light the attractive beams of wood. 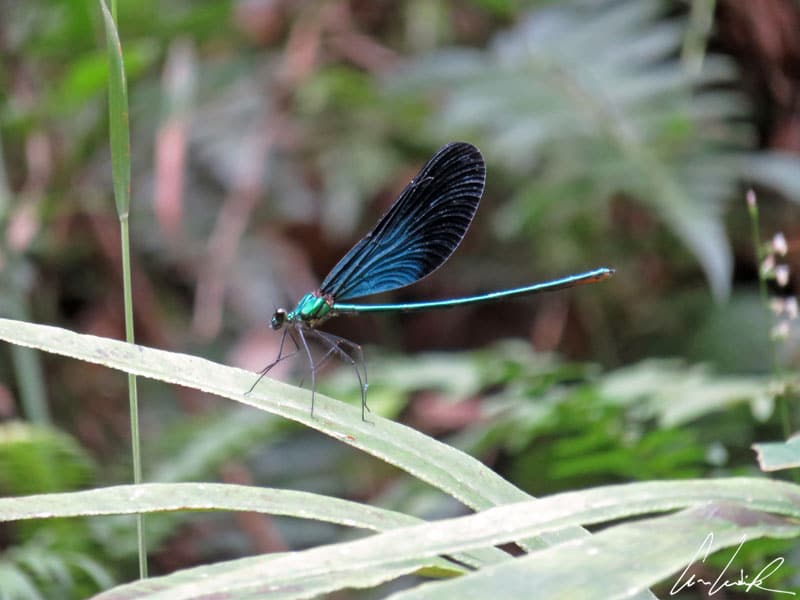 Most houses are built according to Feng Shui principles to ensure harmony between man and nature. The term Feng Shui means wind and water. Following Feng Shui principles the Tulou are often built near a river, in an area surrounded by banana trees. Residents had easy access to water as egrets walk by ! The humidity is also a paradise for dragonflies that flit around us, offering a magnificent colorful aerial ballet. Here, we discover an unspoiled country, where, in the shade of round houses, the inhabitants still cultivate cabbage, tobacco, clumps of giant bamboo, plantations of passion fruit and tea bushes — the latter two have beautiful flowers ! 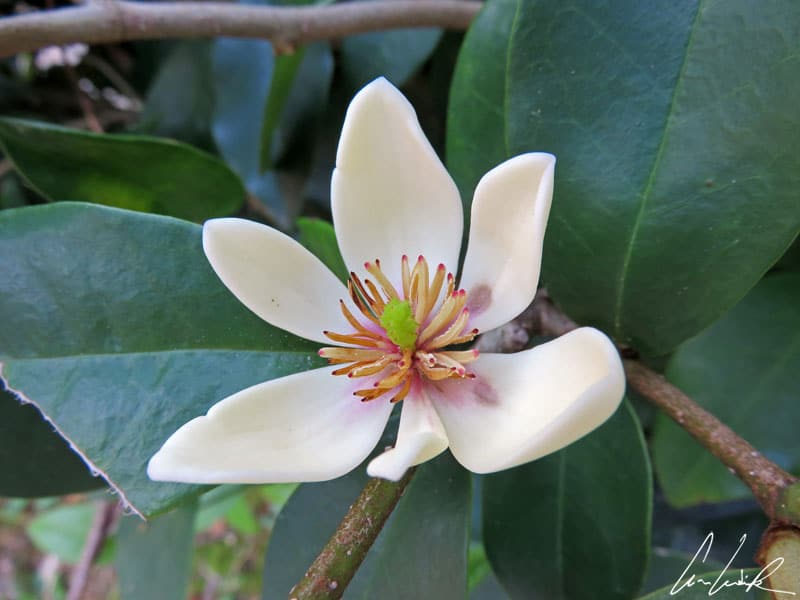 Terraced crops occupy every corner of the valleys– a true vegetable garden open to the sky ! The Fujian province is one of the largest tea-growing areas in China. From its ports, the first cargoes of tea departed to Europe. It is also important for tea itself because Fujian is the only province in China where Oolong tea, or Wūlóng (black dragon), is cultivated. This traditional tea is produced through a unique process, including withering the plant under the strong sun to hasten oxidation before curling and twisting. There are many explanations for the origin of the Chinese name. One comes from a Chinese legend. The tale tells of a farmer who saw a black dragon rising up from a tea plant whose leaves have revealed the woody notes of chestnut and hazelnut Oolong. This tea is also known in China for the color of its infusion: it is called the blue-green tea. Jiang Jianlin introduced me to the tea ceremony in the Tulou “Zhengcheng Lou”. To complete this picture from another century, the wish tree stands alongside the river. The tree is a repository of wishes written on strips of red cloth, which hang from its branches. The tree, preferably very old, grants wishes (which can be about financial and affective needs) for fulfillment by spirit, saint, goodness. Since Chinese popular religion is polytheistic, hooking a ribbon to a tree may cause some unknown deity to grant the wish…

While waiting for the fulfillment of our wishes, we headed to the oldest Fujian village, which has a residential style entirely different from the Tulou and is nicknamed “Folk Imperial Palace”. Peitian village is well-known for its distinctive and well-preserved Ming and Qing Dynasty architecture. Peitian village is located at the foot of the Guanzhai Mountains in West Fujian, about 191 miles from Xiamen City. The village is surrounded by vast rice and peanut fields planted on terraces that occupy every inch of land. With an area of 13.4 km2, this ancient village is home to thirty magnificent houses, twenty-one ancestral temples, six schools, two memorial archways, and one 1000 meter-long Old Street. The water runs through gullies on either side of the streets where villagers wash clothes and then hung the laundry in the sun. Ah, if you wonder what he is writing on the panel, it is the word “Tea”. Going back further up the street, we come across players immersed in a lively game of Mahjong and then an old woman drying rice in the sun. Again, we feel that time has stood still for centuries… 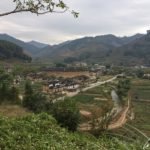 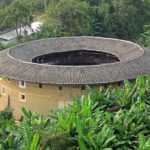 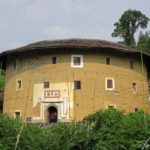 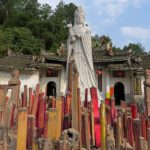 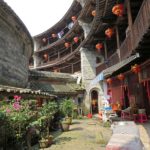 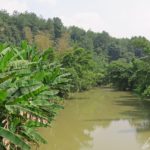 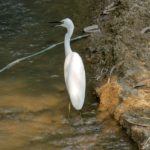 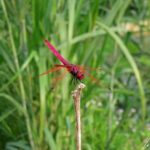 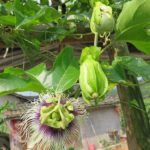 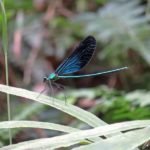 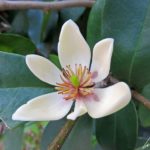 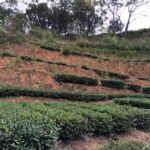 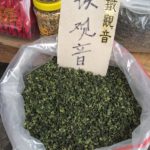 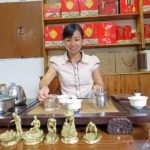 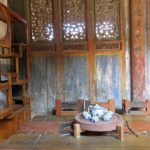 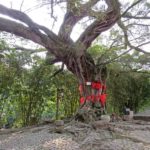 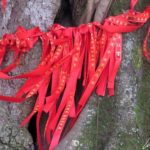 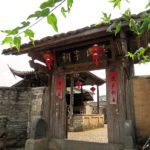 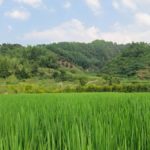 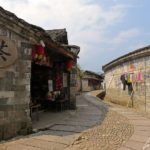 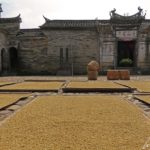 When you visit the Fujian Tulous, you can fully immerse yourself in the Hakka lifestyle ! Once upon a time, entire clans lived inside just one tulou – up to 800 people of one big extended family living together…

Thanks for sharing these great pictures! I love it, nature give a relaxing feeling. We’ll add it to our bucketlist!

China’s storied history and culture have left marvelous landmarks throughout the country. Many of them have now been deemed by UNESCO as essential to the preservation of our global cultural heritage such as the Fujian Tulou. The area is also famous for tea and everywhere you look you’ll see rows of tea plantations. The well-known Oolong or ‘Black Dragon’ tea is from here and the locals place huge importance of the tea making process and then the ceremony to drink it. It was fascinating to see such a traditional art right in the birthplace of tea itself 🙂

Gorgeous! This makes me want to pack up everything and head off into the sunset. The greenery just looks so lush

The area is famous for tea and everywhere you look you’ll see rows of tea plantations. You’ve got plenty of beautiful fertile plains views and winding rivers with traditional architecture !

interesting piece of history and knowledge. I like how you introduced the Fijian tulous with the riddle,very engaging

The famed tulou villages are stunning ! While the outside was meant to deter unwanted visitors, the inside of these fascinating buildings is meant to be an open communal living space 😉

Wow your photos are so vibrant and beautiful. I have been wanting to visit China for so long – you reminded me how much <3

Because there are so many unique and diverse things to experience, a trip to China is sure to create some incredible memories. These experiences will travel with you for the rest of your life 😉

Fujian tulous sound amazing.Would love to visit one day .There are tea gardens in India too and they look very pretty .Dragon flies and ballet made me smile

Deep in the mountains of Fujian are more than 20,000 tulou buildings, built between the twelfth and twentieth centuries 🙂 It’s really amazing ! Like wine, the terroir of the Oolong teas is demonstrated by floral notes, which are subtly different according to the orientation, altitude and soil mineral content of the hillside on which the tea is grown.

Love all these pictures, they are so colorful and stunning, liked the combination of nature and history !

Thank you 🙂 Fújiàn is really an attractive province with a long history and beautiful landscapes.

Fujian tulous including the riddle was a great idea. I love the interesting history shared in this post. The photos make this place seem so surreal and relaxing.