Welcome to “The Grand Canyon State” or Hooo Hahoodzo in Navajo! Arizona is located in the Southwestern United States. Along with Utah, New Mexico, and Colorado it is one of the Four Corners states. Arizona is home to the Grand Canyon, but there is much more to discover. The state features a large array of geological gems… Just two hours drive from Phoenix, the state’s capital and largest city, Sedona is nestled in an extraordinary surrounding among the Verde Valley’s red-rock buttes. The city is the second tourist destination in Arizona just after the Grand Canyon. Sedona is a place that must be seen at least once in a lifetime for its beauty, energy and red sandstone formations.

First, Sedona offers striking scenery at dawn and sunset. The picture is just astonishing and it is not like arriving anywhere else. As you enter the city at sunset bright red and orange monoliths, mesas, and other rock formations line and illuminate the road. After enjoying this mystical moment, travel uptown to enjoy a traditional meal at the Cowboy Club where the menu includes cactus fries and rattlesnake sausage. Dishes are served in a Western atmosphere, straight out of a cowboy movie! Since the 1920s, the city of Sedona has hosted about 80 Hollywood productions, mostly westerns, including the well-known Johnny Guitar, Angel and the Badman starring John Wayne, and Micmac Montana starring Elvis Presley. In the west of the city, streets are named in honor of Hollywood greats. If we had to select an emblematic movie from the long list of those shot in Sedona, it would be without any doubt Broken Arrow (1950), adapted by Albert Maltz from a novel by Elliott Arnold, and which was the first pro-Native-American Western.

he town of Sedona is recognized as a highly spiritual location, and its “spiritual vortices” (regenerative natural energy centers) have an international reputation. It became the New Age capital in the 1980s after the discovery of a “vortex” among the rocks nearby. These energies apparently facilitate meditation and healing of both body and spirit… It is therefore not surprising to see people taking strange body positions next to a rock while delighting in stunning landscapes. The best-known “spiritual vortices” are the easily accessible Bell Rock, Cathedral Rock, Boynton Canyon and Mesa Airport. The city counts numerous gurus and New Age shops. Besides pictures of aura tarot cards readings, palmistry, and psychic consultations, the city offers experiences ranging from acupuncture to spiritual chakras through guided visualization. In short, there is something for all beliefs… But Sedona and its surroundings have much more to offer. Hiking opportunities are numerous. Whatever you may think, hiking in these natural places that we have decided to call “vortex”, guarantees spectacular views of the southwest desert and its giant orange rock formations Courthouse Butte, Lee Mountain and Chimney Rock. In addition explore Oak Creek Canyon where the mixture of towering red canyon walls and green vegetation offers a bucolic and relaxing atmosphere – O time, stop flying… Just watch the racing clouds as mirrored in the water of the river, observe the ballet of hummingbirds, enjoy the sight of a rocky fresco with either smooth or very bright colors… Would we “Slide” like Mallory Quinn and Maximillian Arturo into a parallel world via a “vortex”, a world where the history of the Earth would have evolved differently ?

Into what parallel universe have we slipped ? We are at the heart of the largest and richest petrified forest in the world… the rare visitors are surrounded by thousands of fossilized logs dating from the late Triassic period about 225 million years ago. We are at Petrified Forest and Painted Desert National Parks in Navajo and Apache counties in northeastern Arizona near Holbrook on Interstate 40. The two twin parks cover an area of 378 km², 30 kilometers long from North to South and a width varying between 19 and 1.6 kilometer. They were established as National Monuments in 1906 and National Parks in 1962. At one time the area was a river delta with giant trees growing on the banks. Imagine a vast alluvial plain, crisscrossed by many streams, dotted with tall trees, majestic pines… with crocodile-like reptiles resting in the sun, large amphibians, and early dinosaurs playing hide-and-seek in the ferns… We would almost want to hum the 1974 hit “Le Petit Pont de Bois” (The Little Wooden Bridge) by French singer and songwriter Yves Duteil, “You remember the wooden trunk / That one crossed at one time / To pass the river / Close to the house / The little wooden trunk / Which held hardly / Then by a great mystery / And two very right stakes” (Yves Duteil – Le petit pont de bois)

And then suddenly 225 million years ago, volcanic eruptions destroyed these gigantic trees and covered them with volcanic ash. Buried for millions of years under layers of sediments rich in silica that slowly replaced the organic material and fossilized the logs creating, combination with other substances, various colors in the petrified wood. About 60 million ago the tectonic movement of Earth’s crust began to lift up the Colorado plateau, of which both parks are a part, and erosion unveiled petrified logs, flora and fauna. If we are amazed by the size of the fossilized logs, the colorful formations, created by mixtures of iron, manganese, copper and quartz, are even more amazing… a true delight for the eyes! That we almost forget the gorgeous landscapes of pastel colors, purple, white, blue and all imaginable gradations surrounding these fossils at Blue Mesa. Blue Mesa was named after the blue-gray mounds of clay in the area. 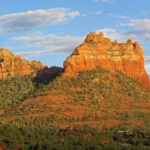 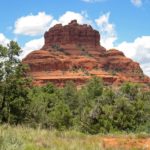 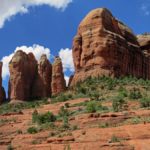 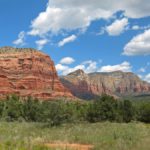 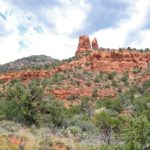 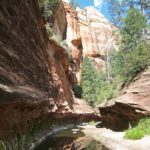 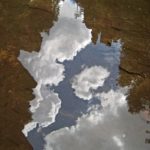 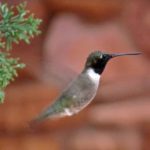 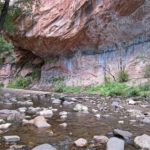 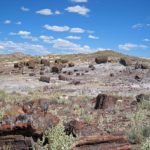 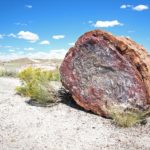 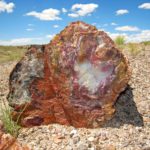 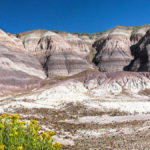 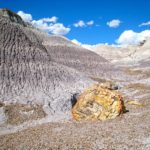