The garden city and its magic lanterns 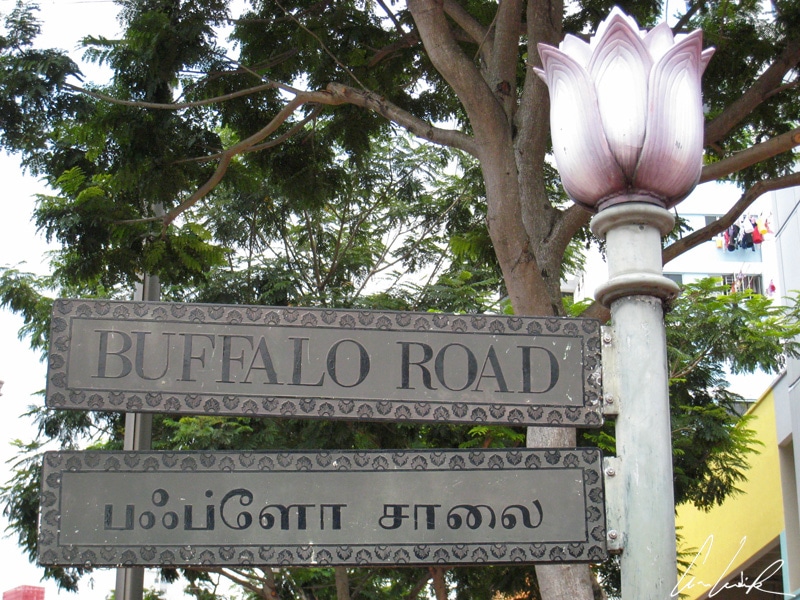 Sated with futuristic buildings, we find another side of Singapore when walking down the streets of its ethnic neighborhoods. Arab Street, a small shopping street, is a labyrinth of colorful houses, bustling day and night and quite near the must-see Sultan Mosque with its massive golden domes. The mosque, the largest religious building in Singapore, was built in 1825 by Sultan Hussein Shah. A spiritual epicenter ever since it has served as an embarkation point for pilgrims to Mecca. Arab Street is a shopping street with “Moroccan” bazaar influences: baskets, fabrics, jewelry, carpet, fabric shops, and bargaining is of course the rule. In addition, traditional perfume shops offering captivating fragrances mingling with smoked golden censers adorn street corners. In these streets, women and men wear djellabas. Again, like in science fiction adventure, it seems that teleportation or teletransportation really exist!

A few blocks away, east of Singapore River and north of Kampong Glam, you can smell the perfumes and spices of India, see the assorted colors of clothing and temples, and hear the lively and captivating rhythms of Indian music – all in Little India. Settling on the terrace of a coffee shop to savor the moment – exploring Little India also means contemplating, breathing the scent, observing and listening to the surroundings – and to order a “kopi ho.” The area seems pleasant, although a bit run down. Ageless old women draped in colorful saris walk quietly and further away in the market; we find men in dhoti. In this neighborhood we can wander as our inspiration takes us, randomly walking among bazaars, markets that smell of incense, arcades and through fruit stands where dragon fruits are alongside tasty mangoes. In Little India street names are written in both English and Tamil. A few steps away, the Abdul Majid Mosque Gaffor built in 1859 is worth a detour. The most attractive element of this religious building is its refined portal with the 25 rays of the sundial decorated with Arabic calligraphy of 25 prophets (the only one of its kind in the Islamic world). To the left of the prayer hall is a family tree tracing the lines of the various prophets. The mosque was completed in 1910 and was recently restored, which explains the vivid colors. The tour continues by Sri Veeramakaliamman Temple, dazzling colors! The temple was built in 1885 and honors Kali, also called the Goddess of Time, Change, Power, Creation, Preservation, and Destruction, the bloodthirsty wife of Shiva. She is portrayed wearing a necklace of skulls and dismembered humans. Not very glamorous ! 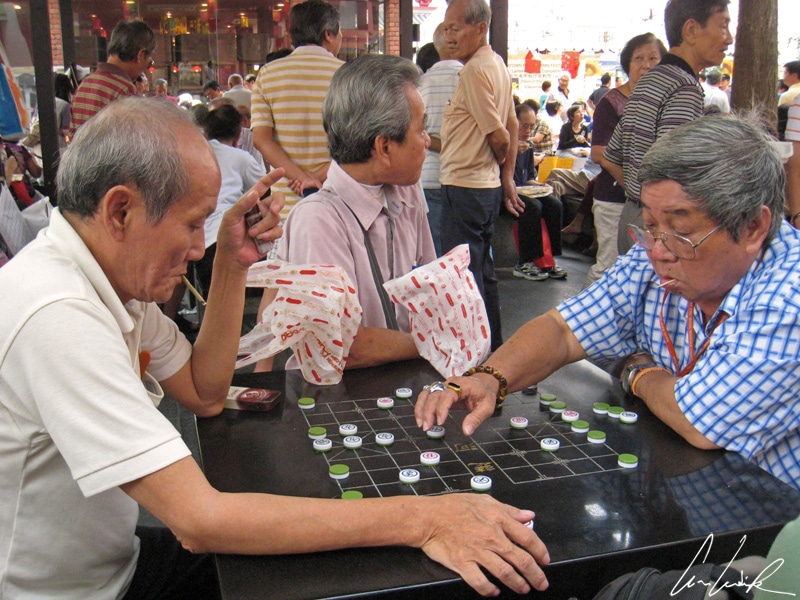 Last but not the least, the unavoidable Chinatown is located within the larger district of Outman, the perfect neighborhood to purchase souvenirs – like calligraphy – and various objects at bargain prices. There is a number unlimited of chopsticks stores (meaning kitchen utensils !). In a square, some Chinese play chess, or rather Chinese chess also called “elephant chess” or Xiangqi 象棋. I trust your pronunciation entirely. This game is played with 16 pieces, including 1 general, two mandarins and 2 elephants for each player. The pieces are placed on a dividing line. A river separates both camps, the red and the blue…

A little further into the local market, just down the stairs into the noise and smell of fruits, vegetables, flowers, spices, many dried products, and fish among others. For Asians fish freshness is crucial. It is common to see eels, live fish, turtles, and frogs in crates. Yes, indeed frogs, or rather bullfrogs. The animals are picked live and then killed and cut up in front of your eyes, an absolute guarantee of freshness! Once your shopping is done, you can take the time to stroll through the streets decorated with lanterns all the way to the Buddhist temple, Tooth Relic Temple Buddha, where you can attend some ceremonies and listen to monks singing.

By a coincidence of the calendar, it is the celebration of the 15th day of the 8th lunar month called Mid-Autumn or the night of the moon and which has become the Mid-Autumn Festival, also known as the Mooncake or Lantern Festival, the second most important festival in Singapore, just after Chinese New Year. This festival not only marks the end of the autumn harvest, but also the time of the year when the moon is brightest. This celebration was traditionally a time to give thanks to the gods. The Mid-Autumn festival has its origins in Chinese mythology and is associated with the story of Chang E, the mythical Moon Goddess of Immortality. As often in China, there is a culinary tradition linked to the festival, Mooncakes月餅 (yuè bǐng in Chinese), the greatest delicacy of the celebration. The Mooncake is round salty-sweet pastry measuring about 3.9 inches in diameter and 1.5 inches thick. It has a rich filling usually made from red beans, figs, or lotus seed paste surrounded by a fine crust. The top of the cake has an imprint representing the Chinese characters for longevity and harmony. The symbol of the moon may surround the characters. The traditional Mooncake may contain a salty duck egg yolk as the symbol of the full moon. The Mooncake represents about 1,000 calories in a 3.9-inch cake. Calories vary depending on the filling, but are always an impressive number. If you watch your weight, you might not want to eat one, but it is also not as good as it is beautiful! As for festivities, the streets, squares, bridges sparkle with thousands of colored lanterns. Gardens and parks, like the Chinese Garden, are illuminated by the soft glow of paper lantern in all sizes and forms: Fish, Lion, Dragon or Swan. These paper lanterns are small wonders of creativity !

I went to Singapore a few years ago and loved it! I stayed at the Marina Bay Sands, so I enjoyed super luxurious accommodation. The infinity pool was amazing! I would’ve liked to see Little India though, I didn’t know it existed at the time… I really like Indian food, so I would’ve enjoyed smelling the spices. Thanks for the detailed descriptions and lovely photos!

Little India in Singapore is a microcosm of India itself ! This little pocket will remind you of the sights, sounds and smells of India. You can describe it as “It’s India without the cows !”

How beautiful. I love the lanterns. And the moon cakes sound delicious!

Without a doubt, mooncakes are the main highlight of the Mid-Autumn Festival ! They are best enjoyed with a strong, palate-cleansing cup of Chinese 🙂

I was in Singapore a few years ago for a couple of days, and while I hit a few of the major things you have I definitely missed some gems! I’ll be visiting Arab street and finding the Moroccan textiles when I return for sure. This reminded me of the amazing food in Singapore and how much I miss it!!

You’re right, the food is incredible there. Singapore is a melting pot of cuisines, incorporating a rich heritage of food dishes consisting of Chinese, Indian, Malaysian and Indonesian influences. The locals have extremely fussy taste buds and because of the huge melting pot of cultures that is Singapore – every taste is catered for 🙂

I love the content in this article! Singapore is one of those cities on my list that I always have wanted to visit, but have not been to yet. This article reminds me of the fact that I really have to book a flight to Singapore!

Singapore should definitely be on your bucket list. If it’s not, it soon will be 🙂 The city will marvel you with its mixture of convenience and exoticness – China Town, Little India and Arab Street will charm you with their authenticity. The best two attractions of Singapore (in my opinion) are free of charge and actually just in front of each other: The Marina Bay Sands Light and Water Show and the Night Rhapsody at the Gardens by the Bay !

This lantern festival looks incredible! Thanks for sharing.

The traditional lanterns are lighted by wax candles – you’ve got elegant paper versions or more elaborate multi-hued cellophane and wire structures shaped into everything from cars to cartoon characters: marvels of creativity, artistry and traditional craftsmanship !!

Singapore looks so vibrant and lively! I love all the interesting facts and tidbits that you included. Thanks for sharing!

A common misconception of Singapore is that the city-state is dull, without much to offer except for a stopover to other places. If you change your plans and stay a few days, you will enjoy all that Singapore has to offer: you will be gratefully surprised. The city is a melting pot of cultures with fantastic architecture 😉

I have heard so many great things about SINGAPORE and your colorful photos make me really curious now. Especially Chinatown. Man it looks so enticing.

No trip to Singapore is complete without a visit to Chinatown. Historically the area of settlement for many Chinese immigrants who arrived in the then-British colony, Chinatown is rife with both Chinese and other Asian cultures. Here, you’ll enjoy a mix of heritage visits to museums, shopping as well as a good variety of food options, sure to leave a traveller happy and satisfied at the end of the day 🙂

Those lanterns are so beautiful and delicate! Very nice photos. I’d love to try the mooncake, sounds yummy, but wow so much calories 😮

If one day you assist to this festival you’ll get to examine the real thing up close at some of the celebrations, particularly in Chinatown where large beautiful lanterns will be on display – marvels of creativity, artistry and traditional craftsmanship 🙂

Singapore is on the bucket list of places to visit for me. Thanks for the engaging post. I wonder how you were able to take such candid pictures of the locals without them “shooing” you away.

Singapore is much more than the sum of its numerous attractions. It’s constantly evolving, reinventing, and reimagining itself ! The first thing you should do when taking candid pictures is ensure that you have your subject in your viewing range while they are not paying attention 🙂

The street with a “labyrinth of colorful houses” seems right up my alley! I’ve never been to Singapore, but it seems quite intriguing. I love local markets, but I’m not so sure I could handle watching the animals killed and cut up right in front of me…I guess I’d prefer less fresh?

To most locals, wet market is a destination for freshest produce while it is a must-see attraction for a cultural experience to travelers… I’d prefer less fresh too 😉

Nice post and pics! I ve been in Singapore but I will have to come back for this festival 😉

The Singapore Mid Autumn Festival is one of the most popular events celebrated by the Singaporean Chinese 🙂 Moon-viewing parties are a popular way to enjoy the occasion, as family and friends sit in gardens lit by the soft glow of paper lanterns, sip tea, nibble on mooncakes, and if so inspired, compose poetry in venerable Tang Dynasty fashion !